This article is about the campaign level. For other uses, see Requiem (disambiguation).

Requiem is the second campaign level of Halo 4. It was first announced along with the rest of the achievements for Halo 4.[1] This is the first level that takes place on Requiem. The level focuses around Master Chief's efforts to find a way off the planet and return to Earth.

Open to debris of the Dawn and a fireball falling down to Requiem. Cut to black as the debris and the fireball impact on the ground.

Fades in to the wreckage in the area. Scene pans to an assault rifle on the ground and John-117's hand next to it. His hand stirs, and tightens. There are numerous man-sized shards of debris covering John's chest. He shoves them off and looks around. He then sits up and grabs his rifle.

John shakes his head in confusion, and pulls out the data crystal chip containing Cortana out of his helmet. Cortana's avatar appears on it.

Cortana looks down to the ground.

John looks back at Cortana.

The duo stops and looks up as they hear Covenant aircraft fly over them. A Phantom, escorted by two Banshees, fly over them at high speed.

John ventures off through the wreckage until he reaches a rocky trench.

If the player picks up a Covenant weapon:

If the player finds a BattleNet access point aboard a crashed Lich dropship which remains online.

The player activates the terminal.

The Sangheili broadcast is put through the comms system. Cortana translates.

If player proceeds to walk up the cliff side. On the other side of the crevice, a malfunctioning Covenant console can be found on top of a second crashed Lich.

John heads through the crevice and comes to a cliff pathway where gigantic Forerunner pillars can be seen floating above the valley bellow. John then heads left towards the remains of the Dawn's vehicle bay with several Warthogs strewn about, some are still intact.

John enters a Warthog and drives through the debris.

The Warthog continues through the wreckage and comes to a narrow gully.

The pair enters a grassy canyon with a small Covenant outpost.

John easily eliminates the Covenant and walks on.

John enters another canyon with a citadel like structure at its back wall. He faces various Covenant forces until he reaches the top where he kills a cloaked Sangheili Zealot.

John picks up the Active Camouflage unit and an armor diagnostic appears on his HUD.

A door opens and John enters the elevator.

John proceeds into a large room. Small pillars rise from the ground and a group of Sentinels appear.

A small alcove can be found beneath the main path. A hovering sculpture lies inside, carved in the shape of an ubiquitous Forerunner symbol and covered with glyphs, which can be examined by the player.

John approaches the Cartographer and inserts Cortana's data crystal chip into it.

John looks up as a hologram of Requiem appears over the Cartographer.

The hologram flickers to a red icon momentarily and disappears.

John activates a light bridge and reaches a power core,he activates it and his shields go down.

John kills a few Covenant troops and activates the other data field.

John clears out the Covenant troops.

John approaches the Cartographer yet again and accesses it.

Cortana's avatar appears over the console. A holographic control panel appears in front of her. She presses it, but it responds with an error sound and flickering red. The hologram of Requiem flickers red as well. Cortana tries again and succeeds. Numerous red circles appear on the surface of Requiem's hologram.

Requiem's hologram flickers red again, and all of the red circles disappear. Instead, a red sphere appears in the center of the hologram."

Cortana looks at John, and looks back the Cartographer.

Cortana looks back at him and nods anxiously.

John retrieve Cortana's data chip, turns away from the Cartographer, and walks away. As he walks away, the Cartographer emits the error sound again while the hologram of Requiem flickers to a red icon. Fades to black.

Fades from black. John is inside a small room with a door at the back and four Hardlight Shield modules on a raised platform in the center.

John exits the room, coming to a large underground cavern with a bridge bellow him spanning it. A Phantom hovers above and several Unggoy and Kig-Yar patrol the bridge.

John steps onto an elevator and descends to the bridge near some human ammo crates.

If the player jumps without the elevator:

John engages Covenant forces and works his way across the bridge and eventually reaches the end and exits through a door.

John passes another door to outside. He then eliminates the Covenant defenders, including two Ghosts and a Shade turret, and enters the colossal tower-like structure

John moves up a series of indoor and outdoor staircases and comes to the tower entrance where a Hunter pair is engaged in a firefight with several Sentinels.

The set of doors open and John enters a large room. He follows orange lights across the floor to an elevator.

John steps on to the elevator, which soon ascends into the long shaft.

The elevator reaches the top, and Johns leaves the platform to walks across a long bridge. John looks around him. There are countless pillars in the room. John reaches the end of bridge, and inserts Cortana's data chip in to the Terminus console. The Terminus activates, and the Forerunner structures around them adjust themselves.

A holographic display of the Forerunner symbol for Reclaimer appears in front of Cortana's avatar.

Cortana accesses the holographic control panel in front of her, and a large sound of activation is heard. John turns around to see the pillars in the room raising to different heights.

Several large Forerunner humanoid figures, lit in blue, with the exception of their orange-lit right arms, teleport on to the top of the pillars in the room. They each emit a growling sound. John raises his assault rifle in alarm.

Cortana remains silent as she continues to access the control panel.

A portal appears beside John. Cortana turns around in confusion."

John takes Cortana's data crystal chip as one of the creature that is standing on one of the pillars closer to him screams. John raises his assault rifle at the creature, which teleports away. John stares in awe.

Chief runs and jumps into the portal. Cut to black.

Similarly, if you try to bring the banshee out of the valley through the door (by meleeing it’s wings off), during the loading, the player will suddenly disembark from the banshee, followed by the banshee automatically exploding. 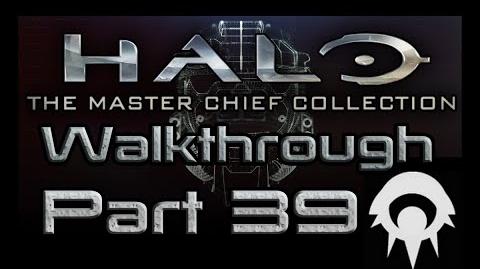 Retrieved from "https://halo.fandom.com/wiki/Requiem_(level)?oldid=1817369"
Community content is available under CC-BY-SA unless otherwise noted.