Looking for the Halo 2 Vista achievement, or the Activation Index?

The Surface of Installation 05, near the library.

The Battle of the Quarantine Zone

Sacred Icon is the tenth campaign level of Halo 2. As Thel 'Vadamee, you make your way through a wall filled with Sentinels and the Flood, ending in an open-air Elite encampment. You must defend it successfully from the Flood onslaught before the next level Quarantine Zone starts. This is the first and only level where Jackals will be your allies. This is also the first of three levels with Human enemies ever in the whole series.

Fade in on Covenant structure.

Camera pans down, we see a large hallway with rows of Honor Guards, Thel 'Vadamee walks through, close up of 'Vadamee.

Vadamee watches as the Jiralhanae take Honor Guard equipment from the Elites. Some Brutes fight each other for choice parts. As 'Vadamee ascends the stairs leading to the Prophet's Inner Sanctum, a pair of former Honor Guard Elites pass by him, without their helmets and carrying Plasma Rifles instead of Energy Staves. 'Vadamee walks through a large doorway, past the new Honor Guard Brutes to where the Prophet of Truth and Mercy speak with Rtas 'Vadumee and two of his Spec Ops Elites.

Prophet of Truth holds up a hand for silence.

Rtas 'Vadumee and his Elites leave. He nods to 'Vadamee, who returns the nod. Prophet of Truth speaks to the Arbiter.

They turn to a large view screen of Delta Halo.

They turn toward 343 Guilty Spark, who seems to have been suspended in a gravity beam.

Mercy triggers a hologram of the Index

Fade to black, fade in on Delta Halo. A Phantom flies toward the surface. Cuts to Phantom interior.

Focus on 'Vadamee, zoom in as he speaks.

'Vadamee draws a Carbine and readies it.

Cut to exterior panoramic view of Delta Halo's Library, with the Sentinel Wall in the foreground. The Phantom flies towards the Sentinel Wall and stops over a landing. A battle has been fought here recently, as evidenced by Sentinel wreckage and Covenant blood on the ground.

'Vadamee drops from the Phantom, which then flies off. Behind 'Vadamee, an Enforcer rises up and slowly advances. 'Vadamee whirls around and fires three shots from his Carbine, to little effect. Suddenly, the Enforcer is hit by a sustained burst of plasma fire and loses its right-back leg. The Phantom flies by, and the Enforcer chases after it.

After the Arbiter jumps into the passageways moving downward, and the first room, he meets a Grunt, who greets him.

After the Arbiter enters the next room, he finds a group of Grunts and Jackals fighting Sentinels. After he defeats the Sentinels and cuts off any more from entering, a Grunt might speak to him.

If the Arbiter stares at the Grunt long enough, or just waits around:

When the Arbiter moves into the next room:

When the Arbiter stands near the Grunt running toward him

When the Arbiter reaches the Shield Generator

An Enforcer descends from above

After the Arbiter destroys the Enforcer

After the Arbiter overloads the last one:

The Arbiter uses the holo-panel. The platform starts moving and the door in front of him opens.

The Arbiter looks up, and sees the bright-green shield surrounding the Library fading away, followed by Tartarus' Phantom flying lower towards the other side of the wall.

The door of the approaching wall opens to another Enforcer firing on the Phantom.

The Phantom leaves, followed by an attack by Sentinels, Sentinel Majors and a break-out of Flood Combat Forms.

Once the Arbiter gets through the wide-opened door in the wall, he reaches a piston at the other end.

As 'Vadamee proceeds through one of the hallways below, his COM link picks up a Marine's transmission.

After 'Vadamee reach the next bottom floor:

The Arbiter fights through hordes of Flood, Sentinels and Enforcers. He finally drops down to a long tunnel, and reaches the bottom of the wall.

As soon as the doorway opens, an airborne Sentinel manufacturing facility can be seen in the distance as it is shot down by Wraith mortars and crashes into the Quarantine Zone.

The Arbiter proceeds through the snow. Orbital Insertion Pods land across the canyon.

With the Elites' assistance, the Arbiter defeats small waves of Flood.

The Arbiter crosses a bridge and through a tunnel, and meets the Spec Ops Commander, Rtas 'Vadumee.

Rtas 'Vadumee is interrupted by screeches of the Flood.

After the fight has gone on for a while, a Phantom descends from above, firing on any remaining Flood in the zone. Fades to white.

A Phantom Heads To Delta Halo.

An Enforcer sneaks up on the Arbiter.

The Abiter's allies in Sacred Icon, with two alive Jackal Majors and a Grunt Major.

The chamber with the power source controls.

One of the numerous Energy Alleys encountered throughout the level.

Concept art of the Library.

An Enforcer sneaks up on the Arbiter.

Rtas 'Vadum protests the Changing of the Guard. 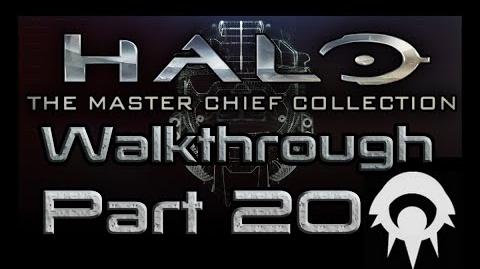