Sanctuary is a symmetrical map, making it ideal for Slayer, Territories, and CTF gamemodes. Both bases contain the Battle rifle, a turret, and a flag spawnpoint to the rear of each base. A walkway connects each base with a smaller structure that contains the sniper rifle. Under the structures is a tunnel that holds the shotgun and can provide a good escape route if you're overrun by the opposing team. The center building connects to the smaller structures via two more elevated walkways that spawn plasma pistols and two ramps that lead to the side of the map that each hold a Covenant carbine. The center building spawns the map's only Energy sword above the pond on the bottom floor.

Being set on Delta Halo, the architecture is similar to the structures seen in the campaign. Sanctuary features an aqueduct system that feeds into the pond in the center. Waterfalls are also seen feeding into the pond that surrounds the Blue base, while the pond around Red base is dry. Large boulders and ruined pieces of the structures litter the open areas of the map, showing the conflict that had engulfed the area before the arrival of both human and Covenant forces.

Overhead view of the map.

Another view from Sanctuary. 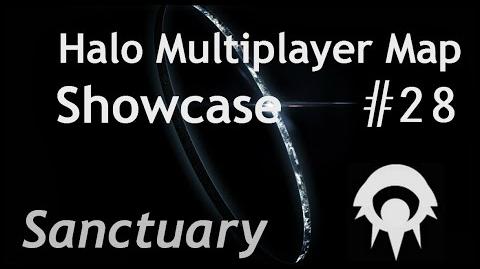