Unknown world, possibly on one of Te's moons

Sandbox is a map that is included in the Mythic map pack.[1] It was stated by Bungie to be the "ultimate Forge map." Sandbox was released to Xbox Live Marketplace on April 9, 2009.

Sandbox's setting and architecture are similar to Sandtrap, but its forging capabilities greatly surpass Foundry. The map consists of three distinctive layers: the main ground area best for vehicle-based maps, the "Sky Bubble," a location high above that can be used to create floating maps with falling death barriers, and "The Crypt" underneath which is the best way for making enclosed arenas. The layers are separated by default, but can be accessed and connected in Forge.[2]

Sandbox, along with the other two Mythic maps, Assembly and Orbital were shipped with the Limited Edition of Halo Wars. These maps were then released on Xbox Live Marketplace on April 9, 2009. The release date for the other three Mythic maps was released with Halo 3: ODST on September 22, 2009.

Sandbox is set in the midst of a barren desert surrounded by many rolling sand dunes, similar to Sandtrap Large Forerunner towers can be seen in the distance. Bungie hinted that, similar to Sandtrap, the Covenant may have also conducted archaeological excavations here.[3] The map is based at sunset, with a ringed gas giant in the sky, and a setting sun on the horizon.

Sandbox's watchtowers have the ability to seek out and kill players if they move outside Sandbox. If the player moves outside of the barrier, the watchtowers will shoot out yellow lasers which will instantly destroy them, even if they are inside a vehicle (although these watchtowers can be blocked off or overloaded in Forge).[4][5]

The default Sandbox is perfectly symmetrical, and considered by Bungie to be a medium-large map. It contains two bases opposite each other, with cover laid in between. Over each base floats a colored light. One light is blue, and one light is red. The map's vehicular arsenal includes a Chopper, Warthog and two Mongooses for each team. Infantry have access to Rocket Launchers and Missile Pods to counter them, and an Overshield is located on top of a pillar in the center of the map.[6]

The structures are similar to Sandtrap's, being constructed of weathered rock and other similar materials. The surrounding terrain is composed of sand dunes, with large Forerunner walls in the distance. In Forge, the default Sandbox has a grid to help line up objects.

The Sky Bubble is an area in Sandbox located high above the ground level. This region can be reached via built-in teleporter in Forge, allowing game-play on both the normal map and the Sky Bubble at the same time. To aid in the forging process, the Sky Bubble has another grid system to help line up objects. It should be noted that all objects besides those in the scenery menu will fall through the grid onto the lower level.

The Sky Bubble is about three times larger than the ground area of the default Sandbox. Although at first glance the skybubble may seem to be circular, it is actually a 36-sided regular polygon. The distance from the center to a corner of the bubble is about 66.4 grid units, making its area roughly 13,851 grid squares.

The tops of the watchtowers from the ground floor are higher than the "ground" of the Sky Bubble; they cast light over the area. When the player falls off the edge of objects he or she has placed, there is a death barrier between the Sky Bubble and the ground below, so maps like Guardian and Ascension could be accurately remade. This particular barrier has only placed under the grid area however, making it possible for players to use the outside of the Sky Bubble as a means to traverse between the ground floor without the use of a teleporter (provided that they have built a protective barrier against the watchtowers or permanently overloaded the map). Despite the huge distance, weapons capable of sniping are able to scope the distance between the ground floor and Sky Bubble with a degree of proficiency.

The Crypt is a large, enclosed area located under Sandbox. It can be accessed by removing the flat block in the center of the map (if you prevent it from spawning at start it will still be there and you can't delete it, can be fixed by starting a new round) and dropping down the shaft, which is very long and dark. The Crypt has the exact dimensions of a Grifball court. The floor is square-shaped and the height is the same as the width. The blue grid also appears down in the crypt.[2]

The Crypt has a very high ceiling, and the walls seem to be constructed of black stone. There are UNSC floodlights in the walls that emit an eerie glow in the area. Since the Crypt can be accessed via teleporter and the shaft, it is possible to play in the Crypt, the ground level, and the Sky Bubble in one map.

Note: When forging the only way to access the crypt is to either remove or delete the center block that covers the shaft. Using the Flat Block forge item you can re-cover the hole, but it can be difficult to get the block back in place. A good trick would be to simply cover the hole with a flat wall, or merge other objects into the shaft via Ghost Merging.


Helpful tip: If you've removed all spawn points from the map you can access the crypt by changing teams until you spawn inside it.

Note: The Crypt is the smallest of the three levels.

The golden stripes in the Crypt's walls are covered in an alien text. Through the text, a moving, glowing texture can be seen.

“"Sandbox combines large-scale vehicular combat with a limitless amount of Forge customization. Boasting a tiered, open-world layout, “Halo 3” players will be able to build their own unique game experiences using the Forge map editor. Sandbox is a map unlike any Bungie has ever created."”
— Bungie.net[7]

The center of the main level of Sandbox is a flat, empty floor, similar to Foundry, but visually resembling Sandtrap. The map is built from Forge-editable blocks, pillars and ramps. The map includes "just about every kind of building block you could ever want," for example tunnels, crouch-only doorways and quarter-pyramids; see here for a full list. The item limits have been loosened; for example, unlike Foundry's 20 wall limit, it is possible to place 40 walls in Sandbox. Sandbox also supports every vehicle in Halo 3 Multiplayer except the Elephant.

A new Forge item included in Sandbox is an orb of light that colors its surroundings in either red or blue; it can be used to differentiate the two bases, similar to most maps made by Bungie. Another is the Kill Ball, a large orange sphere that kills anyone who comes into contact with it. A golf club (called the 7 wood) that acts like a Gravity Hammer, a golf ball, and a cup to hit it into are also available. The cup is like a magnet to the golf ball; if the ball touches the grassy part of it, the ball will automatically roll into it. It takes two swings to get it back out. Like the Soccer Ball, it is purely for aesthetic purposes and in no way will score you a point. In Forge mode, a blue grid appears on the map to help the player place objects the way they want it with accuracy and precision. Also, it takes 3.5 seconds to fall to the bottom of the crypt (3.5x2- a 7 reference). It takes 10 seconds to walk from one side to the other.[6][8][9]

The Grid only appears in Forge, not in actual gameplay modes such as Slayer, Capture the Flag, or Infection. There are many new items to be placed in Forge. These are mostly Sandtrap-themed (as well as Ghost Town-themed wooden objects), to keep within the style of the map.

Grifball in the Crypt.

The watchtower emitting a laser beam. 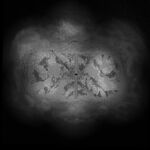 The Sky Bubble in Forge.

The Sky Bubble and the grid in Forge.

The crescent in the sky.
Add a photo to this gallery 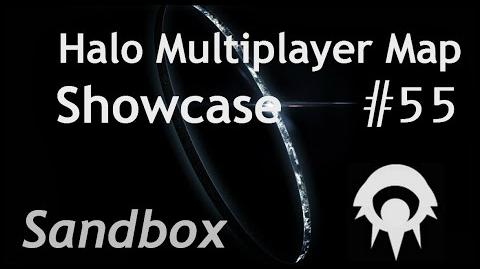 Retrieved from "https://halo.fandom.com/wiki/Sandbox?oldid=1802136"
Community content is available under CC-BY-SA unless otherwise noted.