Sandtrap is set in a vast desert with rolling sand dunes and some enigmatic half-buried structures. They have obviously been dulled and eroded by the sand to quite some extent, suggesting that the structures are very old, possibly older than some Forerunner structures. They may have been built merely as temporary shelters or possibly bunkers. They could also be ancient Forerunner structures (similar to human castles in our time), making it an archeological site (explaining the "modern" towers surrounding the site). Another possibility is that these structures were built by the Precursors before the Forerunner's rise to power. The origin of these structures is unknown, but they bear certain similarities to the "temples" on Installation 05.

It features odd Forerunner constructs and is encircled with a minefield that features vertically launching mines to prevent players from venturing beyond its boundaries. Six large towers surround the outer extremities of the map, all connected by a large wall. The purpose and origin of these structures is unknown. The September 7 EGM stated that this was the site of a Brute excavation and UNSC forces (deployed from the frigate UNSC Aegis Fate, which hovers in the sky above the map) came along and removed them; remains from both sides' forces can be seen in the form of a crashed Phantom and a crashed Albatross.[2] It has a heavy emphasis on vehicular combat. All of the forgable vehicles available at the time in the game are on this map - for example, the "bases" are a pair of UNSC Elephants at opposite ends of the recently unearthed Forerunner ruins. There are also some very interesting sniper spots. For example, if you are inside of the crashed Phantom, it will be hard for other players to see you and the location gives you a very interesting view to take down some unsuspecting players.

Also, a large hill gives you a good view over the field from overhead.

According to the holographic displays stationed on the lower sections of both Elephants, Sandtrap has an atmosphere which is mainly composed of CO2 and other gasses inimical to unprotected human life. This may mean that Sandtrap is not located on the Ark, or that it is located on a previously unseen section of the Ark with wholly different atmospheric characteristics. Simple equipment malfunction is another possibility, as the artificial nature of the Ark may well play havoc with instruments designed for use on conventional worlds.

Outside view of Sandtrap.

One of the two green square objects under Sandtrap.

One of the six Da Vinci Eggs on Sandtrap. 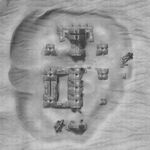 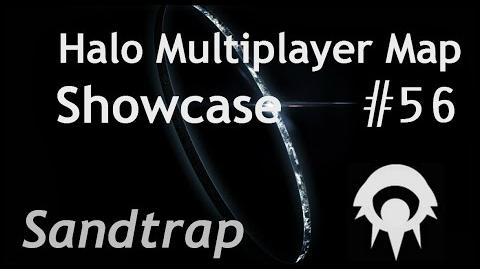