The Sangheili-Jiralhanae war[5] was a major conflict between the Sangheili and the Jiralhanae after the events of the Human-Covenant war and a continuation of the Great Schism.

Tensions and rivalry already existed between the Sangheili and Jiralhanae, long before the Human-Covenant war. However, it was the Changing of the Guard that eventually lead to actual battles between the two species. This event helped split the Covenant Empire, by ejecting the entire Sangheili species, and ultimately end the Great war.

Fighting continued directly after the end of the Great Schism. Initially the Jiralhanae were winning due to the remaining Prophets providing organization and resources, but the tables turned when they went into hiding. The Jiralhanae started fighting against each other giving the Sangheili the advantage.[5]

The Covenant had settled the Jiralhanae on resource-rich worlds.[6] However, since the Jiralhanae are "decades behind the other Covenant races technologically," they had to steal supplies from the Sangheili because they did not have the ability to mine and use the resources they already possessed.[6] Since the Jiralhanae had little communication within their kind,[7] these attacks were highly disorganised.

Massacres Against the Jiralhanae Edit

At the start of the war, some fanatical Sangheili embarked upon a genocidal campaign hunting down and killing all Jiralhanae they came across. One radical group of Sangheili were the Silent Shadow squad under the command of Resa 'Azavayl, fueled by vengeance they sought to slaughter any Jiralhanae they encountered. They had wiped out Jiralhanae forces and their subordinates on an armory near Victors' Truth, the Corvette Adherent, the northern highlands of Thalia, and a substation orbiting Sansar. 'Azavayl's Silent Shadow squad even eradicated the former Chieftain of the Jiralhanae Tartarus' crew aboard the CCS-Cruiser Rapid Conversion.[8]

Massacres Against the Sangheili Edit

In 2553, two hiding San'Shyuum had many Jiralhanae forces working for them. The two San'Shyuum: Boru'a'Neem and Prelate Tem'Bhetek, sought revenge against the Sangheili species for the destruction of High Charity and the Covenant Empire. 'Bhetek's family was killed in the Flood invasion of High Charity, and he held Shipmaster Rtas 'Vadum and the Fleet of Retribution responsible for it.

'Bhetek and his Jiralhanae forces attacked Rahnelo killing many Sangheili civilians in hopes to draw out attention from 'Vadum's CAS-class assault carrier Shadow of Intent. 'Vadum with the help of his crew and a Rahnelo Scion Sangheili female named Tul 'Juran, pursued 'Bhetek when they were ambushed at Duraan. Another battle ensued between 'Vadum's Sangheili forces and 'Bhetek's Jiralhanae forces. 'Bhetek was captured but escaped and regrouped with 'a'Neem only to be betrayed by him. 'a'Neem ordered Yanme'e forces to open fire and mortally wound 'Bhetek. Bleeding and slowly dying, 'Bhetek listened as 'a'Neem revealed his plan to use a miniature prototype Halo ring to genocide the Sangheili homeworld. These plans were foiled as 'Vadum and 'Juran invaded the miniature Halo ring and killed 'a'Neem. Devastated by his betrayal, 'Bhetek forgave 'Vadum and sacrificed himself by blowing up the miniature Halo as the Sangheili escaped.[11]

Following the conflict, 'Vadum had grown tired of war.[12][13] He was debriefed by his comrade, friend, and now superior: Arbiter Thel 'Vadam. 'Vadum told 'Vadam that he will seek out more hiding San'Shyuum, but this time he would determine which ones are innocent and which ones are guilty to prevent more needless suffering.

In order to try and establish an agreement, the Swords of Sanghelios requested several high-ranking humans of the UNSC to sit in their discussions and mediate negotiations on the neutral planet of Ealen IV.[7] On part of the humans, Admiral Terrence Hood and Captain Thomas Lasky were chosen as negotiators, the Sangheili were represented by Kaidon Thel 'Vadam and the Jiralhanae by the Elder Chieftain Lydus. They agreed also that each faction should have a strong military force, Spartans, Sangheili Commanders and Jiralhanae Captains alike.

The negotiations were soon attacked by Banshees from Vata Gajat's Mercenary Group, killing multiple Sangheili Commandos.[14] The Jiralhanae Lydus assumed Thel 'Vadam was behind the attack, but Thel denied this accusation and started fighting the Remnant forces as well.[15] Despite surviving the attack, no peace agreement between the Sangheili and Jiralhanae was reached.

In 2559, some Sangheili had resumed hostility, and were winning in their genocidal campaign against the Jiralhanae as the latter had splintered and begun to fight among each other.[5] While the lack of Jiralhanae solidarity gave the upper hand to their Sangheili opponents, ironically the Sangheili had already been fighting amongst each other for several years as well. 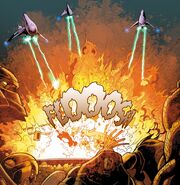 The destruction of Infinity's shuttle.
Add a photo to this gallery

Retrieved from "https://halo.fandom.com/wiki/Sangheili-Jiralhanae_war?oldid=1813388"
Community content is available under CC-BY-SA unless otherwise noted.