The Combat Harness is the standard armor system used by the Sangheili soldiers of the Covenant Empire, the Sangheili Armed Forces, and Covenant remnants.

The Combat Harness is worn by the majority of infantry ranks from Sangheili Minor to Ultra and Zealot, with the damage each can take and the armor's shielding increasing in power with rank (with the exception of Stealth Sangheili), and comes in a variety of colors denoting said rank. Some versions have Active camouflage built in and others have flashlights. A Major's shields are around 50% stronger than Minors while Ultras are that much stronger than the Majors. After Ultras it isn't such a big number and varies with the Zealot types. Its primary emphasis, to be iconic and inflict psychological trauma, can be linked back to the martial/physical pre-eminence of the Sangheili people. This helmet has remained virtually unchanged for eleven hundred cycles, and the thoracic cage has remained unchanged for fifty generations.[1]

The armor used by the Sangheili in Halo: Combat Evolved has a few differences from the armor used in the later games: some Sangheili have a "curled back" headpiece, different thigh armors, and smaller shoulder pieces. They also have armor with a three-pronged design. In addition, they have orange glowing sections on their arms and legs, which often give away their position. Their eye color is also the same as their armor color, for example: an Sangheili Minor with blue armor will have blue eyes.

In Halo 2, there are no curled headpieces and the eyes are not the same color as the armor, rather a dark purple or black color. Also, the shoulder pieces are larger than in the previous game. They also have glowing orange sections on the backs of their legs and on their arms which act as shield indicators, glowing brightly when the shield is fully charged and dimming or going out altogether depending on shield level.

In Halo 3, the Sangheili's armor is again altered. The armor now includes even larger shoulder pieces, longer and more numerous spikes on the headpiece, and a small tube connecting to each bottom mandible guard. The tube is only included in the Halo 3 incarnation. There is also a horizontal light on the chestpiece. The large orange shield indicators are replaced by two small green lights on the Sangheili's back and on their chest plate, which are dull when the shield is fully charged and glow bright when the shield is depleted.

In Halo: Reach, the Sangheili Combat Harness is different from the earlier incarnations in a number of ways. The other types will also be much more varied, depending on the Sangheili's rank or specialty but the Minors still use the standard Combat Harness available to the player regardless of rank. Also, like most other Covenant technology in Halo: Reach, the Combat Harness now has a scale-like pattern on it. Another addition to the armor is the Energy Dagger which emits from the wrist gauntlet.

In Halo 4, the standard Sangheili combat harness of Jul 'Mdama's Covenant are lighter and less protective than standard Sangheili armor, leaving multiple body parts such as the arms, neck, midriff, and portions of the legs exposed.

Unlock: Starter.
The helmet is largely angular, featuring a set of spikes at the rear of the helmet and a pair of cheek guards. It features a metal plate guarding the jaw.

Unlock: Starter.
The Shoulder Pauldron is a set of overlapping plates that spike both upwards and downwards and to each side.

Unlock: Starter.
The Thoracic Cage is made up of a pair of plates over each side of the chest with a gap and a pair of rectangular lights heading downwards on each side. 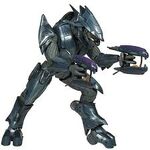 An Sangheili Combat figure made by McFarlane Toys. 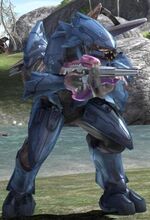 N'tho 'Sraom in Combat armor.
Add a photo to this gallery

Retrieved from "https://halo.fandom.com/wiki/Sangheili_Combat_Harness?oldid=1793522"
Community content is available under CC-BY-SA unless otherwise noted.