This article is about the Sangheili rank. For more articles of the same name, see Honor Guard.

— Arbiter Thel 'Vadamee talking to the Prophet of Truth[1]

Until the Changing of the Guard, these Sangheili were the personal bodyguards of the Prophet Hierarchy. The Jiralhanae replaced them after the death of the Prophet of Regret,[1] in what many viewed as a carefully planned coup that eventually devolved into the Great Schism. It seems that wherever a High San'Shyuum goes, the Honor Guard accompany them. There could be as many as 300 Honor Guards for each San'Shyuum, as the Sanctum of the Hierarchs can hold 300 Honor Guards.[2]

If anyone pulls out a weapon in the presence of a Hierarch, the Honor Guard's immediate response is to defend the San'Shyuum by eliminating the threat no matter the odds. This can be seen slightly when the Arbiter Ripa 'Moramee ignites his Energy Swords in front of the Prophet of Regret, and also when Zhar attempts to kill Truth.[3] In addition to that, they also keep order during important meetings within the High Council. Although a great honor, it is seen by some Sangheili as a merely ceremonial duty and a way to silence those who perhaps see a little too clearly in the Human-Covenant war.

The highly ornate armor of the Honor Guard has colored a combination of glowing red and orange. It features jutting spikes and pauldrons, indicating that the rank of Honor Guard is not only meant for combat but is also a position of great pride and honor. However, they also seem to wear an armor type similar in color and design to the Sangheili Minor armor.[4] They also seem to always have a staff which doesn't prove very effective in combat, but perhaps is intended to be ceremonial.[5]

It is unknown how a member of the Honor Guard ranks in comparison to the normal chain of leadership, but it is assumed they are equivalent to a Sangheili Ultra, or slightly below the Arbiter. They are commanded by the more skilled Lights of Sanghelios.

Honor Guard Sangheili is a playable unit in Halo Wars and are the leader-specific unit of the Prophet of Regret. They wield Energy Swords and deal a tremendous amount of damage to infantry. They are trained directly from the Covenant citadel.

Honor Guard Sangheili stand on guard during the judgment of the Arbiter. 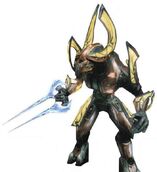 The Honor Guards in Halo Wars, protecting the High Prophet of Regret.

A Squad of Honor Guards.

John-117 facing an Honor Guard in a pre-released Halo 2: Anniversary.