The Sangheili Major, also referred to as Sangheili Officer,[1] is a Covenant rank and Swords of Sanghelios Sangheili rank, and are also a higher rank than Minors. 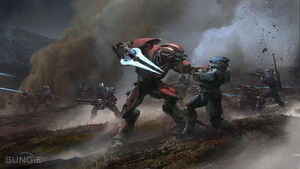 Majors are warriors whose rank is medium-low in the Covenant Sangheili rank structure, but are higher ranked than a Sangheili Minor. Only a Major can obtain the temporary rank of Ossoona, mainly due to the fact that a more seasoned warrior prefers combat, not stealth, and a Minor is too inexperienced to become the Ossoona. They usually command groups of Minors as well as other Covenant races in ground combat situations. In addition to commanding ground forces, Majors may also occupy the role of a "second-master" on a starship,[2] effectively acting as the Shipmaster's second in command.[3]

They are far more intuitive and quick-thinking than their subordinates. A single Major is capable enough to survive against an entire squad of Marines. To Humans, they would be and are considered Lieutenants in the Covenant. The rank of a Major can be compared to that of a Jiralhanae Ultra. On lower difficulties of both Halo: Combat Evolved and Halo 2, Majors are rarely seen without a Minor present. However, on the higher difficulty levels (Heroic and Legendary), these Sangheili are more numerous than Minors, in order to increase the difficulty of the game.

Enemy Majors (encountered throughout Halo: Combat Evolved and in Halo 2 only when playing as John-117) are only found wielding Plasma Rifles, Needlers, and sometimes Carbines. Majors can sometimes be found duel-wielding Plasma Rifles instead of just wielding one. Oddly, they carry Plasma Grenades, but never seem to use them. When the player encounters them as Thel 'Vadamee, they, like all Sangheili allies, can be made to use any weapon. They can even be made to use the Energy Sword and will sometimes spawn with them on the levels Regret and Delta Halo. This is strange because only the highest ranking Sangheili are allowed to wield Energy Swords. However, given the circumstances at the time, they may have been allowed to wield them.

Majors have more powerful Energy shields than their blue-clad Minor subordinates, as fitting with their rank. Their shields are 50% stronger than those of standard Minor, and in Halo 2 their shield strength is identical to that of the Honor Guard Sangheili, Halo: CE Zealots, and Heretic Sangheili Majors. On lower difficulties they can take a maximum of three hits on the body, or a single head-shot from the Sniper Rifle or Beam Rifle, and, in higher difficulties, they can take up to four body shots and two headshots. On Heroic difficulty their shields can withstand about 30 rounds of MA5B Assault Rifle or M7/Caseless Submachine Gun fire, or 7 to 9 Plasma Rifle bolts, with a handful of additional shots required to deplete their health and kill them.

In Halo 3, when Majors are dropped into battle to aid John-117, they always wield Plasma Rifles and occasionally Covenant Carbines (they also pull out Energy Swords when killed) although the player can always exchange weapons.

Majors fire in sustained bursts and evasively strafe while shooting. They rarely make tactical mistakes, such as charging directly into a fight, or forgetting to take cover. On higher difficulty settings, it is very dangerous to face a Major, as the quick bursts fired by Majors can deplete shields in a matter of seconds. It's even more dangerous to face a Major duel-wielding Plasma Rifles on higher difficulty settings, as they can easily kill you in a matter of seconds as well.

Much like Minors on higher difficulty, they will attempt to lure the player into the open. They do this far more often when they have support from significant threats such as Mgalekgolo, groups of Yanme'e, or Kig-Yar snipers, but almost never attempt it while alone.

The same tactics used to kill Minors can be used against Majors as well. However, their stronger energy shields make them more resilient to damage. For example, in Halo: Combat Evolved on Normal difficulty, it takes eight headshots from the M6D pistol to kill a Major, compared to six for a Minor. Furthermore, the Sniper Rifle takes two headshots on Heroic and Legendary difficulty. However, the "Noob Combo" is just effective as it is against as any other Sangheili, as the Plasma Pistol's charged shot instantly disables any shields regardless of strength or difficulty.

On the Halo 3 level "The Covenant," a worthwhile tactic is to give Sangheili Majors heavier weapons, such as Fuel Rod Cannons, as they will be able to use the weapons more effectively than Minors during the attack on the towers.

Majors are clad in red (specifically crimson or scarlet) armor, comparable to the red armor of Unggoy Majors. Majors in Halo 3 are shown wearing one of 2 variable armor colors. Some Majors are seen wearing metallic crimson and others are seen with metallic maroon colored armor, but both have white symbols on the front of their chest armor. In Halo 2, Majors have bright orange-red or red armor. Like Minors, the symbols in Halo: Combat Evolved had Forerunner letters, while in Halo 3 they glow a greenish color.

In Halo: Reach, the Sangheili Majors' (Now called Officers) combat harness is slightly different from the standard combat harness. The shoulders are slightly larger and more pointed at the separated tips. The helmet is more decorative, elongated and has an extra straight piece running the length of the helmet. Their armor's color is a pattern of gold, orange and red.

A Major in New Mombasa.

An Sangheili Major on Installation 00.

This image shows the color differentiation of the Sangheili Majors armor.

A group of Sangheili lead by a Major on the level The Covenant. 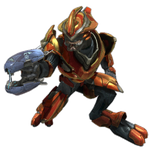 A Sangheili Major, as they in Halo: Reach.

Two Army troopers firing upon an Officer as it is being assassinated by SPARTAN-B312.

Concept art of a Sangheili Major in Halo: Reach.

The Sangheili Officer armor permutation available with the purchase of the Limited and Legendary editions of Halo: Reach.

A Sangheili Major in combat.

A Major wielding a Sniper Rifle in Halo: Reach

Close up of a Sangheili Officer 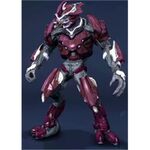 An upclose of the Sangheili Major.

A Sangheili Major along with a Minor approaching John-117 in a pre-release Halo 2: Anniversary.