Not to be confused with the Swords of Sanghelios.

Possibly September 22: After Battle of Installation 04 and Meeting 343 Guilty Spark at the Threshold gas mine

“Our Prophets are false! Open your eyes, my brothers! They would use the faith of our forefathers to bring ruin to us all!”
— Heretic Leader Sesa 'Refumee

In the wake of the Battle of Installation 04, Sesa 'Refumee formed a separatist faction considered to be heretics by the Covenant, comprised of Sangheili and Unggoy. They had been considered to be enough a threat to the Covenant religion that the Prophet of Truth sent the Arbiter to eliminate their faction.

Originally, these heretics were a Covenant artifact retrieval team attached to the Fleet of Particular Justice and led by Sesa 'Refumee. They were investigating a Gas Mine on the planet Threshold when the UNSC Pillar of Autumn crashed on Halo. When John-117 destroyed Halo, the team was spared from death, unlike their compatriots on the ring.

A few days later, the retrieval team located the Monitor of Installation 04, 343 Guilty Spark, floating adrift in the wreckage of Halo. Spark promptly took command of the Sentinels running the gas mine and cheerfully informed the artifact retrieval team of the true purpose of the Halo Array, utterly destroying their faith in the promised "Great Journey."

Disillusioned with the lies of the Prophets and their Great Journey, 'Refumee initiated an open rebellion against the Prophet leadership and the basis of the Covenant. In secret, he sent holographic recordings to other Sangheili, hoping to open their eyes as well. In the meantime, he strengthened the defenses of the gas mine, fortifying it with Plasma Cannons and a large complement of Banshee fighter craft in anticipation of the Covenant's retribution for heresy. He also had at least one Seraph fighter, as seen in the docking bay.

It is unclear how many more Elites 'Refumee was able to sway to his cause, but one of the Sangheili he attempted to bring to his cause instead turned the holo-recording over to the High Prophets, who decided to put an end to 'Refumee's faction, with two other former commanders of the Fleet of Particular Justice: the disgraced Thel 'Vadamee, now the Arbiter of the Covenant, and Spec-Ops Commander Rtas 'Vadumee.

Whilst inhabiting the mine, the heretics discovered that the facility had a secondary purpose: a Flood research facility was built into the mine as part of the Forerunners' attempt to find a way to destroy the Flood. The Arbiter and 'Vadumee arrived at the facility with orders to annihilate all Heretics. Accompanying them were three Phantoms full of Spec-Ops Sangheili and Unggoy, fighting through a large contingent of Heretic soldiers whilst chasing 'Refumee throughout the facility.

Whether by accident or design, the heretics released the Flood upon themselves shortly before the Arbiter's arrival - creating a deadly triangle of conflict as all sides attempted to destroy the others. Despite heavy resistance from the heretics and the Flood, the Arbiter was able to kill Sesa 'Refumee and destroy the gas mine completely by severing the support cables maintaining the facility's position.

This was a crippling blow to the heretics as a faction. It is possible, though unlikely, that some survived, as Halo 2 Multiplayer maps state the heretics operated a base on Basis as well. In addition, it is not unfeasible that some of the survivors of the faction may have joined the Covenant Separatists during the Great Schism and possibly the Swords of Sanghelios after the war.

Having abandoned the inclusive culture and ideals of the Covenant entirely, Sesa 'Refumee decided to carry a new banner for his troops: the beige and gold colors of the original Sangheili homeworld. The Elites and Grunts donned new armor of these colors as well as outfittings to help them survive in the Hydrogen atmosphere of the Threshold Gas Mine. The armor, although protective, appears to be much more ornate and ceremonial than the Covenant standard issue armor, although the armor also may be re-painted and stripped down from the original Covenant armor. It appears, however, that the armor resembles greatly that worn by the Sangheili clan in Halo Wars: Genesis. It is plausible that their armor is in fact a clan-based armor that the Elites use outside of the Covenant military structure.

Apart from their different armor and banner, the heretics rarely ever use the standard Covenant Weapons. The Elites are equipped with Carbines, sometimes Sentinel Beams, and Energy Swords, instead of Plasma Rifles (Sesa 'Refumee not included), and the Grunts are equipped with Needlers instead of the Plasma Pistols they were given by loyalists, as well as Fuel Rod Cannons for anti-vehicular purposes.

The heretics also changed the appearance of their vehicles: the Type-26AZ and BZ Banshees had much of their external plating ripped off, revealing the Forerunner based workings within. They were also repainted to bear the colors of the Heretics and the Sangheili world.

Heretics only appear in two levels, The Arbiter and The Oracle. Different heretical characters have appeared throughout canon however, though not of this group.

There are 1-2 Heretic Banshees on the last level of Halo 2, The Great Journey. You can find them at the bottom of the cliff near the Scarab through a glitch.

Heretic Grunts wield Needlers, Fuel Rod Cannons, and they can also man Plasma Cannons. They have never been seen using Plasma Pistols, the weapon more commonly used by their regular, non-Heretical counterparts, although a fair amount of Plasma Pistols are scattered throughout their base of operations. The most common weapon used by them is the Needler. They are also not as suicidally stupid as their Covenant counterparts, and they never panic or run away (despite that they still could say He dead? Me run! when a heretic Elite is killed). They are also noticeably tougher and harder to melee due to their reduced armored re-breathers. Their masks do not cover their entire mouths as those of Covenant Grunts do.

Heretic Elites seem to use either Covenant Carbines or Sentinel Beams and occasionally the Energy Sword. This probably means they use reloadable weapons instead of making multiple weapons. Apart from the Heretic Leader himself, they never use the Plasma Rifles wielded more often by their regular counterparts, although if you board a Banshee piloted by one, the pilot will be wielding one. Heretic Elites have three ranks. Brown Elites are the equivalent of a Loyalist Elite Minor and the gold is the equivalent of a Loyalist Elite Major. The red armor is only worn by the Heretic Leader.

Heretic Elites' bodies are slightly more exposed than Covenant Elites, as they wear less armor. However, this does not make them any easier to kill than their Covenant counterparts. 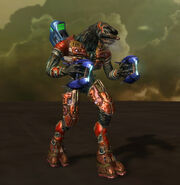 Heretic grunts dancing.
Add a photo to this gallery

Retrieved from "https://halo.fandom.com/wiki/Sesa_%27Refumee%27s_separatist_faction?oldid=1807426"
Community content is available under CC-BY-SA unless otherwise noted.