Shatter, also known as War Games Map_Set/: 593-6,[1] is a multiplayer map in Halo 4. Shatter is themed around natural crystalline surfaces and the huge UNSC factories mining them. For some close-quarters face-time, escape the open landscape and duck into a mining facility, or slip through a doorway and hunt unsuspecting Spartans. Shatter enables multiplayer mayhem for up to 16 players in Infinity Slayer and up to 12 players in other modes, such as Capture the Flag, King of the Hill, Dominion and Extraction. Shatter was released as a part of the Crimson map pack on December 10, 2012.[2]

The map is symmetrical. One set of structures is red and the other is blue. In the middle of the entire map, there is a bridge that goes over the main road. There are stairs that lead up to the bridge. This is flipped for either side. There is also a platform adjacent from the stairs on the opposite side of the bridge that can let you jump down to the main road or the bridge. On either side of the bridge towards the edges of the plateau, are little out buildings that are colored according to the side they are on. From the left of these buildings (facing the bridge) are split paths that lead to the opposite spawn. These are usually through rocky terrain and one being elevated over the other path. From the right, you can reach and see your spawn. In each spawn, there is a teleporter that allows you to jump to the side's appropriate out building.

These are the placements of either objective drops or random drops. 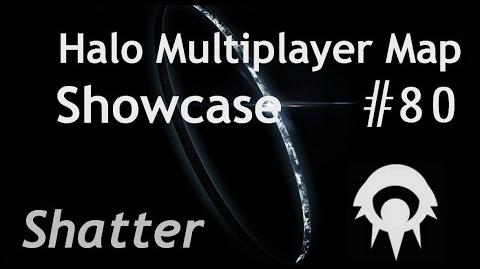 Blue Base. Similar to Red's, only different lighting.

Blue Side of the central structure. Notice the green lighting.

Red side of central structure. Notice the yellowish lighting.