Shutdown is the sixth campaign level of Halo 4. It was first hinted with the release of the achievements, pre-release.[1] For the first time in any Halo game (Apart from playing certain maps in Halo: Custom Edition where Pelicans are pilotable) you can pilot a D79H-TC Pelican, specifically the G79H-TC/MA Pelican gunship variant, as part of the Campaign or Multiplayer. In Halo: Reach this was only achieved with the use of an easter egg in Campaign.

The level starts with Master Chief and Cortana in a room on the UNSC Infinity. Lasky comes down and tells the Chief that he has a fully prepped Pelican gunship in the hangar. Master Chief gets in and leaves the ship through a launch tunnel. John and Cortana head to a tower in an attempt to take down the Ur-Didact's shields. They meet much resistance and are stopped twice before taking out the first part of the shield. They return to the Pelican and move to destroy three antennas regulating signals to the Didact. They destroy all three and find that the Didact knows of their plan. They head to a final tower to forcefully block the Didact's escape. Upon defeating heavy Covenant resistance, they reach the control room. Master Chief plugs Cortana in and she takes control of several pillars. However, a rampancy outburst makes her lose control. Several Liches are seen heading towards the Didact's ship as he prepares to leave. Master Chief jumps on one as the fleet exits Requiem and enters slipspace, heading towards the Ivanoff Research Station near Installation 03.

Screen fades to Cortana looking at the "sun."

Cortana turns around to see Chief loading his weapon.

Lasky nods his head toward the Pelican.

Lasky leaves the room and Cortana looks to Master Chief.

Chief retrieves Cortana from the holo-tube and inserts her into his helmet. Screen fades to black.

Edges of the HUD start to turn into blue static.

The Pelican's landing pad lowers down to a launch chamber.

The Pelican launches and flies straight out of the chamber. Behind it, the Infinity gets further and further away as it leaves. The Didact's Cryptum is seen in the center of a large network of floating Forerunner structures, patrolled by CRS-class light cruisers.

The Pelican lands at the first facility and Chief enters.

The Chief proceeds to activate the switch.

The Chief gets onto the gondola and it starts moving toward the carrier wave generator. On its way it is engaged by Kig-Yar Snipers.

The Chief fights through Covenant forces, eventually reaching the switch.

Promethean Knights suddenly teleport into the area. John fights them off.

A Binary Rifle-wielding Knight Lancer on the second structure fires at the Chief.

The gondola grinds to a halt.

Several Knights, supported by Watchers and Crawlers, block the way ahead. The Chief disposes of them, freeing the gondola.

A Knight Commander phases in to stop John, wielding an Incineration Cannon, but fails. The Chief enters the energy field.

The beam vanishes, depleting the Chief's shields. Half a dozen Watchers phase in, attacking him.

The Didact's voice oddly echoes, as if he is speaking directly into John's mind.

The Watchers are quickly wiped out, allowing the Chief to reactivate the gondola.

The Chief exits the spire and boards his Pelican, heading for the second tower.

After downing the patrolling Phantoms, the Chief enters the second spire.

After a short battle with a Watcher and Crawlers, the Chief enters the main chamber.

A NAV point appears on the Chief's HUD. He proceeds to activate the switch.

The walls reassemble themselves, forming bridges to the attennuators. More Knights phase in to protect the orbs.

After killing the Knight, the Chief destroys the first attenuator.

The Chief proceeds to destroy the second attenuator. Waves of Prometheans attempt to stop his intrusion.

The Chief exits the tower after disposing of stragglers, boarding his Pelican once more.

As the Chief approaches Cortana's waypoint, the spire's surface splits into segments, uncovering the entrance.

John enters the third spire's interior. The tunnel leads to a gravity lift, which the Chief proceeds to board.

John charges ahead, eliminating Covenant forces along the way. A Sangheili Warrior blocks his path, but is quickly dealt with. To his left is a platform occupied by Kig-Yar; here lies the fifth Terminal.

Two Mgalekgolo descend down the gravity lift, forcing the Chief to confront them, either by killing them himself, or tricking them into falling off the edge of the platform. John rides up another gravity lift afterwards, arriving at a massive chamber patrolled by Covenant infantry and air units. After wiping out hostile forces with his own Banshee, the Chief enters a doorway on the far side of the chamber and into the control room. Outside its window, the Cryptum hovers ominously.

John plugs her into the terminal. Cortana's avatar appears, distorted and flickering.

The spires move to surround the Cryptum, physically blocking it from launching.

The towers begins to fall apart.

Cortana suddenly thrashes in agony as the spires plummet downwards, crushing a nearby Lich in the process. Several more fly towards the Cryptum.

Cortana's avatar fades back into a sphere, flickering between blue and red. John plugs her back into his helmet.

The control room's floor retracts downward, allowing the Chief outside.

John runs off the edge of the platform, aiming for the Liches below.

John spreads out his arms, then tucks himself streamlined to fall as fast as he can. He then spins himself upright and uses his thrusters to slow and land on top of the Lich. He crashes hard into the dropship and slides off the hull; unsheathing his combat knife in the nick of time, he stabs into the plating to stop his descent. With some effort, John climbs back on the Lich.

John activates his thrusters and leaps up, taking cover behind one of the Lich's fins. The flagship and its Lich escorts raise their shields as they approach the rupture. After the vessels have crossed the event horizon, the portal dissolves. Cut to black. Level ends. 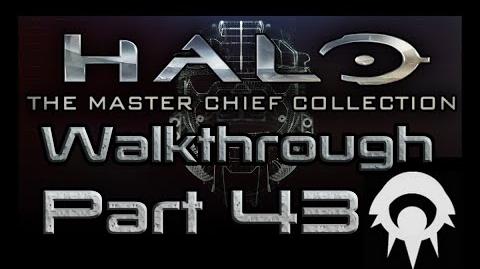