Sidewinder is a horseshoe multiplayer map in Halo: Combat Evolved.

The main features of this map are the ice patches on the front of the horseshoe in between the bases that can cause any ground vehicle without treads or hover abilities to slide, making it hard to control the vehicle, but makes a fun way to splatter enemies. On the outer edge of the map, there are two large cliffs, that are connected to each base with teleporters. These areas are popular sniping spots, as they provide a large view and a quick route to an easily defendable area. On the inner edge, there is a network of tunnels which lead to the opposing bases. Four power-ups can be found in the lower section of the tunnel. A number of weapons can be used on this map, but available weapons are dictated by the gametype. The weapons can be found in the bases, near the teleporters and in the tunnel system.

Suicides can also occur by falling through the holes on the roof of the bases, which can be difficult to see while on a Ghost.

On the Xbox version it is possible to re-enter the level after vacating it, but in the PC edition, due to the addition of the banshee, an invisible wall is added, so it's impossible to exit.

Outside the level grenades will simply disappear although plasma grenades will leave a small blue flame but will fail to detonate. 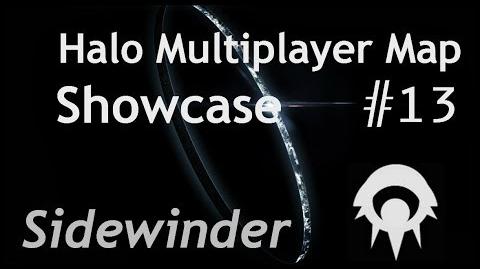 Retrieved from "https://halo.fandom.com/wiki/Sidewinder?oldid=1798270"
Community content is available under CC-BY-SA unless otherwise noted.