Were you looking for John-117, the protagonist of the Halo trilogy?

The rescue of John-117 and the Battle of Earth

This level takes place in a lush African jungle that lies on the southern slopes of Shira peak of Mount Kilimanjaro, as confirmed from the hexadecimal code of the Halo 3 Beta and physically confirmed in the Halo 3 E3 2007 Trailer and the short video subsequent Bungie Podcasts (Mawenzi peak can be seen slightly obscured to the right of Uhuru peak, both of which are part of the Kilimanjaro mountain.) The jungle is home to a Covenant Loyalist encampment, and hosts lush verdant forestry, rivers, rocky landscapes, waterfalls, and tunnels. It has been compared to "Off the Rock, Through the Bush, Nothing but Jackal" of Halo 2's Delta Halo, although it isn't the same place, because Sierra 117 is on Earth and Delta Halo takes place on Installation 05.

After stowing aboard The Prophet's ship in Halo 2, Halo 3 begins with Master Chief escaping from the main ship, and crash landing in the Tanzanian jungle. Having been found by Sergeant Johnson, Sergeant Stacker, some Marines, and the Arbiter Thel 'Vadam, John-117 is escorted through the jungle, not knowing there is trouble ahead. Johnson has with him two squads of Marines, but, after spotting a Covenant Phantom overhead, he decides to split them in order to attempt to reach an evacuation point at a nearby river. The Master Chief, Thel 'Vadam and one squad head one way, following a stream leading to the river, while Johnson and the other UNSC forces scale a waterfall, and head another way. Bravo squad, apparently left behind by Johnson's team to guard the Landing Zone, where Pelicans were to extract the troops, breaks radio silence, and is attacked by a pack of Brutes, lead by a Brute Chieftain.

The Chief encounters the previously patrolling Phantoms, which drop off Brutes and Grunts. After the battle, they receive notice from Johnson that they cannot get into contact with another marine team, Bravo. Almost immediately after, the group comes across a stricken marine held captive by a Brute on a log above them. The Brute beats the marine, inquiring about an "Ark." After killing the inquisitive Brute, they are told that the rest of Bravo is dead, apparently pinned down by a Phantom and slaughtered by a Brute chieftain. The Bravo team survivor, Gunnery Sergeant Reynolds, then joins the squad escorting the Master Chief.

By the time the Master Chief and Thel 'Vadam make it to the river for evacuation, the Pelicans at the evacuation point are already under attack by Covenant infantry and multiple Banshees. Johnson is seen using the machine gun turret at the back of one of the Pelicans, and with combined fire the Covenant are momentarily pushed back. This does not offset the heavy damage taken and they make a fiery exit further down river as more Brute and Grunt reinforcements show up to kill Master Chief's squad. After pushing through the Covenant forces, the Chief and Thel 'Vadam are told over the COM that Johnson's Pelican has crash landed and shortly afterward come across him and his squad fleeing from the crash site, pursued by Brutes and Grunts. The Chieftain pulls his own Phantom out of the fight to regroup.

They desperately try to catch up with Johnson, killing many Grunts, Brutes, and Jackals. After coming across the crashed Pelican, they find Sniper Rifles and Battle Rifles and they discover over the Pelican's radio that there is no sign of the second Pelican. It is assumed to have crashed and sunk into the lake. Master Chief, Thel 'Vadam and the surviving Marines then find themselves in a thick jungle and have to fight past Jackals hiding in the trees and on the ground, with no sign of Johnson or his squad of marines.

They then reach a large dam where they see Johnson being taunted and kicked into a small building and held captive by a Brute chieftain. It is implied that this is the same Chieftain that killed Bravo's men and pursued Johnson from his crash site. The area is also littered with Grunts and Jackals as well as half a dozen Brutes. With slow progress, the two heroes manage to fight their way through and around the dam and eventually take down the Brute Chieftain. They then rescue Johnson and the three surviving marines from his squad. (Note: the Marines will not appear if you still have Marines from before)

Johnson calls in Pelican Kilo 023 piloted by Hocus to come and pick them up, but they are first engaged by two Phantoms which drop off hordes of Grunts and a few Brute Captains wielding Brute Shots and Spikers. Whilst the group engages the ground forces, the Pelican arrives and takes down the two Phantoms with missiles. Hocus then lands and evacuates the survivors and Johnson is seen patting the Chief on the shoulder in thanks before the Pelican flies off.

Brutes on the prowl.

If the Chief waits and hangs around.

A Brute howls off in the distance.

There is the ominous whisper of gravitational drives as a Phantom flies overhead above the trees.

Johnson and 2nd Squad climb up the cliff by the water fall.

Johnson and 2nd Squad cross the river above the waterfall and run out of sight. The Master Chief and Thel 'Vadam lead 1st Squad. Thel 'Vadam leads the Chief up on some rocks around a pile of fallen logs, while 1st Squad waits to go straight over, pointing out a Brute Captain Major.

1st Squad engages the Brute and his Grunt subordinates along with the Master Chief and Thel 'Vadam. They regroup.

A couple of Phantoms draw near, each deploying a squad of Grunts and Brutes, blocking the advance of the Master Chief and his allies. Eventually, they are cleared, and the Marines form up at a winking flare at an underground cave.

After advancing through the caves, a massive forested expanse is found: the "Grunt Camp."[1] Sleeping Grunts litter the first half while a few Brutes, Jackals, and other Grunts patrol the far hills.

When you are spotted by Covenant:

After the team clears the Covenant camp:

Beyond the encampment, a Brute Captain is torturing a Sergeant Reynolds on a log. It is possible and optional to save the Marine by killing or distracting the Brute before he kills him.

1st Squad continues on until they reach another cave.

The minor UNSC force continues forward, towards further caves and pushing towards the river, where Johnson has established an extraction point for 2nd Squad. They head down a steep slope for some underground caves that lead to the river.

2nd Squad leaves the caves; the river is around the next bend. Three Marine corpses are scattered on the ground, with BR55 Heavy Barrel Service Rifle ammunition and Fragmentation Grenades.

Beyond the steep slope is a river substation[2] next to a raging river. A pair of Pelican dropships hover above the river as gunners in their troop bays fire upon a cluster of Covenant troops that have tunneled themselves in the substation. The Pelicans are the extraction force to evacuate the Master Chief and his team.

As the Master Chief and his allies take out the Covenant forces that are closer to the Pelicans, two Banshees streak in along the river.

The Banshees launch a high-speed strafing run against the Pelicans, and explosions cascade over them as the Pelicans rock. Echo 51's wingman collides with Echo 51.

Both Pelicans streak away around the river bend. Echo 51, in a futile attempt to gain altitude, skims the top of a cliff and crashes out of sight. The Wingman attempts to do the same, but, having suffered more damage than Echo 51, immediately plunges into the river beyond the dam, most likely drowning all of the Pelican's occupants. While the Master Chief, Thel 'Vadam, and the Marines fight through to secure the substation despite two waves of Brute-led Covenant Loyalist reinforcements, Johnson and his team exit the wreck of Echo 51 but are beset by a Brute ambush.[3]

On Easy or Normal:

After the Chief and 'Vadam pass through the short Jackal-laden "Sniper Alley,"[4] they see a bridge. Three Marines are crossing it, under heavy fire, retreating from the wreckage of Echo 51. They hear Johnson's voice over the COM unit as a Brute leads a charge against the fleeing Marines.

Johnson and some of the Marines frag the Brute and his fellow soldiers on the bridge, and run off into a cave.

The Chief and 'Vadam encounter many hostiles, including a Brute Chieftain on the side of a Phantom, who flies off when either his gunner or many of his troops are eliminated. The Chief and 'Vadam secure the area, and discover Echo 51's crash site by the riverside. The Pelican had flipped over after hitting the cliff, scattering ammunition and weapon racks, including a SRS99D-S2 AM Sniper Rifle and other munitions, around the crash site. The crashed dropship, lying on an outcropping along the valley wall, is surrounded by Assault Rifles, Battle Rifles, and Frag Grenades, and the Pelican's radio is still operational.

If the Chief or 'Vadam waits by Echo 51's radio:

If any of Echo 51's Marines are still alive

If any Marines accompany the Chief and 'Vadam.

The Master Chief leads 'Vadam (and any accompanying Marines) through the caves towards where Johnson is being held.

Rescue at the dam.

At the end the Master Chief and 'Vadam reach a low cliff, viewing a Loyalist-held dam. 'Vadam spots the Chieftain beating Johnson soundly on the far left in front of a small building.

The Chieftain roars at Johnson. Johnson punches the Chieftain in the stomach with no effect.

The Chieftain growls loudly and kicks Johnson back inside the "prison."

The Chief and 'Vadam battle their way across the dam, taking down the Chieftain. They finally reach Johnson, who's been tied up and imprisoned behind a plasma shield.

If no Marines came with the Chief, the other three Marines in the prison will still be alive and awaiting rescue.

The Master Chief releases the plasma shield that was imprisoning Johnson and his fellow Marines.

Sergeant Johnson and the Marines grab Covenant weaponry from nearby crates.

Two Phantoms arrive, carrying reinforcements. The Chief, 'Vadam, Johnson and any accompanying Marines hold position in the building for shelter until Kilo 23 arrives.

The Pelican Drop Ship Kilo 23 rounds the river bend, directly in front of the two hovering Phantoms. Hocus, Kilo 23's pilot, lets loose a missile barrage, etching the air with vapor contrails as the first Phantom explodes in a brilliant coruscation of light.

If any ground forces remain, Kilo 23 will take them out. Kilo 23 fires two missile barrages at the second Phantom, and sends it plunging into the river.

Hocus lowers the Pelican to the dam for pickup. Johnson, the Master Chief, 'Vadam and any remaining Marines board Kilo 23.

If the Chief doesn't board the Pelican:

If the Chief still stalls:

If the Chief still doesn't board:

Kilo 23 takes off. Johnson gives the Chief a pat on the shoulder appreciatively and goes into the cockpit. The back hatch closes and Kilo 23 flies over the first dam, en route to Crow's Nest. The view cuts to an area in the jungle. Sentries on watch in the jungle spot Kilo 23 on approach.

The two Marine Sentries bump their fists and smile.

Kilo 23 proceeds to descend into a hole in the ground. 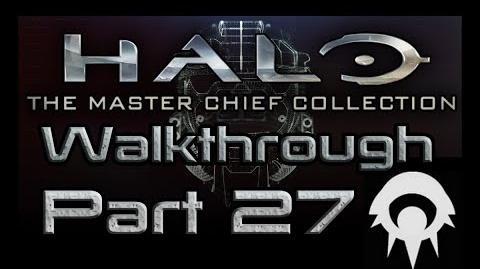 Concept art of the Dam in the level.
Add a photo to this gallery

Grunts in the jungle.

A Brute preparing to attack John-117.

The calm before the storm.

Two Avery J. Johnsons, which is the result of a glitch.

A Brute Chieftain riding on a Phantom.

Birds eye view of Sierra 117.
Add a photo to this gallery

Retrieved from "https://halo.fandom.com/wiki/Sierra_117?oldid=1817175"
Community content is available under CC-BY-SA unless otherwise noted.