Halo Alpha
Register
Don't have an account?
Sign In
Advertisement
in: Halo: The Flood, Halo: The Cole Protocol, Human Aircraft

Small arms for ground combat are located within the vehicle.

The Single Occupant Exoatmospheric Insertion Vehicle, informally referred to as the Human Entry Vehicle and drop pod and also known as the Egg, is a small pod used by the United Nations Space Command to deploy an individual and his equipment from high orbit to the surface.[2][3]

The SOEIV is an angular pod, approximately nine feet in length, a span of 2.5 m and a height of 5.4 m. Within it is a crash seat, communications gear, numerous equipment racks, and a rudimentary control system and a single entry and escape hatch. In spite of the size of the pod, there is not much room to move around, as the space given over to equipment storage lines the interior attached to the frame.[2]

In use for nearly three decades,[4] SOEIVs allow for the rapid deployment of ground assault troops near or right onto an objective. Their smaller profiles make them more difficult to be destroyed by defensive fire than conventional dropships or Armed Assault Boats, which preceded the SOEIV in service.[3] Each pod bears the name of the soldier inside; amongst other things this identification could be used to identify the unfortunate occupant of a destroyed pod.[citation needed]

UNSC Insertion Protocols call for the command unit of an SOEIV-facilitated assault to land first to minimize the period of disorder that might occur as pods land and troopers deploy. The reasons for this rule include the strongly held belief that officers should lead rather than follow, should be willing to do anything their troops are asked to do, and should expose themselves to the same level of danger as their subordinates. The commander’s pod is equipped with a great deal of equipment that the regular SOEIVs do not possess, including high-powered imaging gear, tactical sensors, and a fourth generation, Class C Military "dumb" AI. SOEIV usage is popularly associated with the soldiers of the elite Orbital Drop Shock Trooper divisions, although UNSC Special Forces operators and Spartan-II supersoldiers are known to use these as one of their primary infiltration methods as well.[5][6]

The trooper enters the SOEIV and straps in facing the hatch. The hardened and shielded communications gear, which is built directly into the hatch, feeds the soldier information relevant to the current operation as well as providing a link between all members of the unit during the drop. While within the SOEIV a soldier's helmet integrated comm units are redundant and are normally only used if the pod's comm gear malfunctions.

A 30-second countdown begins on the commander’s mark, and the SOEIVs fire quickly down through the ship’s belly. The SOEIV is balanced to stabilize in a feet-down position. The pod has limited maneuvering capability, used primarily to coordinate landings, but may be used to avoid defensive anti-aircraft fire. However, if defensive anti-aircraft is present it is almost a mathematical certainty that some pods will be lost. A SOEIV is made of Titanium-A, Lead Foil, and a ceramic skin. The skin burns away during atmospheric reentry, protecting the rest of the pod and its occupant from the worst of the considerable heat. The Lead Foil is there to keep the armor from ripping away and to replace the ceramic skin once it burns away. However, as the ceramic skin burns away the air inside the pod becomes unbelievably hot,[3] and if the armored skin that covers a pod is damaged before or during its entry into atmosphere it has a tendency to fail spectacularly. This is the reason for the SOEIV's small size — each pod loss only results in one death rather than the deaths of the entire unit.

After the SOEIV has penetrated the atmosphere, at an altitude of 900 m,[4] the upper exterior panels separate acting as a drag-type chute, slowing its descent some and helping to keep the pod on course by keeping it upright. At about 50 meters[citation needed], the pod’s computer controlled braking rockets engage, slowing the pod further; this allows for a safe (though somewhat abrupt) landing. Braking rockets on SOEIVs do fail on rare occasions, leaving the pod’s occupant to die on impact. It’s the death that every ODST fears, and is referred to in hushed tones as "digging your own grave."[citation needed]

SOEIVs are capable of smashing through almost any surface during re-entry, including buildings.[4] However, a reinforced roof should be able to withstand the impact, allowing an ODST to begin his mission with a distinct vertical advantage.[7]

Besides the distinct speed and shock value advantage that the SOEIV has, it also has another advantage over conventional systems. Because the SOEIV is dropped from above, this allows it to enter much tighter spaces like an urban area where a Pelican might have trouble maneuvering. This can also be useful on hazardous terrain where the long length of a Pelican makes landing a challenge.

Along with the quick deployment speed of a SOEIV comes the responsibility of being the first ones in. This means the first wave of ODSTs' primary objective is usually to secure a landing zone for Pelican and Albatross dropships in order to get a more concentrated force on the ground and to bring in heavier equipment like Warthogs and additional heavy weapons.

Upon landing, each ODST is responsible for stripping their pod of its store of extra weapons, ammo, and other supplies, which are then hauled to the unit’s temporary base camp. ODSTs are used to operating without resupply for extended periods, and they are well known to be at their best when under difficult conditions.

Each SOEIV contains a variable number of weapons, ammunition, rations, a radio, and can be used as a shelter if need be.[4] Dedicated SOEIV variants exist to deliver supply caches to ground forces, ranging from weapons and ammunition, to small light vehicles such as an M274 Mongoose ULATV, and even a Shiva-class Nuclear Missile.[8]

The SOEIV also stores an extra tank of rocket fuel, which is not used up in the landing, but is rather used for moving to a different location if the vehicle has somehow been knocked off target or is in a currently undesirable position. The pod, however, must be stood up in the position designed to land in.

An improvement on the SOEIV was the Long Range Stealth Orbital Insertion Pod which came into service around 2545. The long range pods featured a Stealth Ablative Coating and could be launched from Slipspace. This pod was used to transport SPARTAN-III Beta Company to the surface of Pegasi Delta during Operation TORPEDO.

External view of SOEIV launching tubes at the bottom of the UNSC Forward Unto Dawn.

Concept art of a variety of SOEIV variants.

View from inside a SOEIV, with various screens and monitors.

SOEIVs inside a ship's drop bay.

A scaled drawing of the SOEIV.

A crashed SOEIV on Installation 00. 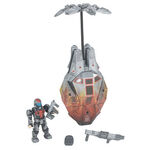 The Mega Bloks set of the SOEIV 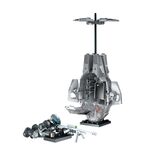 ODST SOEIVs dropping into the surface of X50.

Cinematic render of the interior look for the SOEIV's door in Halo 2: Anniversary.