The Skull is a bony structure in the head of many creatures that supports the structures of the face and protects the brain from injury.

Skulls can be found in every Halo game, with the exception of Halo: Combat Evolved.

Skulls featured in Halo 2 are more like Easter Eggs than actual features—although they did affect gameplay dynamically, they are not entirely well-known to every player, and not essential to a campaign's gameplay experience. They are also very well hidden. Once a skull is found in Halo 2, it can be wielded as a melee weapon, but does the same amount of damage a normal melee with a standard weapon would do (excluding the fatality of a Sword lunge). There is one skull in every level other than the level "Outskirts," which has two. Unlike all the other games, skulls cannot be accessed by a menu, and must be found and picked up in the campaign each time they are wanted. The skulls' effects are activated upon picking them up and continue to be active across all games of campaign for all users until the console is restarted.

Skulls in Halo 3 are hidden as they are in Halo 2, but are separated into two different types (silver and gold) and are incorporated into gameplay as score modifiers. Gold skulls represent skulls that amplify and modify scores in campaign levels (and you gain Achievements when picking them up), and silver skulls represent those that change the game in humorous ways, except for the Blind Skull which changes the dynamics of the player's HUD. Both silver and gold skulls augment the player's score throughout the campaign. Once a skull is found, it can be wielded as a melee weapon just as it could in Halo 2. Skulls are hidden throughout the campaign, but can only be found on Normal, Heroic, and Legendary difficulties. Skulls found are no longer activated upon picking them up. Instead, once a skull is found, it can be activated in a menu in the campaign game lobby. Skulls still must be found to be available in the lobby. Finding all skulls unlocks the Hayabusa armor permutation.

Skulls are also featured in Halo 3: ODST, in both campaign and multiplayer (Firefight remains the sole multiplayer function for ODST), and are separated into gold and silver as they were in Halo 3. The skulls in ODST remain the same in concept, name, and function as they were in Halo 3 (with the exception of the 'Fog' skull, which has been removed, as ODSTs do not possess radar), but ODST's skulls are not hidden in campaign levels as they were in the previous installments. Instead, all skulls are unlocked by default. Skulls can be activated in a menu in the game lobby, similar to Halo 3, and also feature the separation of skulls into both gold and silver types that function almost the same as they did in Halo 3. Gold skulls modify score, and silver skulls only modify the game itself in humorous ways—both of which retain the names, design, and properties as they did in Halo 3.

In Halo Wars skulls are more numerous than they are in any other Halo game, and retain similar properties of the previous games, while adding new functions and types as well. Specifically skulls are not separated into gold and silver, and are activated by completing certain specific optional objectives in certain missions. Once the objectives are completed, the skull will be unlocked, and must be found in a specific location before the mission ends, giving them a similarity to their location in other Halo games in that they must be "found" in a certain specific area.

Like ODST before it, Halo: Reach does not require players to locate the skulls before they can activate them. This was likely done to accommodate the addition of the daily and weekly challenges, as some of them require skulls to be activated to accomplish the assignments. Reach's skulls are almost completely identical to their Halo 3 and ODST counterparts, the only noticeable exceptions being the 'Cloud' skull replacing the 'Fog' skull (the effects, however, are identical), and the addition of up to three custom skulls in Firefight.

Returning to their Halo 3 roots, the skulls in Halo: Combat Evolved Anniversary must also be hunted down within the campaign levels to gain access to them. Unlike previous Halo titles, skulls in Anniversary cannot be picked up and used as Melee weapons. Like Terminals, skulls are not visible in Classic mode.

In the Oddball multiplayer gametype, the skull is an item that must be located and in possession for the longest time possible. While carrying the skull, it temporary replaces the previous weapon the player was using. The skull cannot be holstered, but can be used as a very efficient melee weapon. Depending on the rules of the variant, the skull can deal much more damage than a normal melee would.

In the default settings for Oddball in Halo 3, a successful skull melee can cause an instant kill. Oddball is featured in Halo: Combat Evolved, Halo 2, and Halo 3 multiplayer. The skulls are not featured in multiplayer in Halo Wars.

In Halo 3: ODST's Firefight, skulls are "turned on" as the game progresses chronologically in terms of waves and rounds. Every round a different skull activates, ensuring a certain level of difficulty (and score modification) depending on the function of the skull itself. Skulls are separated into both gold and silver in Firefight as well, and the silver skulls can be turned on via a special menu before the game starts.

Skulls are hidden within many Halo 3: Mythic maps, usually only obtainable through the Forge modes flying capabilities, though serving no other purpose than achievements and optional melee weapons.

The skull also appears in Halo: Reach's multiplayer Headhunter gametype as multiple flaming skulls. In Headhunter, players fight for flaming skulls which are dropped when an opposing player is killed, and then return the collected skulls to their designated (but mobile) deposit zone. Players will be able to collect the exact numerical bounty which the previous player has collected; i.e. a player who has seven skulls will drop all seven skulls when killed. An interactive counter will be visible in a player's HUD depicting the exact amount of skulls each opponent is carrying.[1] Also, in Halo: Reach's far more dynamic implementation of Firefight, players will be able to completely customize and create their own Skulls (integrated parameters set for certain conditions, such as damage, player speed, and AI enemy strength) to be incorporated in custom matches.[2]

The Skull itself is from Halo: Combat Evolved's early development: when the player goes to rescue Captain Jacob Keyes in the level Keyes and discovers that he has been consumed by the Flood, John-117 was to burn through the Proto-Gravemind biomass and pull out Keyes' skull to get his neural implants. However, this was cut due to the Flamethrower being removed, and possibly the burnt skull being too disconcerting to present in the game as well.

The Elite skull featured for Legendary difficulty in the Halo Trilogy.

A silver skull from Halo 3.

A gold skull from Halo 3. 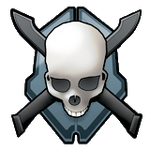 A skull featured on the Legendary Alone completion achievement in Halo: Reach.

The skull appears in the haunted pilot helmet in Halo: Reach.

The Catch skull atop of a silo in the level "The Storm."

The Mythic skull in the level "Halo."

John-117 with the IWHBYD skull.