The rooftop terrain on this new space tether construction site is an ideal training environment for close-quarters infantry combat. This map, perched high above the sights of reconstruction in Cascade’s capital city, is small and symmetrical, perfect for Regicide with a mixture of high and low spaces and plenty of cover. Don’t think cover means you’re safe, however – this map holds explosive fuel cells that can and will wreak havoc in Skyline’s confined spaces, not to mention the long, long drop if you misstep.[3]

Skyline is a symmetrical map. There is an angled platform that goes towards the vista of Mindoro that splits off into the center of the map and towards the other gate. There are stairs that lead onto a lower platform. Towards each end where the spawns are, is a staircase that leads up to each gate/spawn. On the right of each spawn is a path that leads to another staircase that can go down to the lower level. The rest of the upper path heads to the opposite gate or to the center platform. The upper paths are both connected to another pathways that go parallel to the center platform. This center platform has a pillar right in the middle of it. The platform can be reached to by man cannons on either side. Right under the main platform is a z-shaped hallway that connects either half of the lower level.

These are the weapons that individually spawn through initial drops or specific weapons in randomly timed drops. 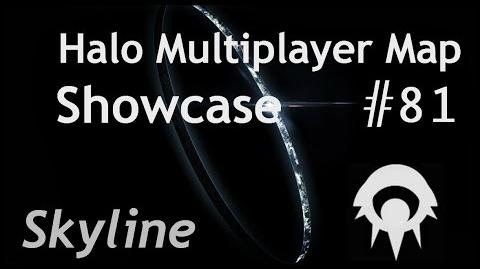 Skyline 2 (a Hornet is seen patrolling the vicinity).