Covenant structures in icy terrain built over a Forerunner installation.

Snowbound is a medium-sized multiplayer map in Halo 3. From Bungie Q&A on a Weekly Update, they hinted that it may take place on a former Forerunner planet near Earth, though it is currently occupied and being excavated by the Covenant.

Snowbound is a medium-sized, semi-symmetrical map set in a snowy Forerunner area with two large Covenant bases at either end of the map. The bases, known as high base and low base, are connected by an underground tunnel network. Much fighting takes place in or around the shield doors found inside the bases.[1]

Rocky outcroppings are located along the southern and western edges of the map (Rock Side); Covenant-built Automated Turrets prevent players from exiting the map via its otherwise-unblocked northern and eastern edges (Tundra Side). When players venture too close to the map's boundaries, an alarm sounds, warning them to return to the bases before the turrets open fire.[2]

In Bungie's 8/22/08 Weekly Update [1], Bungie announced the release of Boundless, a version of Snowbound that lacks shield doors (except the four which can be accessed on top middle) and has a slightly different weapon layout.

Low Base is one of the two Covenant bases on the map. This base, which is located on the eastern side of the map, appears to be fully functional, though it has apparently been abandoned. It is often referred to by players as "BR Spawn" because of the two Battle Rifles that spawn on its outer rear walls. Inside the base, there is a Spartan Laser, two Spikers, and a Bubble Shield. Outside the base, a Carbine, a Spiker, and a Mauler spawn to the south; an Active Camo spawns towards the north. On top of the base, there is a Needler and a pair of Plasma Grenades.

Directly adjacent to Low Base, High Base offers a different set of weapons. High Base's lights flicker and buzz, implying that it has become damaged. The large sphere in the center of the base appears broken, and icicles hang from the base's exterior, implying that its heating system has stopped working. Whether this damage is the result of the base's abandonment or something else is unknown.

High Base is commonly referred to as "Sniper Spawn" or "Carbine Base" due to the Carbine and Beam Rifle it contains. Behind the base, players can find a Battle Rifle or a Plasma Rifle around the rocky terrain. A Mauler lies to the north of the base, and an Overshield to the south. Inside, there are two Plasma Rifles, a Beam Rifle, and a Power Drain. On top of the base, there is a Plasma Pistol and a pair of Plasma Grenades.

The outdoor portion of the map is home to many predominant features, and is also a sniper's paradise.

Located between both bases, to the south, is the Underpass (or "Ghost Spawn"), a tunnel where a single Ghost (or Mongoose) spawns. In the center of the map, the Ice Cave Tunnel provides access to the Ice Cave, which in turn provides access to the interiors of both bases. A common tactic is to blindly toss grenades into the map's lower levels from this area, turning the underground corridors and tight spaces into grenade-powered deathtraps. Further to the north, on the opposite side end the Underpass, lies the Ice Cave's main entrance, with its distinctive overhang and large shield door.

Predominantly known as the "Shotgun Spawn" in Lone Wolves or the "Sniper Spawn" in Team Slayer, heavy fighting occurs in this cold and icy cave. This area sees frequent carnage due to its high traffic, tight quarters, and position between the High and Low Bases. To the immediate south is a narrow, elevated opening with no shield (Ice Cave Tunnel). On the western side of the cave's interior is a tunnel to the High Base; opposite that is a tunnel to the Low Base. Directly north is the Main Entrance, which is protected by a larger shield door.

Entering the Ice Cave from the Bases or the Ice Cave Tunnel is extremely risky. The main entrance is very defensible, as it affords the player with a full view of the cave's three most-used entrances and its shield door provides protection. Above the Ice Cave's main entrance spawns a Brute Shot (top), as well as a Spiker to the west and a Mauler to the east. An often seen tactic on this map is to hide on the other side of a shield door with the Shotgun or Mauler and kill players as they pass through.

Boundless is a Forge-altered version of Snowbound added into matchmaking on September 23, 2008. It has a new weapon layout and fewer shield doors in order to weaken Shotgun camping. In both High and Low bases, the two entrances from the top middle portion of the map still have shield doors. The others have been mainly removed. To have the modified map Boundless in Custom Games and Forge, one has to play on this map first, and then save into his/her Custom Content Library.

The layout of Snowbound as it appeared in Halo 3 Beta. 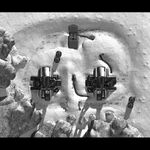 A birds-eye view of Snowbound.

The underground quarters of the ice cave.

A Monitor under Snowbound.

An overview of Snowbound.

Snowbound at the foot of the mountain when viewed from a distance. 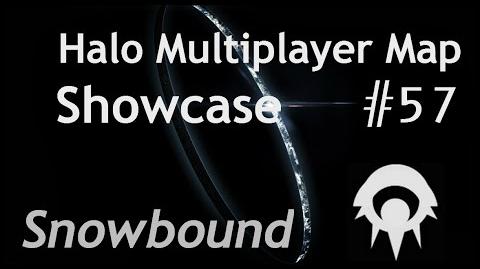