The Sol system, otherwise referred to by UNSC personnel and Humans alike as the Solar System, is the home star system for Humans. The system's G-class star is named Sol, hence the system's name.

Prior to the Interplanetary War, many different military actions were taken by the United Nations on the communist Koslovics and the fascist Friedens. The Jovian Moons campaign took place at the Jovian Moons, and the Rainforest Wars in Earth's jungles began to take place.[2] Following these two events, Luna was the site of the Battle of Delambre,[3] and Mars saw military action in the Argyre Planitia Campaign. After this, full scale war took hold across the Sol system.[2]

In 2362, the first interstellar colony ship, the Odyssey,[2] left the Sol system for the Epsilon Eridani system.[4]

On October 20, 2552, Io Station detected 15 Covenant ships, heading straight for Earth. Soon after, the Fleet of Sacred Consecration arrived and ignited the Battle of Earth.[5]

A size comparison between Alpha Halo, Threshold, and planets in the Solar System.

The Fleet of Furious Redemption above Mars. 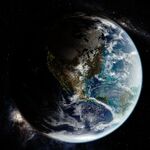 The Covenant around Jupiter.
Add a photo to this gallery

Retrieved from "https://halo.fandom.com/wiki/Sol_system?oldid=1812724"
Community content is available under CC-BY-SA unless otherwise noted.