< Spartan Ops‎ | Season One
View source
watch 02:58
No Man's Sky Update - The Loop
Do you like this video?
Play Sound

Artifact is the second episode in the first season of Spartan Ops. 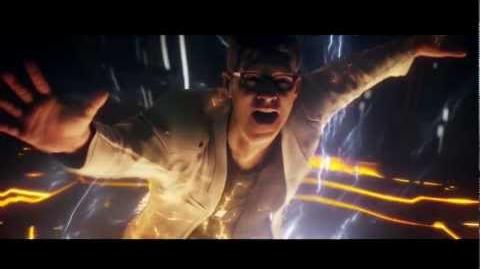 The camera starts looking up at a Promethean Crawler, screaming at Fireteam Majestic. The camera turns around to see Majestic holding out behind cover, shooting at several Crawlers moving up towards them. DeMarco stands up and fires a shot from his battle rifle, taking out a crawler.

Madsen takes a shot with his sniper, taking out another crawler, while Grant ducks back around cover, reloading her DMR.

Madsen takes one more, concentrated shot, taking out the last crawler. He stands up, relaxing his gun.

Suddenly a Promethean knight teleports infront of Madsen's range and takes a shot at him with a scattershot.

Madsen is hit in the chest and falls down. Suddenly four more knights apear.

Hoya jumps up and over the cover with a shotgun, and pumps it ready to fight. He takes out a knight and pumps the shotgun again.

Hoya takes another shot, but doesn't notice a knight leaping onto him. The camera shows us the knight scream at Hoya from his helmets point of view. Fade to dark.

Majestics pelican flys into Infinitys hanger and lands, Palmer is already waiting. She walks around to the entrance of the Pelican, and is surprised to see Majestic team in such a state.

The team exits the pelican, Madsen first, holding his sholder, followed by Grant, then Hoya on a stretcher bed.

Hoya looks up to Palmer.

The bed continues moving, and thorne walks past the commander followed by DeMarco, who stops, looking grumpily at Palmer.

DeMarco continues walking, while Thorne, still in the hanger, watches some scientists move a strange artifact through the bay.

Suddenly, the artifact stops floating, and drops to the ground. powerful rays of energy pulse through it, it sends out a very strong pulse and the scientists attempt to avoid it, but it passes through them and runs throughout the entirety of the Infinity.

camera changes to a shot of Captain Lasky, as he walks into the command center he notices the orange pulse moving around him.

Camera pans outside of the Infinity and the engines lights fizzle, and go out.

Lack of artificial gravity causes Glassman and his work to float up into the air.

Camera pans out to the outside of the Infinity, slowly drifting towards Requiem. Camera then moves into the Infinity's hangar bay, where Pelicans and other objects in the hangar room float around, Palmers loud grav. boots can be heard.

Palmer runs towards the artifact, and gives it a swift kick.

Power returns to the infinity, Glassman falls down, after the gravity has been turned back on. Camera moves to the outside of the Infinity, and all the lights and power to the ship get turned back on. and the Infinity regains it's original course. Lasky and Dr. Glassman move into the hangar bay where the artifact resides.

Dr. Glassman moves towards the artifact, looks at it, studies it, and then he touches it, giving off a pulse along the artifact's surface.

Glassman taps the artifact again, it gives off a  stronger pulse this time, and orange electrical currents run along his hand and then arm.

Dr. Glassman, notices that the orange elctrical current is running along his body, and looks towards Lasky for help. Lasky runs towards him and tries to pull him out.

Palmer pushes Lasky aside, for his own safety, and Glassman gets sucked into the artifact, vanishing before the eyes of both Palmer and Lasky.