< Spartan Ops‎ | Season One
View source
watch 02:58
No Man's Sky Update - The Loop
Do you like this video?
Play Sound

Catherine is the third episode in the first season of Spartan Ops. 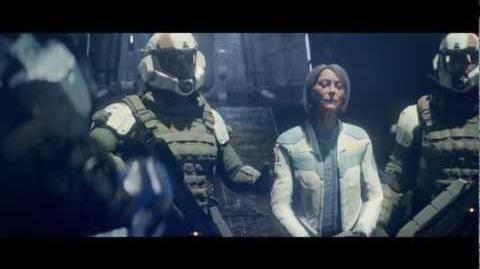 The video starts out with the UNSC Aladdin, coming into the hangar of the Infinity, turning off their active camouflage, and preparing to land.

The camera moves in front of Lasky, Palmer, DeMarco, and Madsen, As the Aladdin moves closer into the hangar. Palmer moves over to Lasky whispering in his ear.

As Lasky says that, the door from the ship opens, revealing five figures, the camera then moves over to Lasky, and then back to the five figures, two marines walk forward out of the group, and the rest follow, it is revealed that the person being escorted is Dr. Halsey. Palmer motions DeMarco and Madsen to make sure Halsey doesn't do anything sketchy. The two marines push Halsey over to Lasky.

Dr. Halsey lifts up her hands revealing her handcuffs.

Lasky motions Madsen to un-cuff her, he then walks over to her and unlocks the handcuffs, Dr. Halsey then looks at Lasky.

The camera then pans over to another hangar, with the artifact located in it, while Lasky and the Spartans accompany Dr. Halsey over to the artifact.

Dr. Halsey moves closer to the artifact to examine it closely, Halsey gets prepared to touch the artifact when Lasky tells her to be careful.

Lasky starts to move out of the hangar, and the Spartans follow close behind. with DeMarco looking at Madsen, and Madsen shakes his head. The camera then moves along with an express elevator, heading towards the Engine Room. The camera then moves inside the elevator, with Lasky, Dr. Halsey, and Palmer sitting down. Palmer stares at Halsey intently. Madsen looks at his Assault Rifle, and DeMarco looks at Dr. Halsey.

Palmer sits up interested in what Dr. Halsey has to say. The camera then pans downward over the Engine Room, with a bunch of computers, Roland's avatar, and the Engine Room's blue, bright core.

Halsey checks the Engine's monitors and examines their status.

Halsey continues examining the Engine monitors, as a pulse of orange Electricity flows throughout the engine room startling everyone and causes the Spartans to hold Halsey at gun-point.

The camera closes in on one of the monitors and shows a transmission, being transmitted from the Infinity, to Requiem, and zooms in on a beeping yellow dot and then fades away. The dot fades away to a Covenant Remnant encampment with elites moving equipment around, and Gek ordering them around. (Note that Gek and the other Elites are speaking in their own language, and that these are just the subtitles)

Jul' walks closer and Gek kneels down to show his respect.

Three Sangheili bring in Henry Glassman, and pushes him to the floor so he kneels before Jul 'Mdama, Jul walks closer to him.

Jul looks at Henry Glassman and has a worried look on his face as he looks at the other Sangheili around him. Screen fades to black