Didact's Hand is the fourth episode in the first season of Spartan Ops. 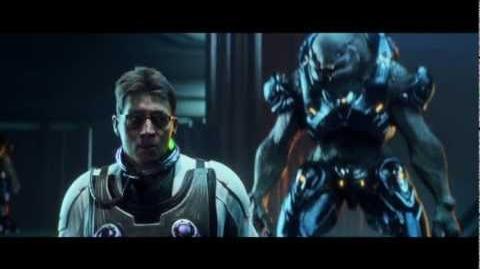 Camera moves to a closer shot of Thorne's and Grant's face.

Grant walks backwards away from Thorne and through a door.

Thorne knocks on a door to reveal Dr. Halsey sitting in her cell. Halsey looks up at Thorne, the camera shifts in front of his face.

The camera shifts behind Thorne with Halsey speaking.

Infinity's power flickers with Halsey and Thorne both looking up at the lights flickering on and off, Thorne looks at Halsey.

Halsey stands up and walks towards Thorne and out of the room, Thorne steps out of her way and motions his hand outwards. they both leave. The camera shifts to Infinity in space and The engines giving off blue electricity.

Screen fades to black. The camera pans around the hangar where the Translocation Artifact is located. Lights and other equipment are in the vicinity of the Artifact. Halsey is working on some equipment while Thorne walks up behind her.

Thorne starts pacing around the room.

Halsey looks up from her computers.

Halsey turns around to face Thorne.

Halsey turns to face her work again. Thorne continues to pace in the opposite direction.

Halsey looks up again and slowly turns to face Thorne.

Her Data Pad starts flickering, the schematics of the Artifact disappear, and Covenant symbols appear on the pad and change to English words. it reads: "\\: Doctor Halsey."

The messages from the unknown sender keep appearing they read: "\\: We have much to discuss \\: You need to know the truth about about a great many things >>" The camera shifts to Infinity's control room with Thomas Lasky, Roland, and Sarah Palmer looking at a holographic video.

Palmer looks at Roland with a stern, serious look.

Thomas Lasky taps on the Holo-tables keyboard, information about Copernicus pops up on a holographic display.

Thomas Lasky looks at the information on the display.

Palmer puts in some commands on a keyboard. The holographic table zooms in on an Elite.

Camera moves closer into the holographic Jul 'Mdama. The camera then shifts to Halsey looking at the Data Pad, new messages have appeared since earlier. They read: "H : I ask again, who are you? \\: That is… difficult \\: What do you know of the Prometheans?" Halsey turns around again to see Thorne pacing back and forth.

​Thorne begins to pace again. Halsey looks at him, still thinking about his response.

​Halsey looks at Thorne as he slowly walks towards her.

Halsey puts the Data Pad behind her back.

Halsey continues to look at the Data Pad.

Halsey puts her hand down and continues her work. Camera shifts to the Librarians shrine with Henry Glassman working on the ground trying to open it. Gek watches over him menacingly. Glassman hits the box he's working on. Note: All Sangheili are speaking in their own language.

Jul 'Mdama walks up to Glassman.

Jul walks towards Glassman and growls.

Glassman sighs and looks down on his work.

Glassman stands up in front of Jul, Gek pulls on his leash and growls. Jul growls also.

Glassman looks up at the shrine.

Jul starts walking towards the crowd of Sangheili behind him.

All the Sangheili begin to shout and raise their energy swords.

Retrieved from "https://halo.fandom.com/wiki/Spartan_Ops/Season_One/Didact%27s_Hand?oldid=1752862"
Community content is available under CC-BY-SA unless otherwise noted.