Spire[3] is a multiplayer map in Halo: Reach. It was first talked about very briefly in the Bungie Weekly Update for July 16, 2010, and the map's official name was revealed in the Forge World ViDoc, which launched on July 22, 2010.[4] The map is compatible with Invasion,[4] and is the opposite of Boneyard, having a Spartan offense and Elite defense.[5]

The map is set on a beach with rocky cover. There are a few pathways to the focal point of the layout of the map, an immense, towering Covenant shield generator spire. Both the bottom and upper levels of the map are playable areas. The lower portion of the structure is a flat dome shape with an open tunnel running underneath. The mid level is the location of the second set of generators, accessible normally by riding the gravity lift up to the top of the lower portion of the spire and jumping down, though the generators are accessible by just the gravity lifts if the player reacts fast enough. The upper portion is an enclosed circular structure supported by 9 energy beams and has an energy balcony that encircles it. The top of the spire emits an energy barrier that envelopes the playable area. It is possible to jump from the top of the spire, though the result is normally death unless the player lands on one of the light gravity vents, lands on a passing air vehicle, or breaks their fall with a burst from the Jet Pack Armor Ability. When playing Invasion, three Gravity Lifts spawn in phase three, which allow ground access from the bottom of the Spire. There is a partially constructed Covenant AA to the side of the spire. 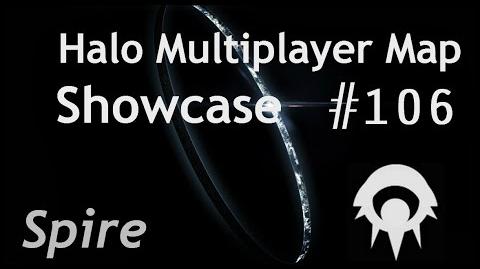 Battle at the top floor.

A view of the top floor.

A Sangheilli assasinating a Spartan.

The area around Spire
Add a photo to this gallery

Retrieved from "https://halo.fandom.com/wiki/Spire?oldid=1793927"
Community content is available under CC-BY-SA unless otherwise noted.