Widely billed as the spiritual successor to Blood Gulch and Coagulation, Standoff is nonetheless dissimilar in many ways, being smaller in surface area, with larger, more labyrinthine bases. It also has a similar division of power weapons, with both sides starting with Rocket launchers. Each base has quick access to a Warthog out front,[2] and a Spartan Laser in the middle. Standoff is best suited for mid-size symmetrical objective games.

The map is set on a peninsula surrounded by cliffs on three sides, the fourth instead has a single gate barring entrance from the main road. Because of the large satellite dishes in the distance and many signs in this area, it is presumed to be a UNSC ICBM launch and communications facility. There are three missile silos in three edges of the map with the two large bases on either side of them, and in between them still is a slight dip with clumps of rocks shielding the two bases from direct fire.

The bases themselves are extremely large compared to the ones of previous maps and have several main rooms with smaller rooms and exits branching off them. There is a switch inside each base that opens the windows to allow vision and also opens an automatic doorway allowing people in and out. In Capture the Flag games and Assault, this doorway is often used as an escape route and tactics include either waiting the bomb carrier outside the door while another player opens the door, or having the flag carrier run towards a waiting Warthog outside the entrance. Both prove effective.

On top of the bases are several fortifications along with Mongooses and a single Machine Gun Turret behind sandbags. These serve to discourage attackers along with the presence of the Spartan Laser.

There is also an Active camouflage power-up near both bases, next to each team's Rocket launcher, and when used effectively one can get into a base, take everyone out and get the objective in or out. Note that the rockets have been reduced to one magazine in order to make the map more balanced. The two bases each contain Battle Rifles, an SMG, grenades, a Brute Shot, a Mauler, an Assault rifle, a Magnum, and a Shotgun. There are also two Needlers near the Bubble Shield (one for each missile silo) and a few Spikers scattered around the map.

An outside view of Standoff.

The exterior environment of Standoff. 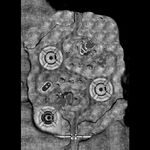 A view of Standoff from above.

The Man on the Satellite.

Active Camo by the mini tower

Active camo by the tree 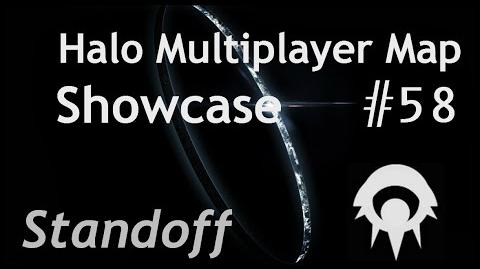