“I still have nightmares about the Stealth Elites... they would come out of nowhere. You had to look very, very closely; you could see the air move just before they jump you. But then it was usually already too late...”
— Private Roger Alfarsi[1]

The Stealth Sangheili is a Sangheili rank of the Covenant, and later the Swords of Sanghelios.

Stealth Sangheili are usually armed with plasma rifles, either single-wielded or dual-wielded. Frequently, these soldiers use energy swords, and often lie in wait in order to ambush their enemies. They are also far less prone to make tactical mistakes, such as not charging directly into a fight and taking cover more often, which is important due to their relative lack of shielding. Their agility and Active camouflage makes them difficult targets to hit, and they often attack in pairs, very much like Mgalekgolo.

The best way to combat a Stealth Sangheili in Halo: Combat Evolved would be to take advantage of their weak shielding. The Pistol and the Sniper Rifle will kill them with a single shot to the head, though it can be difficult to land shots due to the Sangheili's agility and camouflage ability. The sniper rifle's night vision makes this easier because it makes them quite visible. The Assault Rifle is very effective at close range, as its ability to fill the air with a large number of projectiles reduces the need for accurate aiming, and allows the player to find the Sangheili more easily while they are still camouflaged. Explosives are also effective when trying to flush them out of cover or to inflict damage.

Despite having Active camouflage, when a Stealth Sangheili is equipped with an energy sword, the sword's glow will give away their location, making for an easy kill. This is more difficult in Anniversary, as the glow around their swords is diminished.

In Halo 2, use head shot-capable weapons such as the Sniper Rifle, Magnum, Battle Rifle, or the Covenant Carbine. Their relatively weak shields can be broken easily by these weapons, and like any other Sangheili soldier, they can be killed by a single headshot while unshielded. Marksman weapons such as the Sniper Rifle can kill them with a single headshot even when fully-shielded depending on difficulty you're playing on. The Shotgun is very effective when combating a Stealth Sangheili in a close quarter’s environment.

Stealth Sangheili appear frequently in the Halo 2 campaign and mainly the level Outskirts on Legendary, though they also appear in the underwater structure in the level Regret, and on Gravemind.

These Sangheili are clad in armor that comes in several different variations. They are a specialty class, like the Rangers, and are suited for stealth operations.

During and prior to the Battle of Installation 04, their armor was a light cyan and gray color, wore pointed helmets and shoulder pads (signifying rank), and had a Forerunner glyph on their back. However, this armor system did not allow for use of a personal energy shield, allowing for a quick and easy kill if their location is known.

During the Battle of Earth and the Battle of Installation 05, these Stealth soldiers received updated and improved armor. The color was changed from a grayish tone to either a brown and steel or silver and steel color. In addition, the designers added in personal energy shields for increased survivability. The shielding system worn by Stealth Sangheili is significantly different from any other armor system worn by the Sangheili. Stealth Sangheili' shields recharge incredibly quickly, much faster than any other shield system seen in use in the Halo universe (including the shielding systems of Sangheili combat harnesses, Spartan power armor, and Jiralhanae power armor). Additionally, Stealth Sangheili appear to have almost twice as much health as a standard Minor Sangheili. On the downside, these shields are noticeably weaker than those worn and used by Sangheili Minors, with almost 50% the shield strength of a Minor Sangheili's shields. 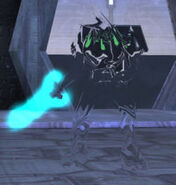 Retrieved from "https://halo.fandom.com/wiki/Stealth_Sangheili?oldid=1826693"
Community content is available under CC-BY-SA unless otherwise noted.