Space operations such as naval battles, blockades and glassing

Commanders of entire fleets and armadas

The rank Supreme Commander is one of the highest ranks used by the Covenant Navy. The rank is only known to be issued to the Sangheili. They command large fleets and armadas. Despite the high status of the title, a Supreme Commander is lower in rank than an Imperial Admiral.

Supreme Commanders command large Covenant Fleets, such as the Fleet of Particular Justice, which was formerly led by Thel 'Vadamee[2] before he was stripped of his rank due to his failure at Installation 04.[3] Lesser fleets may be commanded by Fleet Masters, who are of a lower rank than the Supreme Commander.[citation needed]

When commanding a fleet, Supreme Commanders wear purple or gold armor with a purple cloak that wraps around and over the shoulder pauldrons.[4][2] The armor also features an ornate helmet. It is likely that this non-standard armor serves a ceremonial purpose.[2]

The Supreme Commander's unusual helmet looks somewhat similar to that of the Sangheili Combat Harness. However, when Thel 'Vadamee appeared before the Covenant High Council, he sported golden Zealot armor.[3] This may signify that the cloak is only used when commanding fleets, or that he chose not to wear his cloak before the Council as a sign of modesty.

While commanding the Third Fleet of Glorious Consequence, Supreme Commander Luro 'Taralumee wore armor that resembled that of most Sangheili Zealots, though it was more ornate, possessing prongs similar to those on 'Vadamee's helmet.[5]

Thel 'Vadamee, in front of the council in his cloakless armor. 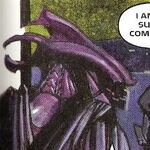 The rear of the ceremonial helmet.

Render of the non-ceremonial armor.