Chieftain of the Jiralhanae

“A bloody fate awaits you and the rest of your incompetent race, and I, Tartarus, Chieftain of the Brutes, will send you to it!”
— Tartarus to Thel 'Vadam

Tartarus was the last known Chieftain of the Jiralhanae to serve in the Covenant. He was the Arbiter's primary rival during the Battle of Installation 05 and acts as the Hierarchs' chief enforcer or, more accurately, Truth's second-in-command. Following the start of the Great Schism, he was the leader of the entire Covenant military.

He is also the tertiary antagonist and final boss in Halo 2.

Tartarus started life as the nephew of a venerable and religious pack leader known as Maccabeus. He took on the childhood nickname of "Tartar." Wearing the scarlet armor of a Brute Captain, the young Tartarus was part of his uncle's crew of one of the few Brute-controlled ships in the Covenant, the Rapid Conversion. The Sangheili did not approve of a Jiralhanae controlling a ship and had disabled many of its key features such as some of its plasma weaponry, gravity lifts, and other useful mechanics, but Maccabeus' faith in the Great Journey helped him turn a blind eye to this unfair treatment. Soon the Grunt Deacon Dadab and his companion Lighter Than Some (a Huragok) found themselves on board the Rapid Conversion after escaping the destruction of their ship, the Minor Transgression, a Kig-Yar pirate ship which had been previously destroyed by Staff Sergeants Byrne and Johnson.

Maccabeus summoned Tartarus at the pair's explosive arrival and would later become a protector of the Engineer when the resentful Yanme'e on board set out to kill it for taking their job: repair and maintenance of the vessel. He journeyed to Harvest during the first contact between the Jiralhanae and the Humans, in a staged offer of peace that soon erupted into battle. Tartarus found himself aboard a Type-25 Troop Carrier that was soon destroyed, although he did not evacuate until he had tried everything to save Ritul, a young pack mate of his, from the destruction. Ritul burned to death before Tartarus could save him.

After being attacked by the Humans in a trap designed by Loki, the Rapid Conversion was left severely damaged with Maccabeus on board. After Tartarus returned to the crippled ship he confronted Maccabeus about the legitimacy of their search for holy artifacts. Tartarus then challenged his uncle in the ritualistic manner of Jiralhanae to a fight to the death. He made concession to his wounded opponent by allowing Maccabeus to keep his weapon and removing the ammunition from his own. He successfully killed Maccabeus and received his uncle's weapon, the Fist of Rukt. Through this fight, Tartarus began his ascent to the upper echelons of power.[2]

Later during the battle on the Tiara above Harvest, Tartarus was dealt the most insulting wound of his life when Dadab shot him with a charged plasma pistol shot. After killing Dadab with the Fist of Rukt his injury forced him to retreat and abandon combat against Johnson and the militia.

Even before the events surrounding the Battle of Earth, the Prophet of Truth had trusted Tartarus enough to dismiss the Sangheili Honor Guardsman (that never left the Prophets unprotected) in order to speak to him alone. Tartarus had scoured the wreckage of the Covenant attack coordination station Unyielding Hierophant after its destruction at the hands of the SPARTANs during Operation: FIRST STRIKE. Tartarus reported the Covenant Fleet preparing to attack Earth was largely destroyed, and an artifact of the Forerunners that was able to bend time and disrupted Slipspace was almost entirely lost. The pilots had managed to recover three small chips of the crystal, (the rest of which were lost in Slipspace after Corporal Locklear destroyed it with C-7 Foaming Explosive) which Tartarus presented to Truth.

Tartarus was instructed to reward the surviving pilots well, then execute them all quietly to ensure Truth's plans remained secret from the rest of the Covenant. He was also ordered to bring Supreme Commander Thel 'Vadamee, who was unable to stop the destruction of Installation 04, before the Council to let "his fate match the magnitude of his failure." Tartarus branded the Commander with the Mark of Shame and took him to the Mausoleum of the Arbiter for his execution. When the Sangheili was pardoned and promoted to Arbiter, Tartarus was obviously displeased, but kept silent out of respect for the Prophets.[3] Tartarus provided aerial support for the Arbiter during his mission to assassinate Sesa 'Refumee on Threshold. The Arbiter encountered the Oracle during his duel with 'Refumee, and Tartarus quickly captured it and brought it back to High Charity.[4]

Using information gained from the Oracle, the Prophets of Truth and Mercy sent the Arbiter and Tartarus on a mission to obtain the Sacred Icon on Installation 05.[5] However, as soon as the Index was obtained, Tartarus betrayed the Sangheili, apparently acting on orders from the Prophets. Also on the Prophets' orders, Tartarus captured four humans LCDR Miranda Keyes, SgtMaj. Avery Johnson,[6] GySgt. Marcus Stacker and SSgt. Marcus Banks, as they required a Reclaimer to activate the Installation. He chose Miranda Keyes to activate Delta Halo and then told his Brutes to kill the others.[7]

In the Control Room, while trying to coerce Commander Miranda Keyes into activating the ring, Tartarus was confronted by Thel 'Vadam. Despite Thel's warnings of the betrayal of the Prophets and even 343 Guilty Spark's own account of Halo's true purpose, Tartarus remained unshakably loyal to the Hierarchs and retained blind faith in their promises. His hatred for the Sangheili and his desire to secure the Jiralhanae's place in the Great Journey kept him from seeing reason, and he forced Keyes to unify the Index with Installation 05's control panel activating the ring. Tartarus declared that the Jiralhanae, not the Sangheili, would be the escorts of the Prophets to the Divine Beyond and then engaged Thel 'Vadam, while Sgt. Johnson and several other Sangheili, confronted the Jiralhanae who were protecting the Chieftain. Tartarus used the Fist of Rukt to devastating effect, killing many of the attacking Elites, but was eventually brought down by Thel 'Vadam after Johnson lowered Tartarus' overshields with a Beam Rifle.[7]

Tartarus is easily recognized by his silver fur, very deep voice, his distinctive "Mohawk," and the fact that he wielded the Fist of Rukt. His devotion and faithfulness to the Covenant and the Prophets is unwavering, and he strongly represents the general attitude of his entire race: rough, arrogant, and disdainful of the Sangheili. He was a powerful, aggressive, and intelligent leader who inspired both fear and respect in his Jiralhanae forces. Tartarus is also the nephew of Maccabeus, whom he killed on the bridge of Rapid Conversion in order to gain the position of the Chieftain of the Jiralhanae. Also, Sergeant Johnson refers to Tartarus as "Mr. Mohawk" on Halo 2's last mission, when talking to Thel 'Vadam.

Before he became Chieftain, Tartarus wielded the Type-25 Carbine with deadly force, with both its projectiles and fierce blades. Tartarus used an empty Carbine in his battle against his uncle Maccabeus. Eventually, he defeated Maccabeus and gained his new primary weapon, the Fist of Rukt. Tartarus was able to wield the Fist of Rukt with great strength, effortlessly decimating foes in a single blow. In the battle between the Arbiter during the Battle of Installation 05, his shield was so strong that only direct hits from a Beam Rifle could penetrate it. The shield quickly recharged, making Tartarus invincible once more. Even without his shield, Tartarus was still able to take enormous amounts of damage before succumbing to his injuries, a trait all Jiralhanae share.

The Fist of Rukt is the personal weapon of Chieftain Tartarus. It not only serves as an excellent melee weapon, but can alter gravity to move objects and living beings around. It is passed down from generations to generations in his family, by killing the current Chieftain in a battle. It is believed to be the first seen and most powerful Gravity Hammer in existence though this can be disputed. It was not mentioned after Tartarus' death, despite non-canon references by Unggoy in Halo 3.

Render of Tartarus wielding the Fist of Rukt.

Tartarus anticipates the Prophets' decision of the Arbiter's fate.

Tartarus in-game invincibility.
Add a photo to this gallery

A close-up cinematic render of Tartarus. 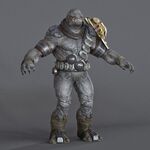 A comparison cinematic render between Tartarus and the Brute Minor's texture.

A comparison cinematic render between Tartarus and the Brute Major.

Tartarus, triumphant that Halo has been activated at last.
Add a photo to this gallery

The Tartarus action figure.
Add a photo to this gallery

Retrieved from "https://halo.fandom.com/wiki/Tartarus?oldid=1824682"
Community content is available under CC-BY-SA unless otherwise noted.