Were you looking for the series of seven easter eggs in Halo 3, the Terminals?

Terminal is a fairly large asymmetrical multiplayer map in Halo 2. Terminal was added to Halo 2 in the Maptacular Pack.

It is set on Earth, in the city of New Mombasa, in a huge train station called Liwitoni Station. MagLev trains speed through the level at regular intervals. This map includes the Wraith as the default heavy for multiplayer.

There is a thunderstorm either to the north or to the south of the station, although the skyscrapers mostly hide it.

In Terminal Station Level there are PA announcements to add a bit of realism to the map. The announcements, instead of being dry and generic bulletins, are in fact a relatively amusing source of in-jokes, Easter eggs, and Bungie references.

To hear the announcements clearly enough you can stand on the ramp that goes from the raised area inside the terminal up to the station platform. Look at the column with the scrolling "*STATION CLOSED FOR MAINTENANCE*" sign. Just above that sign is an inclined setback. Jump from the ramp to the part of the setback just to the right of the megaphone (you may have to crouch jump to make it). It'll take a few tries, but once you land there without slipping off, you stay there. Now the announcements are loud and clear. The best sound quality can be had by looking towards the map of New Mombasa near the floor.

Or you can listen to the announcements themselves at the HBO Halo 2 Dialog database.

In CTF, it's a good idea to attempt to draw the enemy with the flag onto the tracks so you don't waste your ammo.

In a capture the flag match, it would be best if you are attacking, to jump into a Warthog (a Gauss Warthog) and get a gunner. Do not wait for other teammates to get in the passenger seat. Instead of going up the ramp, go in between the ramp, and the train wall, and take out the Wraith as quickly as possible. It does not matter if nobody is in it. Just destroy it; this will help your team a lot.

An excellent game mode to try is slayer with Brute Shots and Carbines. The map has an excellent variety of open ground and elaborate buildings that are excellent for such a game style. While I do not suggest the Wraith, Ghosts provide an interesting touch.

Terminal was designed by Chris Carney (who was inspired by the SkyTrain in Wikipedia:Vancouver), and the artist for the map was Mike Zak. Robert McLees provided the fictional transit map for this map.[2]

Jaime Griesemer had come up with two ideas that became the central design elements of the map: a vehicle focused, asymmetrical 4v4 map, and a map where the flag return would be contested.[2]

In the early design of Terminal, the light rail train was originally going to be engulfed in flames and people screaming could be heard from the inside as it passed by. The flames were later removed, probably because it was assumed to be too harsh, even for a multiplayer map. The screaming of panicked passengers can still sometimes be heard if you are attentive, as well as the conductor sounding the horn of the train, although much easier to hear. It can be heard in the "Passengers connecting to Orbital Shuttle Hub board westbound trains" file from here.

Many of the assets, such as the windows and building designs, created for the campaign level Metropolis were finally used in this level because Bungie ran out of time during the development of the campaign.[citation needed] 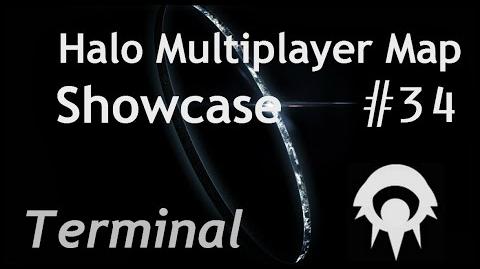 Retrieved from "https://halo.fandom.com/wiki/Terminal_(level)?oldid=1794171"
Community content is available under CC-BY-SA unless otherwise noted.