Looking for the Halo 2 Vista achievement, the Arbiter rank, or the current Arbiter Thel 'Vadam?

The Arbiter is the sixth campaign level of Halo 2, which introduces the Arbiter Thel 'Vadamee as a playable character for the first time. You must assassinate the Heretic Leader on a Forerunner Gas Mine in Threshold's atmosphere.

The mission involves neutralizing Heretic forces. Along the way, the player will have to open a hangar door for reinforcements, fight, for the first time in Halo 2, Sentinels, and fly a Heretic Banshee to escort a friendly Phantom that is looking for where the Heretic Leader escaped to.

A blurry camera shot focused on the floor, before clearing and focusing on the back of Tartarus. The shot then changes to show Tartarus walking down a hallway in High Charity, two Brutes behind him, carrying Thel 'Vadamee on their shoulders. They are walking through a prison.

The Brutes pass a cell containing three hungry Jackals, which hiss and growl as they reach out through the bars at the Brutes passing by.

The Brutes and their cargo move out onto a platform overlooking the Mausoleum of the Arbiter. They ride a Gravity Lift down to the walkway leading up to it and pass dozens of Elite Honor Guards standing at attention, staves ready. They enter the Mausoleum, where the Prophets of Truth and Mercy await. The Brutes and Tartarus bow.

Close-up on the Prophet of Truth's lower jaw.

Tartarus hesitates, and then bows again.

The Brutes drop 'Vadamee to his knees and rise, leaving the room. The Sangheili touches the Mark of Shame on his chest.

Truth presses a button on his chair and a miniature hologram of an Elite in abnormal equipment appears.

Truth cuts off the hologram.

A large pod floats into the center of the room, opening to reveal a suit of ancient armor surrounded by white light. 'Vadamee stares at this for a moment, before turning back to Truth.

Thel 'Vadamee rises and walks toward the armor. He pauses before it, and looks to the pods containing the bodies of the Arbiters who fell before him. He reaches up and takes the helmet of the Arbiter, and places it upon his head. He turns to the Hierarchs.

The scene changes to show the outside of High Charity, the fleet surrounding it. Three Phantoms fly past the camera and swoop past the ruins of Installation 04, a large piece of it still intact and with landscape and clouds still visible. As it flies, the voice of Rtas 'Vadumee can be heard.

The scene cuts to the inside of the center Phantom, where Special Ops Elites, along with the new Arbiter, line the walls, with a line of Special Ops Grunts in the center. An Ultra Elite, the SpecOps Leader Rtas 'Vadumee, walks among them.

A Grunt fumbles with the methane tank of another Grunt. Some gas is released, and the second Grunt mutters angrily at the first.

Note: the Hidden Subtitle appears here. It is "Scrape them as excrement from our boots!"

'Vadumee turns his head to face the camera, revealing he is missing the mandibles on the left side of his head.

The Phantoms enter Threshold's atmosphere and come upon a large Forerunner platform.

Scene fades back to inside lead Phantom. The Spec Ops Leader approaches 'Vadamee. They stare each other down.

The Phantoms fly over the Forerunner platform and descend toward another structure dangling below it on a long cable, a Gas Mine. An intense storm swirls below the structure.

The Phantoms fly lower, near the top of one of several towers sticking out from the center of the main structure. One deposits a group of Grunts and an Elite, followed by a second one that drops two Elites and 'Vadamee.

'Vadamee ignites his Energy Sword and looks at it.

A Whisper in the StormEdit

'Vadumee enters the airlock beyond, with a team of SpecOps Grunts and SpecOps Elites.

The Grunts and Elites fade into their surroundings as their Active camouflage is engaged.

The team enters the next room. If you wait without being seen for a moment, the two Heretic Elites in this room will talk to one another.

Later, the team enters an elevator and descends into a hangar containing a Seraph. A new enemy appears: the familiar Sentinels.

During the battle in the hangar:

'Vadamee descends through the facility eventually entering a room featuring a window looking out onto a landing pad with three Heretic Banshees. The Heretic Leader, Sesa 'Refumee appears.

He hops onto a Heretic Banshee and flies off.

After the first wave of Banshees is eliminated.

If you take too long to head for the final emplacement.

The Arbiter clears the platform and arrives at the door. Fades to white.

The Arbiter level image for Halo 2.

The Mausoleum Of The Arbiter.

The Gas Mine.
Add a photo to this gallery 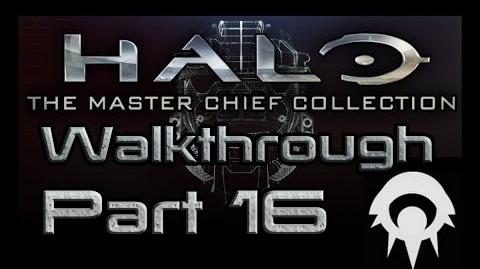 Retrieved from "https://halo.fandom.com/wiki/The_Arbiter?oldid=1816661"
Community content is available under CC-BY-SA unless otherwise noted.