The Core is the name given by 343 Guilty Spark to the massive repository of knowledge found in the Control Room of every Installation, and, more practically, the computer system which stores this knowledge.

The Core is the most indispensable part of a ring Installation. It directs and controls every other aspect of the ring world, and provides information on the rate of spin, the atmosphere, the weather, the highly complex biosphere, as well as the extent of a containment failure in the event of a Flood outbreak, and is the location that the rings may be activated by way of the Index. The manner in which this is done is not entirely clear, but it seems that the Index must be physically brought into contact with the Core by a Reclaimer.

Although it is not certain that only a Reclaimer can perform this action, it seems very likely. 343 Guilty Spark said that he was not allowed to (although not that he couldn't) [1] and Jiralhanae Chieftain Tartarus seemed to think that it was impossible for him to do so. Once the Index has been 'reunified' with the Core, the Installation's firing sequence begins. However, if the Index is forcefully removed before the fire sequence begins, all seven Halo rings go into standby mode, ready to be fired remotely from the Ark.

The Core seems to be restricted-access according to Guilty Spark's "protocol."[2] Certainly, an AI inside it has a surprising amount of control, Cortana was able to make 343 Guilty Spark fall to the floor just by waving her hand, indicating the ability to override some of the Monitor's powers. It is possible that the Core can control the ring's gravity and, by extrapolation, its atmosphere, spin and other functions as well.

Installation 04's Core was, at one point, inhabited by Cortana. While inside, she obtained a tremendous quantity of knowledge, which some speculate caused damage, and possibly even rampancy. However, this position enabled her to learn of the Flood and Captain Jacob Keyes's plight against them. More importantly, it enabled her to stop the Installation from firing and steal the Index when John-117 had attempted to activate Halo's firing process.[3] It is possible that Cortana's time in the Core is what gave her the knowledge of the Ark and its Portal.

Installation 05's Core has not been visible for more than a few seconds thus far. However, it seems to function in the same manner as its Alpha Halo counterpart.

The core of Installation 04. 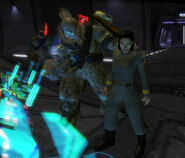 The core of Installation 05.
Add a photo to this gallery

Retrieved from "https://halo.fandom.com/wiki/The_Core?oldid=1794200"
Community content is available under CC-BY-SA unless otherwise noted.