The Docks is a Halo Wars multiplayer map[1] set in Pirth City.

Seemingly, the map is set deep within a dense urban area of Arcadia, likely to be set within the same city as the one visited in Campaign. The Docks is a rather large map, designed for two teams of two players, separated by a (relatively) massive building stretching across most of the length of the map. The map can be divided into two halves located on either side of this large building, each team residing in different halves. The two halves are virtually identical, both housing three possible base sites (not including the two that both players of the team start with), one free site closest to the two starting bases, and the other two farther away already occupied by a fortified rebel base.

Taking the form of wrecked vehicles, there are numerous cover areas positioned strategically around the map, alongside several sniper towers positioned to defend points of strategic interest. The two sides are linked by a large street that passes through the large building separating the two sides, an area in which plenty of fighting is bound to occur. 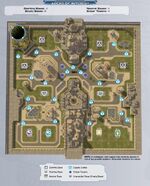 A strategic map of The Docks.