Were you looking for the Great Journey, the Covenant belief?

The surface of Installation 05.

The Great Journey is the fifteenth and final campaign level of Halo 2. As Thel 'Vadam, you will fight alongside other Sangheili, and several Mgalekgolo, to reach Tartarus and stop him from activating the rings. You will work alongside a Scarab Tank being controlled by Sergeant Major Johnson to break into to the door of Delta Halo's Control Room where Tartarus is located. Then, you must bring down the Jiralhanae Chieftain, Tartarus.

Scene fades in on Thel 'Vadam and Rtas 'Vadum, who is in a Wraith with its hatch open, conversing. The two are looking towards the Control Room of Delta Halo

Vadam turns to face the Control Room as Rtas 'Vadum enters his Wraith and closes the hatch behind him.

As they travel to where a Scarab is visible, docked up on a ledge:

After clearing the area:

Vadam walks into a room with a Sangheili and two Mgalekgolo.

'Vadam fights his way to a room where two Sangheili Councilors and two Mgalekgolo are being held prisoner behind force field doors.

If the SpecOps Sangheili lives at this point and follows you to the room:

Once you clear the room, free the Mgalekgolo and Sangheili Councilors, then head to the top floor to the Scarab.

'Vadam and his Sangheili arrive upon a group of Jiralhanae preparing to execute the Marine prisoners.

Vadam turns around to see the Scarab's main cannon aimed at him.

Cut to Scarab's helm, Johnson at the controls.

Two Banshees arrive and the Sangheili pilots jump out

Vadam does so, Johnson fires on enemy Wraiths.

They approach the Control Room.

If 'Vadam moves when Johnson is counting:

If 'Vadam turns back:

Vadam either kills the guards or sneaks past them, then heads into the main chamber of control room.

He slams the Index on the console, which flashes red lights.

Tartarus grabs 343 Guilty Spark and jerks him around and growls.

Tartarus lowers 343 Guilty Spark to see Johnson standing next to 'Vadam. He holds a Beam Rifle and aims it directly at Tartarus.

Tartarus barks as commanded, the Jiralhanae back off.

Close up on 'Vadam, he lowers his head in sadness.

Tartarus pauses, then throws 343 Guilty Spark at Johnson's head, knocking him down. He then grabs Keyes' hand and forces the Index into the console

Tartarus grabs his hammer as his energy shield turns on. The main platform splits into three as Halo charges up.

Sangheili reinforcements show up and wipe out the Jiralhanae Captains. Tartarus jumps to the platforms. Johnson hangs back, firing on Tartarus with his Beam Rifle.

After 'Vadam scores a hit on Tartarus for the first time:

(knocking down Tartarus' shield for the fourth time)

(knocking down Tartarus' shield for the fifth time)

Keyes jumps onto a rotating platform, ducks to avoid one of the other platforms passing right above her, reaches a main platform, and grabs the Index. The entire room shakes, making Keyes hold the Index up to her chest in fear.

Cut to exterior of Control Room. All the built up energy fires into space.

Cut to Halo's exterior, a large pulsing ball of energy is being formed in the center, the shot from the Control Room reaches it, the ball glows, explodes, then dissipates.

Cut to interior of Control Room, which seems to be running on emergency power, as many of the lights are dimmed or not functioning. Keyes stands in front of a holographic depiction, Johnson rides 343 Guilty Spark to her.

Keyes puts a hand on his shoulder.

Vadam comes up behind Johnson and Keyes.

Fade to black. Fade in on the Forerunner dreadnought exiting Slipspace, and heads straight to Earth. Covenant and UNSC ships are engaging each other.

Fade in on interior of Forerunner ship, John-117 listens in.

Fades in on the Flood-infested High Charity.

A Flood spore floats through the air, the camera pans off to the walkway outside the Council Chamber.

Cut to a damaged door that keeps trying to close, Gravemind's tentacles creep through.

Cortana's hologram appears, she holds up her hand, the tentacles stop and move off.

A ball of energy forms in the center of Halo.

Halo went into emergency standby ready to fire from the Ark.

The Forerunner Ship Dreadnought heads for the Ark Portal.

Cortana talks to the Gravemind.

Rtas 'Vadum and Thel 'Vadam looking at the Control Room, as seen in a pre-release Halo 2: Anniversary.

A Panorama shot of the back-side of the Scarab.

A Panorama shot of the back of the Scarab. 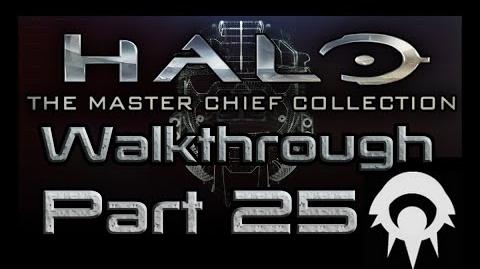