This article is about the level in Halo 2. For more uses of the term heretic, see its disambiguation page.

Aboard High Charity and Cairo Station

The Heretic is the first Campaign level of Halo 2 and consists entirely of the cinematics. It depicts Thel 'Vadamee's hearing by the San'Shyuum and John-117 receiving his MJOLNIR Mark VI armor.

Scene begins with a Golden Lich flying through the sky. The scene changes to an interior shot, where a Sangheili solder is conversing with Jameson Locke.

Locke then takes out a storage device and projects a holographic image of John-117 from it. Thel recognizes it immediately.

Fade in on the broken pieces of Installation 04, still burning. Groups of Covenant CCS-class battlecruisers prowl among them.

An Assault Carrier flies by. The camera pans with it to a giant Covenant structure.

Close up of High Charity. Hundreds of Covenant ships swarm around it.

Fade to a ledge across from tiers of stadium-like seats; several Banshees patrol around it. The camera slowly zooms toward a door on the back of the ledge. A voice is heard:

Fade in to the Council Chamber. Rows of Honor Guard Elites stand at attention on the path leading to the end, where a single Sanghelli Zealot stands facing two High Prophets, explaining past events to them.

The camera focuses on the stadium seats filled with Sangheili and San'Shyuum High Councilor. They mutter amongst themselves.

(Flashback): The Pillar of Autumn flees Reach as Covenant ships glass it.

(Flashback): A Covenant Cruiser approaches Installation 04, several dozen smaller ships are already in orbit above it. The gas giant Threshold is visible behind the installation.

It is revealed that the Prophet of Regret is not actually present, but rather speaking through a holographic image of himself. Next to him is the Prophet of Mercy, who is entirely present.

The Council members mutter angrily. Vadamee looks around at them.

The Prophet of Truth moves forward on his chair and raises his hand. The room falls into complete silence.

(Flashback): The destruction of Halo.

The San'Shyuum High Councilor stand up and yell angrily. Sangheili High Councilors glance and mutter to each other. Jiralhanae Chieftain Tartarus, standing nearby with arms crossed, chuckles audibly to himself.

The Councilors yell. 'Vadamee looks back and forth between them.

Truth glances at Tartarus, and the Jiralhanae Chieftain barks a command. Two Jiralhanae approach 'Vadamee and try to grab him, but he shakes them off and he starts walking. They escort him out.

View fades to a new background. The circular ornament on the Prophet of Truth's headpiece is replaced by Earth's moon. The view then pans to a view of Earth itself, focusing on three MAC stations in orbit. A few UNSC ships fly past.

Cut to a close-up of the nearest platform, Cairo.

Cut to the armory of Cairo Station. The UNSC officer handles equipment on a table.

The view shows the Chief's new helmet on the table .

The view pans up the Chief's body, showing off his new armor. He fits his helmet into place just in time to block the view of his face. The helmet hisses and clicks when put on, then shortly stops. 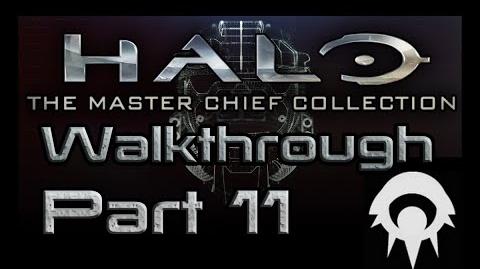 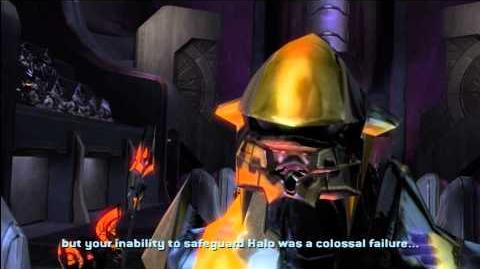 The Heretic level image for Halo 2.

Thel 'Vadamee being escorted out of the Council Chamber.
Add a photo to this gallery

The Covenant arriving at Installation 04.

The Autumn escaping Reach.
Add a photo to this gallery

Retrieved from "https://halo.fandom.com/wiki/The_Heretic?oldid=1814686"
Community content is available under CC-BY-SA unless otherwise noted.