Looking for the Library structure?

Inside the Library of Installation 04

The Library is the seventh campaign level of Halo: Combat Evolved. It begins after 343 Guilty Spark teleports John-117 from the swamp he was in (part of the previous level) into the Library of Installation 04. John-117 must battle through four Flood-filled storeys to reach the Index chamber.

The view fly through of the main central chamber of the Installation, through a bizarre rotating doorway, to find 343 Guilty Spark and John-117 teleporting in.

Over the course of the level, 343 Guilty Spark mutters all sorts of random phrases. Here are most, if not all of them:

When John emerges into the large central chamber.

When John comes to a huge door, which is locked..

If John heads to the wrong way.

As John and Spark move into the next hallway:

Upon moving down another hallway.

Upon entering into another hallway.

As John goes down yet another hallway.

Further down another hallway.

As the Monitor Spark sends a squad of Sentinels to assist John.

As John rides the first lift to upstairs.

Wait, It Gets Worse!

Towards a little down the first hall of the second floor.

The Monitor leaves temporarily, and soon returns to John with the door open.

Once John encounters another large door.

As Chief approaches another hallway on the second floor.

Into once again another hallway.

But I Don't Want to Ride the Elevator!

John goes into the first hallway of the third floor.

John comes into another hallway, but this time it's large, open, cavernous.

Spark once again leaves and returns to John-117.

John encounters yet another hallway, but this time with slightly more Flood forms.

John rides on the platform lift to the fourth floor.

John enters the first hallway of the fourth floor.

When the platform comes to a stop.

John walks slowly over to the Index, which is held in a sheath of some sort. A series of metal blocks encircling the Index move in and out for a few moments, before the Index itself pops slightly out of the top of the sheath. John removes it and holds it up to examine it for a moment, before 343 Guilty Spark zaps it from John's hands and into some sort of trans-dimensional storage chamber in the Monitor's body.

Spark and John teleport away from the platform.

343-Guilty Spark flying through the Library

John-117 exploring the interior of the Library 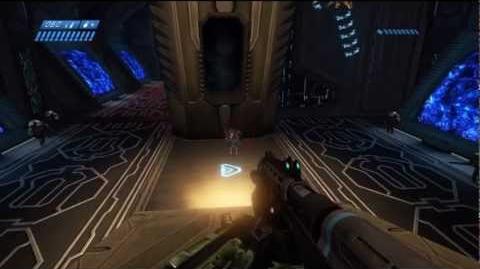 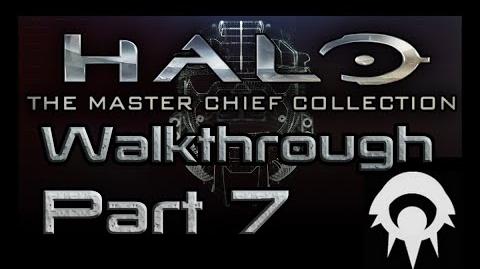