The Life, also referred to as We are ODST, is a live-action short made exclusively for the launch of Halo 3: ODST. The trailer along with the short film is directed by Rupert Sanders, who also worked on the Halo 3: Believe campaign.[2]

This short showcases the Orbital Drop Shock Troopers, an elite organization of UNSC Marines, focusing on the 19th Shock Troops Battalion during their operations in the Human-Covenant War.

The film starts with a military funeral held for SSGT K. Stark, with a young Tarkov watching, and then shows his recruitment and basic training to enlist as a Marine. Later, the video skips to a combat drop as Tarkov, now an ODST in an insertion pod, dropping towards a Covenant-held battlefield on an unknown planet, where he quickly encounters a Brute and is nearly killed, acquiring wounds to his face. The Brute closes in for the kill as Tarkov fires his pistol, but the Brute is killed by a crashing Banshee, saving Tarkov's life. The scene skips ahead to Tarkov again, now much older, the wounds on his face having become scars. He and a number of other ODST's hold a small service for a fallen comrade killed during combat, and hear a distant explosion and plasma fire in the distance. Forced to abandon the service, the ODST's put their helmets on and move out.

{The scene changes to an obstacle course. Tarkov crosses a mud pit, then leans against a wall. Trainees and instructors are yelling in the background.}

UNSC instructor 2 (background): Push yourself over that wall!

{Tarkov performs a commando crawl and a UNSC instructor follows him, firing a M6C/SOCOM pistol over his head, yelling.}

{As Tarkov takes a dive in the obstacle course, the scene changes to him being dropped into an unknown planet. Several HEVs are seen. As soon as he hits the ground, his HEV's hatch bursts open. Tarkov, along with several other ODSTs, start running to an unknown destination, firing their SMGs along the way. However, a Brute Minor knocks Tarkov to the ground, knocking his helmet off and inflicting deep gashes in his face. The Brute growls at him as Tarkov fires his SMG to no avail. The Brute closes in for the kill as Tarkov fires his pistol, but the Brute is killed by a crashing Banshee, saving Tarkov's life. Tarkov, lying on the mud, stares at the open space. The scene changes to a makeshift battlefield grave site with Tarkov, now appearing much older, and the gashes in his face having now turned into scars, along with several other ODST's standing beside him. The service having ended, Tarkov folds up the ODST flag that had been placed on the makeshift grave and puts it into a storage compartment in his armor. The view switches to a younger ODST who jerks his head up at the sound of distant needler fire. Tarkov looks toward the source and puts on his helmet which polarizes, the younger ODST does the same and the squad moves out as a song sung in Welsh fills the background. The words "We are ODST" appear then switches to 'Halo 3 ODST'.}

The actual translation of the original Welsh lyrics are : "We cheat Death from his rightful victory. No one can defeat us we are glad to plunge feet first into hell in the knowledge that we will rise."[3] 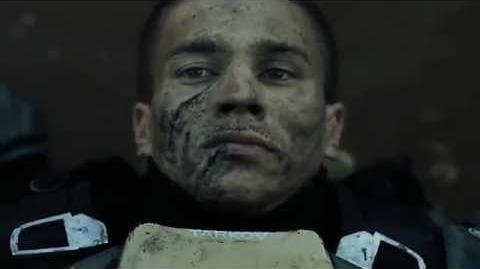 Halo 3 ODST We Are ODST 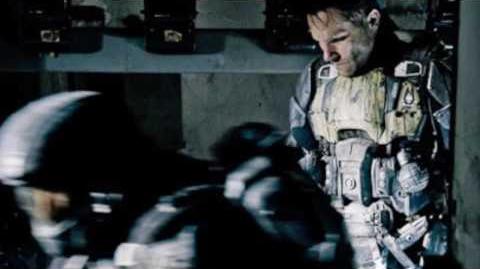 Halo 3 The Making Of "We Are ODST" + Deleted scene