Were you looking for the soundtrack, The Maw?

Inside the crash site of the UNSC Pillar of Autumn.

The Maw is the tenth and final campaign level of Halo: Combat Evolved. In this level, John-117 makes his way through the wreck of the UNSC Pillar of Autumn, in order to detonate the ship's fusion reactors and destroy Halo, the Flood, and the Covenant armada, thus preventing the destruction of humans and potentially, all sentient life in the galaxy. Just like the previous two levels, the player has no allies.

…And the Horse You Rode In OnEdit

The camera slowly pans up as it flies over the sand, revealing a burnt coastline, and a giant gouge where the terrain has been ripped away and the sea has flooded into the newly-formed canyon. At the top of that canyon rises the massive stern of the UNSC Pillar of Autumn, relatively intact. The camera circles around the side and front of her, revealing that her nose is hanging just slightly off a massive cliff, and that the antennae along the bow have been bent and torn away. The entire bow has been burnt badly; the metal is scarred. The once powerful cruiser looks almost pitiful, and it is clear its only purpose left is to destroy Halo. As the camera circles around to reveal the starboard side, a slightly damaged, smoking Banshee drifts into view.

The camera cuts to a view of the outside through one of the ship's Bumblebee docking slips. The damaged Banshee comes into the frame and veers wildly towards the Pillar of Autumn.

The Banshee drops just before reaching the Bumblebee slip and smashes into the side of the Pillar of Autumn, sending debris and fire hurling out madly.

John-117's hand appears from below and grips the edge of the slip, and he pulls himself up and onto the Pillar of Autumn.

As John-117 heads for the bridge, he discovers Covenant, Flood, and Sentinels fighting through out the ship. Eventually, he reaches the bridge.

John-117 takes Cortana's chip from his helmet and inserts it into the cylindrical terminal near the front of the bridge. Cortana's avatar appears above it.

She concentrates for a moment, and the main screen flickers to life. "Self Destruct Sequence Initiated" is displayed across the top, and numbers begin counting down from what is, as far as we can tell, a random starting point between five and fifty-nine minutes.

John-117 moves to unplug Cortana from the terminal, but stops abruptly when he hears an all-too-familiar voice.

Cut to 343 Guilty Spark in the engine room. He's busy scanning a console.

343 Guilty Spark flutters around Engineering, as groups of Sentinels hover around in the background, and scans another console.

Cut to the bridge. A tone sounds over the ship's speakers. The countdown timer freezes.

John-117 surveys the bridge carefully with his Assault Rifle, never missing a beat.

He is cut off as another tone sounds.

She turns to see John-117, who is calmly tossing a fragmentation grenade up and down

The Sentinels open fire, shattering the main display and touching off John's shields. John quickly drops behind cover, removes Cortana from the terminal and places her into his helmet, and raises his rifle.

John dispatches the Sentinels and leaves the bridge.

John heads for Engineering, fighting past more Flood, Covenant, and Sentinels. Along the way, he makes a brief detour to the ship's Armory to stock up on weapons. Inside the Armory, he is ambushed by a group of Flood, including several cloaked Combat Forms (presumably infected Stealth Sangheili). He defeats these enemies and hurries to Engineering.

John enters Engineering which is crawling with Flood and Sentinels. Guilty Spark is also present.

Throughout this entire sequence, 343 Guilty Spark mumbles randomly at John, trying to convince him to spare the installation.

John opens one of the manifolds.

John knocks out the first reactor.

John takes out the final reactor.

John reaches the elevator. A mass of Spec Ops Covenant descends to meet him. He defeats the Covenant and starts the long ride up.

A few moments later, still on the elevator.

John reaches the top of the elevator.

Warning: Hitchhikers May Be Escaping ConvictsEdit

If you leave the Warthog station on foot:

If you're still leaving the station on foot:

John drives down the corridor. Flood, Covenant, and Sentinels are fighting all around him. Eventually he nears the site where Foehammer is supposed to extract him.

If you wait for Foehammer:

Echo 419 appears banking around the hull of the Pillar of Autumn, listing badly and flaming at the engines the pelican approaches John. A pair of Banshees close in on the Pelican from the rear at both sides.

A loud explosion erupts from the Pelican's starboard wing dips sending it into a shaky dive, ablaze and out of control, Foehammer yells into the speaker as she passes under the platform.

Foehammer continues to yell into the speaker, her words becoming inaudible as the roar of the damaged engines are heard in the background. The Pelican flies into the distance, still ablaze, the Pelican struggles it's way down and out of sight with flames and smoke trailing

If you hurry past the platform, Cortana's message is cut short.

If you go where the Thirsty Grunt is.

John comes around the final S-curve in the corridor.

John clears the gap. As he reaches the bay, heavy fighting between the Covenant and Flood is seen. A Longsword fighter is docked at the end. A barricade forces John to get out of the Warthog and finish the journey on foot.

Cortana: "That's the ship! Move! We need to get aboard now!"

If the timer runs out before John reaches the Longsword:

Fades to an exterior shot of the Autumn as it explodes.

If John makes it to the Longsword:

John, with no weapon in hand, makes a break across the platform for the Longsword, the Flood closing in behind him. He makes it through the open door just before them, and slams the hatch closed as he runs through.

John sprinting for the cockpit, is jarred by an explosion and braces himself against a wall, shaking his head. He reaches the cockpit, jumps into the seat, quickly punches a series of buttons, and takes the controls in his hands.

The Longsword rises above the platform slowly, turning to face the open end of the bay, and lights its engines, rocketing away from the exploding ship. The camera cuts to an exterior view of the Pillar of Autumn, as it burns and explosions flare all along its length. A horde of Flood stumble slowly towards it, and the Longsword arrows from the starboard side of the ship away into the sky the camera cuts to follow the Longsword, looking back towards the Pillar of Autumn as the explosions intensify. The Longsword clears the atmosphere, flying away from Halo. John-117 stares straight ahead, piloting the fighter as quickly as he can. Cut to a frontal view of the Longsword; as it sweeps past the camera, the distant side of Halo is drowned out in a blinding explosion, which grows and grows, and then a massive shock wave sweeps across the ring, shattering it into sections. In the cockpit, a screen beeps and displays: "ENGINE TEMP CRITICAL."

John flips a few switches and the Longsword's engines die, leaving it drifting. Debris from the blast hurtles past it, still hot and glowing.

John-117 rises from his chair and moves to one of the Longsword's windows. Halo has broken into a few dozen large fragments, all of which are slowly spinning away from each other. As John watches, one massive fragment comes swiftly from the far side of the ring and collides with another, closer one, splitting it in half, and the two go spinning off in a giant gout of fire and debris. Silent explosions spread throughout Halo's remains. The ring has been destroyed.

John-117 shakes his head and moves back to his seat.

John removes his helmet, but the cockpit's frame blocks the view of his head. The camera tracks the Longsword for a few a moments, Basis looming large in the background, before panning to focus on a large spiral galaxy hanging in the sky, an ornament emblazoned across the heavens. A few final, dark notes of a cello play, and everything fades.

A glowing object flies away from Halo's wreckage, towards the camera. 343 Guilty Spark has survived.

Bonus Ending (This is only seen when beating The Maw on Legendary mode, and is to be considered non-canon.)

Staff Sergeant Johnson struggles with a Stealth (Zealot in Anniversary) Elite for an Assault Rifle, among a multitude of dead Flood forms with the Pillar of Autumn in the background.

They suddenly stop and turn to see the ship about to explode in the distance.

Johnson turns to the Elite.

Sergeant Johnson: "This is it, baby! (affectionately) Hold me."

The two embrace as the ship explodes and the Elite additionally places his right hand on Sergeant Johnson's bottom. In Anniversary, Johnson places his left hand on the Sangheili's bottom, and the Sangheili reacts uncomfortably.

(NOTE: this ending did not really happen in Halo canon, as Sergeant Johnson was actually on a Pelican at the time.)

The crash site of the Pillar of Autumn.

Echo 419 gets shot down by a pair of Banshees.

The front of the UNSC Pillar of Autumn.
Add a photo to this gallery 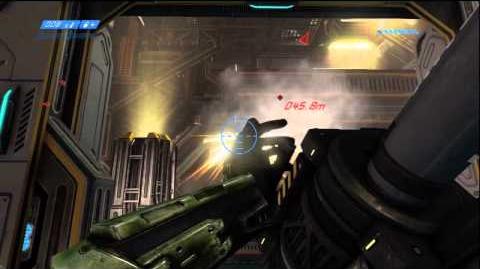 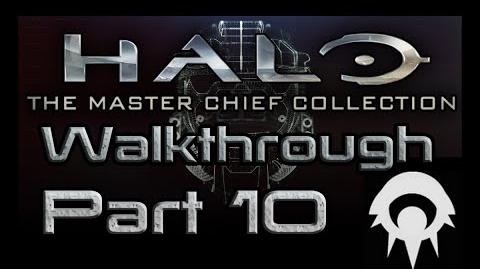 Halo-The Maw Walkthrough
Add a photo to this gallery

Retrieved from "https://halo.fandom.com/wiki/The_Maw?oldid=1811596"
Community content is available under CC-BY-SA unless otherwise noted.