Were you looking for 343 Guilty Spark or a Monitor?

The Battle of the Gas Mine

The Oracle is the seventh campaign level of Halo 2, where the player plays as Thel 'Vadamee. Starting directly after you land the Banshee you were flying in the previous level, the opening cutscene has Rtas 'Vadumee comment on smelling a familiar stench. You will again have Spec.Ops. Elites and Grunts as allies and, possibly (Depending on difficulty), an Ultra Grunt.

This is the first level in Halo 2 where you encounter the Flood and some of their new abilities, most notably the ability of Infection Forms to revive fallen Combat Forms and the shielding on some Combat Forms.

The player goes down an elevator and up to the top of the Gas Mine to cut three cables. He or she then must backtrack to the hangar of the previous structure, complete with another Banshee-flying section, where he engages in combat with the Heretic Leader to prevent him escaping Threshold in a Seraph. In the cutscene directly before the fight, it is shown that 343 Guilty Spark had survived the destruction of Installation 04 and was responsible for the "heresy" through his teachings.

The assault team proceeds through a small room, where a large tank containing some small, floating, fleshy lifeforms can be seen. The team approaches a doorway, and through the transparent floor of the next room, they can see the shadows of Heretics and strange creatures battling. Eventually, all of the Heretics are killed. The victorious creatures have familiar screams...

The creatures all leave through another doorway.

The team moves into a laboratory, strewn with deformed corpses.

A floating orb enters the room, and the image of the Heretic Leader appears in the air.

The Grunt fires on the image, which quickly becomes apparent as a hologram and nothing more.

The Grunt comes to a halt. The hologram begins to speak.

The team battles the oncoming Flood Infection Forms. Unless the Combat Form corpses are destroyed, the Flood begin reanimating them.

The Flood assault subsides, and a doorway opens out of the labs.

'Vadamee and the survivors ride an elevator down to the lower levels of the labs, fighting the Flood and Sentinels. They enter a hallway strewn with corpses.

The team advances into a lab filled with battling Heretics and Flood.

'Vadamee manages to press outside to the exterior of the station. He sees Flood battling more Heretics, and a Phantom swoops in to provide reinforcements and covering fire.

'Vadamee and his troops advance into the heart of the installation. They encounter the Heretic Leader fleeing.

Sesa 'Refumee takes cover behind a shielded door before 'Vadamee can catch him.

'Vadamee pounds angrily on the portal, but cannot break through as the doors seal. The SpecOps Commander and his troops arrive.

'Vadamee notices a hologram of the station, and watches it thoughtfully.

If you have an Energy Sword already

If you do not have an Energy Sword

'Vadamee rides the elevator to the upper level where the cable is located.

If you spend too much time fighting

After cutting the first cable

After cutting the second cable

'Vadamee cuts the final cable, and the entire station groans with the stress. All the Flood and Sentinels present stop their fighting and look upward towards the cable. The top of the station tears away, and it plummets into the atmosphere. The remaining Sentinels, if any, were swept out into the sky.

Thel 'Vadamee drops back down into the station and advances past Heretics protecting the Heretic Leader's rear.

'Vadamee enters what looks like the main power generator for the station.

The Arbiter fires at the Heretic Leader's Banshee as it flies away, then dodges as the Banshee fires at him in return. The Arbiter dashes out, and get inside another Banshee and pursues the Heretic.

The Arbiter flies to where the Heretic Leader landed.

The Arbiter's Banshee tries to land on a platform, but fails and crashes into it instead. The Arbiter holds on to the edge of the platform, raises himself up, and continues to go inside.

'Vadamee fights through the first portion of the station back toward the hangar, as explosions appear throughout the corridors. There, he confronts the Heretic Leader as he is boarding the Seraph.

The Heretic Leader turns to face the Arbiter

A familiar humming is heard. The Arbiter looks up and sees 343 Guilty Spark descending from above.

Any questions are cut off as the Heretic opens fire on 'Vadamee with twin Plasma Rifles. 'Vadamee falls back, taking cover while his shield generator recharges. As he does so, the Heretic Leader floats back toward the Seraph and pulls out two holodrones.

The Heretic Leader releases the drones, which become copies of him. They turn to look at the Arbiter.

If the player activates their Active Camouflage:

During the battle, the Heretic Leader will continue to taunt Thel 'Vadamee.

343 Guilty Spark will also talk to Thel 'Vadamee throughout the battle.

If you continue the fight long enough

If you miss Sesa 'Refumee with your shots

If Sesa 'Refumee kills you

After the Arbiter kills the Heretic Leader:

'Vadamee has killed the Heretic Leader and is dragging his corpse to the hangar door.

343 Guilty Spark is snatched by an unseen force and pulled away. He is dragged through the air, directly to the top of the Fist of Rukt, the gravity hammer of Tartarus. Tartarus, standing beneath a Phantom, pulls 343 Guilty Spark off the end of his hammer.

The Oracle level image for Halo 2. 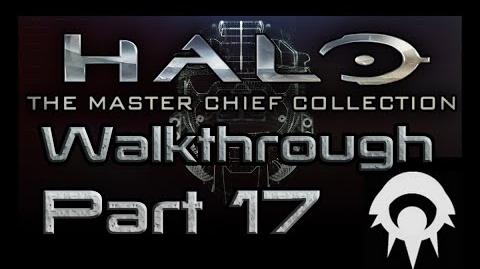