Were you looking for Catherine Halsey, the data storage unit, or the Halo Legends short?

The Package is the ninth campaign level of Halo: Reach.

The level begins on August 29, 2552. It takes place around the destroyed Sword Base, as well as in an interior cavern underneath the facility that was kept a secret.

Noble Team is ordered to destroy Sword Base in a torch-and-burn op. Noble Six and a small strike force of Orbital Drop Shock Troopers infiltrates Sword Base to take out Covenant anti-air turrets so reinforcements can land. On their way to the facility, the team finds an operational Scorpion Tank that they use to fight through Covenant forces around Sword Base. Meanwhile, the Falcons carrying the rest of Noble Team land at Sword Base and begin the assault.

Noble Six arrives at Sword Base, and the entire team pushes through to a set of pre-arranged coordinates. However, there is nothing there. Auntie Dot receives a set of revised coordinates from an AI of unknown origin, and a hidden door slides back to reveal an excavation tunnel. Noble Team rides a cart down the tunnel, where they find a large Forerunner cavern.

On the way down, Dr. Halsey reveals herself as the one who orchestrated their arrival. She asks for their assistance in defending her lab while she decrypts final information from the Forerunner ruins.

Noble Team uses Wolf Spider turrets to defend the lab as the Covenant begin their attack. They engage in an open firefight against incoming waves of Covenant and after a period of time, Dr. Halsey opens the doors to the lab.

Noble Team walks into the lab, revealing a large, glowing Forerunner artifact in the center. Dr. Halsey tells them about a great discovery that could change the tide of the war, and stresses that it is imperative that they get the information off-planet. She then shows them Cortana, who is revealed to be the AI that sent them the revised coordinates. She stores Cortana in a data storage unit and gives it to Noble Six, whom Cortana has chosen. Jun leaves to escort Halsey to CASTLE Base, while the rest of Noble Team gets into a Pelican to fly to the UNSC Pillar of Autumn that is awaiting their arrival. As they depart, a large underground explosion destroys Sword Base, denying the Covenant access to whatever remains of their research.

Fades in to the burnt and destroyed landscape outside Sword Base, in the Farragut Station area. A Falcon flies overhead as Noble Six walks out from a small hill. Six walks down the rocky terrain.

Six jumps over some boulders and lands beside three ODSTs.

Six signals "halt" and then "follow me" with his/her left hand.

The team moves down to the flooded Farragut Station in front of a Covenant outpost, comprising of a deployable lookout tower, Shades, a Ghost, and a group of infantry. A Falcon has crashed in the water between the generator and transmitter buildings.

After clearing the area:

They come across another deployable lookout tower and a Scorpion hidden from it.

More towers and Ghosts appear, but are soon eliminated by the team.

The teams finally reach the Airview Base, now the dwelling of two Covenant Tyrants defended by Covenant troops, Ghosts and Banshees. An aerial battle between Banshees and Falcons rages above them.

After destroying the second anti-air gun:

Falcons fly over Six and towards Sword Base. Six continues to the Sword Base's gate.

Six gets to Sword Base's gate area, defended by Covenant troops and vehicles.

If Six stalls at the gate:

Noble team finish off the Covenant in the courtyard. They enter the base and clear out the entrance. Noble Team heads to a door at the end of the parking lot.

Noble team enters the maintenance hall and climb up a series catwalks, engaging some Jackals on the way, finally arriving at the top and entering the security check, which has been severely damaged.

A door opens, and the team continues into Sword Base's main atrium.

The team eliminates the Elite forces defending the atrium.

The team continues to the coordinates. They come across a door with the ONI emblem on it.

Noble Team enters a corridor littered with dead bodies and destroyed equipment. An unmanned turret stands behind some sandbags.

Emile continues through the corridor: a dead end.

A sudden grinding noise cuts Jun's sentence off. Everyone raises their weapons. A wall in the dead end opens, revealing a secret passage. Emile stands in front of it, securing the way ahead.

Carter signals Jun to take point, and the rest of the team follow them into the hidden corridor. The team continues down the tunnel and find a tram. View turns to a security camera watching Noble Team entering the tram.

The view switchs into the tram as it starts to move. Dr. Halsey appears on a viewscreen.

Fades in to a camera overlooking the elevator traveling down to an ice cave. Cut to the Noble Six's view, him/her and the rest of Noble Team looking at the Forerunner cave complex.

This Cave is Not a Natural Formation

Noble Team moves out and explores around the cave complex. Four Wolf Spider turrets are located in different locations.

Covenant Dropships begin their descent from the cave's ceiling.

The team arrives at the lab's entrance. There are weapons holstered on the side and Mongooses parked near the entrance. Weapons crates and armor abilities at the side. Sandbags provide defense and Noble Team hold their position there.

Covenant Spirits and Phantoms are heard as they enter the area.

After defending the entrance for a while, Phantoms dropped down Wraiths.

Brutes joined the Jackals and Grunts while Plasma Mortar rounds hit near the entrance. More Phantoms appear. Banshees enter the battlefield to aid their allies.

A pair of Hunters and a lance of Covenant led by a Sangheili General are dropped from the Phantom right in front of noble team. They manage to kill the majority of the attacking Covenant troops.

Six activates the pad and the lab door opens.

The door opens and Noble Team steps in. They begin running into the corridor and reach the end of it: Dr. Halsey's lab. A large sphere-shaped Forerunner artifact hovers outside the lab.

Dr. Halsey, still in the middle of preparing the package, moves to another monitor.

Dr. Halsey looks at Cortana for one last time and shuts off her projection. Jun curiously looks around the lab as Dr. Halsey pulls out the data storage unit. Dr. Halsey, holding the unit with both hands, hands it over to Noble Six.

Six looks at Carter, who nods in response, and places his\her hands over the package.

Dr. Halsey lets go of the unit and Six looks at her. Fades out.

Jun and Dr. Halsey head into one Pelican while Carter heads on to the other. Six and Emile slowly walk back, securing the area. Cut to cockpit of the Pelican, Carter climbs into the pilot seat.

Six walks into the troop bay while Emile sits down on the open troop bay door of the Pelican.

Both Pelicans take off.

Emile shuffles backwards slightly as explosive charges detonate beneath the ice shelf, destroying what remains of Sword Base and the Forerunner complex. The surrounding waters pour into the opening, flooding the excavation area. 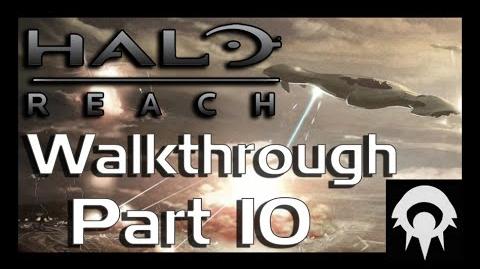 A Scorpion making its way towards a Type-38 Anti-Aircraft Cannon.

Jun, Emile, and Carter in combat against an Elite near the entrance to Sword Base.

A Scorpion in battle.

A screenshot of the Forerunner artifact.

The ruined interior of Sword Base.

Another view of the Forerunner artifact

The Artifact from above

Noble Six and two ODSTs advancing in a Scorpion tank.