For more articles of the same name, see Pillar of Autumn (disambiguation).

Aboard the UNSC Pillar of Autumn

the Battle of Installation 04

The Pillar of Autumn is the first campaign level of Halo: Combat Evolved and the Halo Trilogy. The UNSC Pillar of Autumn, having escaped the destruction of Reach, has arrived near a strange object. Unfortunately, the Covenant, who are here as well, having beaten the Autumn to the object, attack the ship. Master Chief Petty Officer SPARTAN John-117 is awakened from his cryo-sleep and makes his way to the bridge of the titular ship to be briefed by Captain Jacob Keyes about their current situation. After the brief meeting, the Master Chief, with his AI companion Cortana, makes his way off the ship via a Bumblebee escape pod.

This level is set in the UNSC Pillar of Autumn and mainly consists of training (below Heroic, or when the player first plays the game). The main objective of the mission is escaping the ship. This level is modified depending on the difficulty chosen. Sergeant Johnson makes different speeches at the beginning of the level, one for each difficulty. In Easy and Normal, the player goes through a testing diagnostic showing the bare basics of controls. In Heroic and Legendary difficulty, this is automatically skipped and the player immediately heads out to find Captain Keyes. On Easy and Normal difficulty, the motion sensor and grenades are disabled until certain moments in the level. On Heroic and Legendary, they can be used right from the start.

Fades into space. Halo is visible above Threshold.

The camera slowly turns and zooms in onto the Pillar of Autumn. Longsword escorts soar alongside.

Inside ship, the camera focuses on Keyes as he gazes out the bridge's front windows, possibly looking for any signs of their enemies.

Keyes begins pacing around, looking at viewscreens. Crew members he approaches stop to salute before returning to their patrols.

The crewman presses some buttons. The screen shows a diagram of Threshold with Installation 04 in orbit.

Keyes examines the main screen, pulls his pipe out of his mouth and shakes some ash off it. He closes his eyes wearily.

Alarm klaxon sounds. Crewmen run towards their stations as the ship goes to General Quarters and prepares for battle.

Cuts to the main hold of the Pillar of Autumn. A Marine waves light batons to guide a Pelican into the correct docking position. The view moves towards the lower deck.

Marines get in two lines, facing each other. Johnson walks down the column between the formation.

The Marines break formation and run out of the area, as Johnson follows them slowly.

Cut to a computer screen.

Note: Testing only happens in Easy and Normal difficulties.

The Chief looks around.

The Master Chief gets out of the cryotube.

Thom walks over, soon Master Chief follows him and stands on a red square.

If the Chief does not face Thom or begins to wander:

Chief turns to look at Thom, but isn't standing on the square:

When the Chief faces Thom and stands on the square:

Chief looks at the flashing lights.

The pitch is inverted.

The Chief looks at the panel.

The Chief decides the way he wants.

The Chief looks at Thom, but isn't on the square between the shield testers:"

The Chief steps into the square.

The Chief's shield meter appears, and charges to full.

The Chief's shields get depleted, and recharge themselves again.

Banging is heard on one of the observation chamber doors. An alarm activates and flashes red.

The door breaks open and a Sangheili Major fires on Sam.

The Elite turns around and tries to shoot at the Master Chief from above, but can't get through the glass. The Elite runs off.

If you play on Heroic or Legendary, gameplay begins here

Thom leads Master Chief out of Cryo 2 and down a corridor. Thom tries to open the second door, which explodes, killing him in the resulting blast that gets through. The Master Chief leaves the area and sees crewmen battling the Covenant while another crewman is killed by an explosion.

A few crewmen run into the room while the doors are closing.

A crewman runs away from the blast door, with a second directly behind him.

The crewman is killed by an explosion just as he reaches the blast doors, which shut slowly.

The Chief finds his way to another room where he comes face to face with a Minor Elite. It growls at him but is suddenly attacked by Marines, and the Elite flees. (Note: This Elite can only be seen in Easy and Normal difficulties.)

Through out all this, Cortana continues to coordinate the crew's defence against the Covenant boarders.

The Chief makes his way to a room where PFC Chips Dubbo is helping some crewmen battle the Covenant boarders.

The Chief follows Dubbo through a room full of dead or wounded Marines, possibly one of their armories. Outside there's another fight between the crew and the Covenant.

The blast doors close locking the Covenant out.

The Chief and Dubbo get to the bridge:

A loud explosion rocks the bridge. The Chief lurches and Keyes grabs a pedestal for support.

Cortana looks about the bridge for a moment, then sighs, lowering her head and accepting her orders.

Captain Keyes presses several buttons on the main control panel, then on the holotank, before he pulls Cortana's data chip out of the holotank and gives it to the Master Chief.

The Chief slides the chip into the back of his helmet.

Keyes hands his pistol to the Chief.

If the Chief lingers next to Captain Keyes:

If the Chief stays on the bridge but not next to Captain Keyes:

If you attack or kill Captain Keyes or any crewmen:

Invincible Marines come in and quickly kill the Master Chief, taunting him afterward.

Continuing, without killing anyone on the bridge, the Master Chief leaves the bridge. After killing a trio of Unggoy, he makes his way to the mess hall where groups of Marines are engaging the Covenant.

The Chief steps over a body of a dead Marine and picks up an Assault Rifle.

If the Chief takes a hit with his shields down:

The Chief leaves the mess hall and heads down a corridor. He comes across a group of three Marines fighting an Elite. After he helps them kill the Elite, the ship is rocked by a violent explosion.

An explosion comes from the airlock, caused by a Covenant Boarding Craft crashing into the ship, killing two Marines standing guard next to it as they are sent flying by the blast. Covenant troops pour into the corridor.

If the Chief goes inside the Covenant Boarding Craft:

When the Chief leaves the area:

Upon finding another trio of Marines fighting Covenant while taking cover behind Combat Barriers:

As the Chief comes into a room where the Covenant are on a ledge above him.

After the battle on the ledges:

As the Chief sees a lifepod launching with pulse lasers bursting all around the airlocks.

Plasma beams continue to hit the hull. Three lifepods launch from the airlocks in sequence. The third one is hit by enemy fire and explodes.

As the Chief passes some blast doors:

Note: The following only occurs in Easy and Normal difficulties.

The Chief approaches the first door. Red dots surround his position on the motion sensor.

The Chief finds an unlocked door leading into a darkened room.

The Chief encounters a broken door.

The Chief melees the door and it opens.

As the Chief crosses through the control room for his cryo bay, he sees a trio of Elites looking around in the bay.

The Elite intruders spot the Master Chief, open fire on him (with no effect due to the glass protection), and soon leave the cryo bay.

The Chief leaves the control room and makes his way to another access tunnel.

Later, while the Chief passes through a damaged part of the ship:

The Chief fights his way to the final airlock

When all of the immediate Covenant forces around the last airlock are defeated:

The Chief enters the last airlock.

The Chief sweeps his rifle into the hallway one last time to check for enemies, and then enters the lifeboat. He grabs onto a handhold on the ceiling after sealing the rear doors, while the Marine he picked up crawls into a seat.

The lifeboat launches out of the airlock.

The Chief pats him on the shoulder, giving the Marine slight encouragement.

The Chief steps up front. Halo swings into view and the Bumblebee drops towards it

The Chief dashes to the back of the lifeboat, and watches the Autumn.

The Autumn is struck multiple times by Plasma Torpedoes as it roars over the lifeboat and heads towards Halo.

The Chief grips the sides of the lifeboat, and bends his knees.

Cortana gives some advice to The Chief and Captain Keyes.

John-117 in the Cryo-chamber at the start of the level.

Crew in process of waking John-117.

Two Grunts on board the Pillar of Autumn

The Master Chief and a Marine engage an Elite 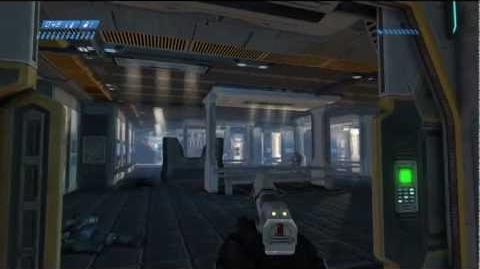 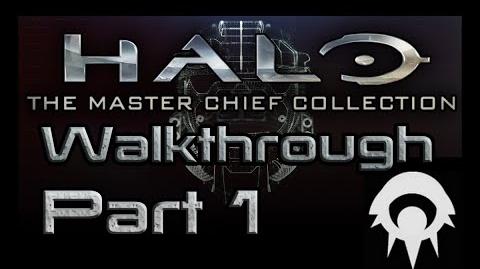