For more articles of the same name, see The Pillar of Autumn (disambiguation).

Beginning of Operation: RED FLAG, the Fall of Reach

The Pillar of Autumn is the tenth campaign level of Halo: Reach. The level takes place on August 30, 2552, near the ship-breaking yards at Aszod.

The Pelican carrying the remaining members of Noble Team is critically damaged and Carter-A259 is badly wounded. Carter orders SPARTAN-B312 and Emile-A239 to complete the courier mission without him, while he lures the Covenant away from the pair by using the Pelican as a decoy. Emile-A239 and SPARTAN-B312 execute a low-altitude jump from the Pelican outside of the dockyard and are forced to fight their way to the facility. After battling through several Covenant outposts, the two SPARTAN-IIIs are forced to continue their journey through a cave system to circumvent a large group of Covenant forces. Upon reaching the other side, however, they are confronted by a Scarab. Realizing that the Scarab's presence prevents Emile and Noble Six from moving on, Carter rams it with the Pelican, knocking it off a cliff and sacrificing himself in the process. The two SPARTAN-IIIs continue their journey and eventually reach the Aszod shipbreaking facility.

The two SPARTAN-IIIs are then hailed by Captain Jacob Keyes, whose cruiser, the Pillar of Autumn, is moored at the facility, and are ordered to clear a landing zone for the Captain, who will use a Pelican to retrieve the Package himself. Emile mans the facility's Mass Driver to provide covering fire against incoming Covenant Phantoms and Banshees, while Noble Six and surviving troopers engage the Covenant on the ground. Once cleared, Keyes' Pelican arrives and Captain Keyes retrieves the Package from Noble Six. As the package is handed over, a CCS-class Battlecruiser is revealed to be moving in on the Pillar of Autumn. Keyes orders Emile to fire on the advancing Battlecruiser, however, before Emile can oblige a Phantom attacks the landing zone, destroying one Pelican and deploying a group of Sangheili warriors onto the Mass Driver. Emile successfully kills one of the Sangheili with his shotgun before a second sneaks up behind him and impales him with an energy sword. Still alive, Emile draws out his kukri and stabs the Sangheili in the neck.

Keyes returns to the landing platform and offers Noble Six transportation to safety. The SPARTAN-III refuses in order to defend the Captain as he heads towards his ship and avenge his fallen partner. Using the Mass Driver, Six defends the site and stalls the Covenant Cruiser just as it is about to glass the area. After successfully halting the cruiser's attack, Noble Six looks on as the Pillar of Autumn takes off and heads towards space to escape Reach, with the package safely secured.

An overhead view shows Noble Team's Pelican being pursued by two Banshees and a Phantom.

The view zooms in and follows the Pelican.

The view switches to the cockpit of the Pelican, with Noble Six moving closer to the pilot seat. Suddenly, several plasma bolts hit the Pelican, impacting Noble Six, flickering the SPARTAN's shields. The view turns to the troop bay of the Pelican, and Emile-A239 is seen firing his Grenade Launcher at the two Banshees. Emile concentrates fire on a single Banshee, the grenade detonates close by, and the EMP disables the Banshee, which swoops up and crashes into its wingman. Both are taken out, but the Phantom still pursues. The view cuts back to the cockpit, and moves in front of Six. Carter, critically wounded but still in the pilot seat, takes off his helmet and throws it on to the ground. Blood splatters cover the cockpit window.

Carter-A259 turns back to Noble Six. His face is bloodied, and his armor is charred from plasma fire.

The view switches to Emile, pumping his left shoulder with his fist. In the background, two more Banshees appear.

Six turns and walks to the troop bay.

The Pelican turns and make the pursuing aircraft out of sight. Six and Emile position at the Pelican's tail, ready to jump off. Holding the AI data storage unit, Six crouch down as Emile grips the Pelican. Carter counts down with his fingers.

Carter counts down to zero and pumps his fist, giving his signal.

Six and Emile jump down, and the view switches to Six's point of view. They slide down a canyon, shields depleting slowly. They come to a stop. Six looks up as he/she and Emile's shields recharge. Carter's Pelican flies over them, more Banshees in hot pursuit. Six turns back, picking up the AI data storage unit he/she looks it over, checking for damage before hooking it on his/her back. They look up to the road up ahead.

Once More unto the Breach

Six and Emile continue through the narrow crack until they reach a cliff edge, overlooking a large area.

Carter's Pelican, still being pursued by Banshees, zooms away in a distance. After clearing the distracted Covenant troops, Emile-A239 and Six come upon a pair of Mongoose.

After traveling a short distance, the SPARTANs reach another open area. Heavy Orbital Insertion Pods drop and Covenant troops emerge from them. Suddenly, a Scarab drops from the sky.

Carter's Pelican reappears and distracts the Scarab by shooting its back.

More Orbital Insertion Pods drop, and another Scarab falls from the sky. After fleeing from the battlefield, the SPARTANs come upon a broken bridge.

A Phantom flies overhead as the Mongoose makes a successful jump. Barricades blocks the vehicle's way. Forced to leave their vehicle, Emile and Noble Six continue on foot.

After eliminating enemies or rushing through the area, Six and Emile go through a cave.

A Scarab suddenly walks down in front of Emile and Six.

Emile walks back in hesitation.

After noticing the two Spartans, the Scarab charges its main cannon, aiming at the two SPARTAN-IIIs. Carter's Pelican flies over and shoots at it. The Scarab is distracted and stops charging its cannon.

Carter sacrifices himself by ramming the Pelican into the Scarab's side as it charges its main cannon again. The Scarab's side bursts into flames, explosions rocking within it. The Scarab lets out a dying scream and struggles to stay on the cliff. More explosions rock it and it falls down the cliff. A deafening explosion is heard indicating its destruction. Cut to the two SPARTAN-IIIs.

Emile and Six enter another cave. The bodies of dead troopers litter the cave.

Drones attack the duo, the SPARTANs take the Covenant troops down. After taking down the buggers and Skirmishers, Emile and Six find the cave's exit. The Sinoviet facility is seen, with the grounded and scrapped UNSC Commonwealth now an enormous battlefield between UNSC and Covenant troops.

After fighting through the Covenant-infested frigate, the duo head into the factories, where they come across two Marines.

Six and Emile eliminate the hostiles in the smelting area and take care of the reinforcements. After clearing that area, they move on to the drydocks. Two Hunters and several Skirmishers patrol the entrance in. Six and Emile quickly take out the hostiles and head into the drydocks, where several Marines are attempting to fight some Covenant up at the upper level. The two assist the Marines and clear the top floor, entering a small corridor. An explosion triggers through the building, flickering the lights.

Two Marines are engaging a Jackal with a plasma rifle and two Grunts. Six and Emile help the Marines eliminate the enemy. They head into a hallway. At the end, two more Marines are hesitating at the exit to platform D.

Noble Six fights off numerous waves of Covenant Infantry while reinforcements from the Autumn fly in, eventually clearing the platform for Keyes.

Captain Keyes' Pelican makes it descent towards the landing pad

Keyes walks to the end of the troop bay with a few Marines behind him to meet Noble Six.

Keyes places a comforting hand on the Spartan's arm.

Keyes turns back towards the Pelican but stops short as a massive shadow appears in the sky. A CCS-class Battlecruiser pushes through the clouds, advancing towards the Pillar of Autumn.

Captain Keyes and the marines enter the Pelican, Noble Six takes out his/her Designated Marksman Rifle. A Phantom appears close by, and fires plasma bolts from its forward turret at the two Pelicans. The Pelican escorting Keyes' Pelican is shot down and crashes on the platform Noble Six is standing on. Six dives away from the burning wreck, and Keyes' Pelican flees. Six readies his/her weapon and turns as the Phantom wheels overhead towards the mass driver, but is forced to duck as the starboard door gunner fires another barrage of plasma at the SPARTAN. The Phantom drops off a pair of Zealots by the Mass Driver. One Zealot is visible to Noble Six, the second is concealed by the Mass Driver. Emile yells in surprise as the first Zealot raises its Energy Sword, but knocks it off its feet by a shotgun blast, it falls on its back to the deck. Emile stands over the Zealot, raises his shotgun, and fires again point-blank into the fallen Zealot's chest, killing it.

The second Zealot jumps and impales Emile from behind with an Energy Sword, then pulls the Spartan off the blade, holding Emile by the throat.

Still alive, Emile pulls out his kukri from his shoulder pauldron sheath and stabs the Zealot in the throat. The Zealot falls, Emile with it, his dying breaths can be heard. Keyes' Pelican returns to Platform Delta.

Six turns away from the Pelican.

Six moves towards the building housing the mass driver, but is confronted by a Sangheili Field Marshal and an accompanying squad of three Zealots. The four powerful Elites are in turn guarded by several Grunts and an Engineer (on higher difficulties). Noble Six kills the squad of Elites and Grunts and then fights and kills the Field Marshal before manning the mass driver.

Waves of Phantoms and Banshees attack the mass driver.

The Cruiser begins to charge its ventral energy projector.

If Six stalls even more:

If Six stalls too much: The Covenant Cruiser will start glassing the area, and you will instantly be killed by a blinding flash of light which will reload you to your last checkpoint.

If Six fires: The mass driver slug hits the ventral energy projector on the Cruiser.

The magnetic fields guiding the plasma destabilize, causing a massive explosion that rocks the ship.

The Pelican docks in time, as a few Marines run by the troop bay.

Easter Egg: At this point, if the right thumbstick is held to the right, one can see a SPARTAN-II inside a cryo-chamber. The identity of this Spartan is still unknown, some theorize that it is John-117


Noble Six climbs down the ladder leading to the mass driver as the Pillar of Autumn launches into the sky using atmospheric rocket pods. The Covenant cruiser crashes down in the background.

Six walks down the valley as the Autumn flies off into space. The view pans down to Six's legs and the destroyed cruiser.

Fades in to the Soell Star System. The Pillar of Autumn exits slipspace. The cruiser flies over view.

The Autumn slowly drifts off towards Installation 04 and Threshold. 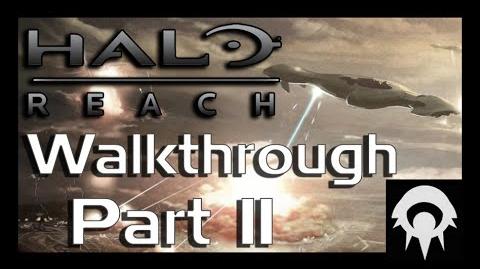 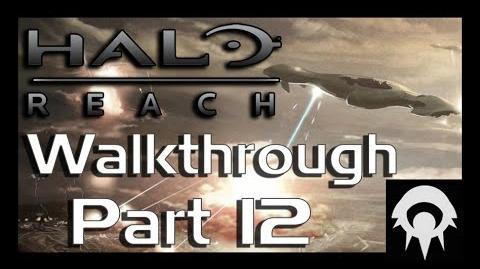 Concept art of the level where the UNSC Commonwealth is found

A Covenant fleet above Aszod.

The SPARTAN-II in cryo easter egg in the Pillar of Autumn's hangar bay.

The Pillar of Autumn flying towards Halo.

If you fail to hit the Cruiser