“Software simulations are held in contempt by the veteran instructors who run these training facilities.”
— The Pit's description

Set in a large hangar, The Pit, otherwise known as UNSC Training Facility B, is a small training ground for UNSC forces, located somewhere in Africa on Earth. A tarmac area, containing seven Pelicans and several Warthogs, can be seen through the fence outside, but is not accessible to the player unless playing in Forge mode. A is a symmetrical map, The Pit is multi-leveled, giving players many avenues and routes via ramps and walkways in which to hide and/or engage the enemy. While each side of the map is identical in geometry and weapon placement, several power weapons and Power-Ups exist in the central area. A Sniper Rifle sits on the bottom level of each base. The Pit's internal name during development was Cyberdyne and was first discovered shortly after the release of the Halo 3 Beta.

On either side of the map exists an identical base with identical weapon and spawn points. Each base consists of an upper and lower area, which mainly designates where the Sniper Rifle and Shotgun are located. The Upper and Lower bases are connected by walkways and ramps, and offer plenty of cover from enemy fire, as well as an assortment of weapons and equipment. The bases have very long sight lines and if a sniper were on top he/she would have a clear view of the other base.

Also known to players as "Sniper Tower" or "S2" (Sniper Level 2), this area of the base covers the three-leveled structure where the Sniper Rifle, Brute Shot and a Regenerator spawn. From the top of the tower, players can see directly into the other team's tower. Snipers often use this perch, as they have a field of view over their side of the map. This area of the base is located closer to the Energy Sword Room and Overshield Alley, giving players quicker access to those Power-Ups. A Turret is also located at the top of the tower, but players often become easy prey to snipers when mounting this weapon (the turrets are also in clear view of each other).

The area of the Lower Base is adjacent or similar to the Upper Base, but is considered much larger. In this area, players spawn in either a rectangular room with ramps leading to the shotgun or Upper Base. The Shotgun spawns in the farthest corner in a small hallway curving around the edge of the map. This open area features much of the combat, as it is multi-leveled with ramps that access the Rocket or Camouflage Hall, as well as the High Bridge and Sword Room. Players can pick from a selection of a Battle Rifle, Mauler, or two Brute Spikers. Above the Lower Base is a room which is only accessible by re-spawning or by butterfly jumping in it. This room is an excellent sniper perch. It is also a very effective hiding place in game types such as Team Doubles.

Also known as Longhall because of the lack of the rocket launcher in the MLG variant, this area of the map is aptly named for the Rocket Launcher that can be found here. It is often the area of heavy fire in the start of a round or game, with players rushing to secure the power weapon. Players spawning can also pick up a Battle Rifle or Needler on their way to the hall to assist in killing the enemy. Another common strategy when rushing for the rockets at the start of the game is to bank grenades off the wall so it hits the enemy when they go for them. This hallway essentially serves as a connection point between the Lower Base on each side of the map. The Needler run is usually an effective but suicidal attempt, so simply lob in grenades and take out any eager chargers with the Battle Rifle. Do not go in for the weapon until all is clear.

Also referred to as the "Green Home" or "Green Box," players rushing the Rocket Launcher often deviate from that path, and go the route of the Active camouflage power-up. This hallway is parallel to the Rocket Hall, and allows players to flank up behind the opposing team in hopes of killing them and allowing your teammates to secure the Rocket Launcher. This is the central-most location of the map, and players have access to any area from here. Walkways or ramps can lead players to the Upper Base or the Lower Base, the Rocket Hall, and the Sword Room.

Often called "Blue Room," "Control Room," or the "Sword Spawn," this area houses the Energy Sword. Although the Sword is located here, this area sometimes goes uncontested due to the claustrophobic nature of the curved hallway and limited cover; however, teams will sometimes camp in this room after securing the close range power weapons, such as shotguns and Sword, with the Regenerators also being valued as it makes grenade kills virtually impossible. It is very difficult to flush players out with grenades due to the curvature of the walls, which also make for devastating ambushes against a reckless player charging into the base unprepared.

It is possible to throw grenades, through a gap in the top of wall parallel to the entrances. It's also possible to get a Power Drain through the gap with a little luck and a good jump. A ramp on each side of the Sword Room gives players an entry and exit way to either Upper Base or Overshield Alley. Players may also take the high route, and travel across the "High Bridge" granting them access to the center area of the map. Maulers spawn on both ends of the tunnel closest to the "High Bridge," and a Power Drain is in the center of the bridge with Plasma Rifles to the sides, near the ramps leading to the Power Drain.

This area was originally supposed to feature real-time monitors of certain points on the map. Each screen originally displays what a certain camera placed on the map sees. This feature was removed during the development of this map due to network lag, but there are some modded maps that show the camera footage.

More commonly known as "Runway," the Overshield is located directly under the Sword Room, the Overshield alley has three ways in and out. The alley runs parallel to the Camouflage and Rocket Launcher halls, essentially connecting both Upper Bases. In the center of the alleyway, adjacent the Overshield, players can escape enemy fire by running underneath an opening in the wall, under the High Bridge/Sword Bridge. Players can also find a Battle Rifle at either end of the alleyway, granting them some long-range support. The Overshield is one of the key items before you go up to the Sword Room. So if it is possible, try to get the Overshield before you charge in or be the target of the enemy Sword.

Pit Stop is a Forge-altered variant of The Pit added into matchmaking on September 23, 2008.

Changes from The Pit

Outside of the map, there are three Warthogs, two of them are damaged, but the other one is an undamaged Troop Transport Warthog. The Troop Transport Warthog can be driven if brought into the main section of the level. To do this, you must glitch a teleporter on the other side of the fence. Once there, destroy the Warthog. After a very long time (15-45 min.), the Warthog will respawn. To get it inside of the map (so that you can drive it without being killed by the Guardians within five seconds), you must use Grav Lifts and flip the vehicle to get it onto an elevated gray platform outside of the map, and then onto yet another platform, from where it can be pushed into the map. You must be quick, if you are not quick enough, the Warthog will disappear and you will need to wait until it respawns back outside the map.

Just like in the Campaign, the back seats cannot be ridden in, but players can simply stand or crouch on them.

An outside view of The Pit

A player using a Troop Transport Hog on The Pit. 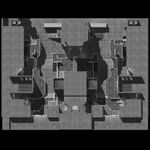 A birds-eye view of The Pit.

The Pit's Upper Base in view.

The Pit's lower base. 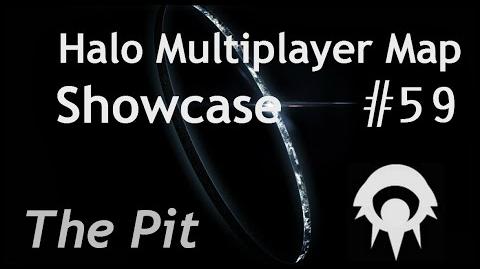