The Primordial, also known as The Timeless One,[2] The Captive or Prisoner of Charum Hakkor[3] is a creature of great power detained on Charum Hakkor. Unbeknownst to most of the galaxy, this creature is one of - if not the earliest Graveminds, as well as (quite possibly) last of the Precursors both in and outside the Milky Way Galaxy.[4]

The creature was discovered on a small planetoid on the distant edge of the galaxy by an Ancient Human researcher, named Yprin Yprikushma, who had excavated the planetoid and exposed the ancient capsule that contained The Primordial in viscous hibernation. Yprin recognised the Primordial as an important and ancient biological artifact, and transported it to Charum Hakkor for further research.[5] Despite the advanced nature of Precursor technology, the humans managed to find a way to communicate with the captive for brief periods of time. They came to regard the creature within the cell as an oracle of sorts, asking it questions in the hopes of gaining greater understanding. Most of the time, the prisoner's answers were confusing or unintelligible. When the Flood first made an appearance in the Milky Way, several humans questioned the prisoner as to the nature and origin of the "disease." When the prisoner gave them an answer, the humans present were so deeply horrified that many of them committed suicide following the encounter. It is unknown as to where the Primordial was kept during the Forerunner-Human war, although presumably with the Humans on Charum Hakkor.

Following the end of the Human-Forerunner wars, the Ur-Didact and a group of Prometheans gained access to the prisoner. It told the Didact that it was the last Precursor, and that the Forerunners had rebelled against the Precursors. The Didact told none of this to any, save the Librarian. When 032 Mendicant Bias tested a Halo in the Charum Hakkor system, the Halo's energies shattered every Precursor structure on the planet, including the prisoner's stasis capsule, thus freeing the prisoner. Realizing what he had uncovered, the Master Builder had the prisoner taken to Installation 07 so that it could be interrogated by Mendicant Bias. At some point during the long interrogation, which lasted roughly 43 years or 379,807 hours, the prisoner convinced Mendicant Bias to betray his Forerunner masters. From this point on, he began conducting experiments on the Human and Forerunner occupants of Installation 07, consisting of infecting individuals with the "Shaping Sickness," known more commonly as the Flood. At the end of Halo: Primordium, it is revealed that the prisoner is actually a Gravemind, re-enforcing the established canon concerning the betrayal of the Forerunners by 032 Mendicant Bias. In the ending of Primordium, the prisoner was captured by the Didact using ancient Precursor technology called a Reverse Timelock, which accelerated time within its immediate sphere, causing the Primordial to rapidly age and eventually decay. 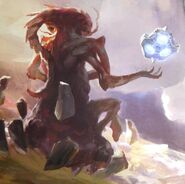 The Primordial with Mendicant Bias in Halo: Mythos.
Add a photo to this gallery

Retrieved from "https://halo.fandom.com/wiki/The_Primordial?oldid=1816141"
Community content is available under CC-BY-SA unless otherwise noted.