For the location, see Silent Cartographer.

The Battle of the Silent Cartographer

Two Pelican dropships, Echo 419 and Bravo 022, approach an island, low over the water. John-117 is inside the leading dropship, Echo 419.

Once the beach is cleared of Covenant hostiles:

As John boards the driver seat of the Warthog, two Marines occupy the passenger seat and the turret.

As the team approaches the main building:

(On Heroic / Legendary): "They're already inside! We need to get in there quick, before they discover the location of Halo's control center!"

As John-117 shoots his way into the facility:

John reaches the top of a slope that leads to an open door. A group of Covenant stand guard at the door, with a Zealot blocking the way in.

As John passes a path leading up into the island

If John passes the substation, which juts out of the cliffs:

After reaching the security override panel:

Alternative Dialogue: If the Security Station is entered before going to the auto-locking door to the map room.

Note: This causes the lines of Captain Keyes, the Marines, and Foehammer to not be told since the door is already open

Once John shuts the system down:

The previously locked door opens to reveal the Zealot Sangheili, which dashes out of the door in surprise.

If you shut down the security system first:

As John moves down the hall from the security substation, towards the exit:

A group of Stealth Sangheili attempt to ambush John. John defeats them and heads back up.

John exits the substation and sees Bravo 022's wreckage on the beach below. Marine bodies and Covenant forces can be seen around it.

John returns to the entrance of the Cartographer which is now guarded by Mgalekgolo. John defeats the Mgalekgolo and enters the structure once more.

Once you enter through the now-unlocked door leading to the shaft:

John-117 walks out onto the platform overlooking the shaft and kicks a loose piece of debris down it. It falls down the seemingly endless shaft.

As John moves farther down into the facility, into the third of four levels

When John finally reaches the Cartographer:

The Silent Cartographer holo display begins to spin, and the diagram of Halo begins to break into sections.

Covenant reinforcements, including the Zealot from the first cutscene, have retaken the upper levels of the facility, forcing John to fight his way back up.

Once John reaches the exit of the facility

As John boards the Pelican:

Echo 419 lifts off from the platform and rises quickly, circling the center of the island.

The structure where the first pair of Mgalekgolo appeared lifts up, revealing an underground tunnel; Echo 419 lowers into it as the structure returns to its original position.

Echo 419 continues to lower through the structure, the top closes with a crash before everything goes dark. 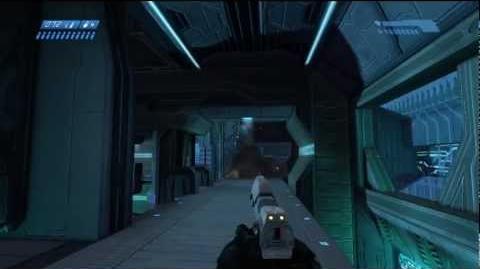 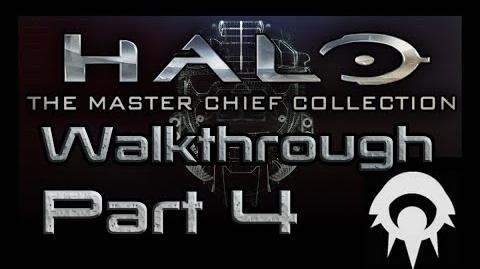