Voi, near The Portal, Kenya

The Battle of Tsavo

The Storm[2] is the fifth campaign level of Halo 3.

It all begins when a UNSC Warthog convoy moving to Voi, its objective to punch through the Covenant Loyalist Anti-Aircraft defenses that surround the supposed Ark and allow Lord Hood's small fleet of ships passage to the Prophet of Truth's fleet in order to kill Truth and stop the firing of the Halo rings. UNSC Marine forces, led by John-117, fight through several pitched skirmishes through the industrial zone of Voi.

After breaking through the industrial area, John-117 meets up with a group of approximately five Mongoose ATVs and commandeers one with a Marine riding pillion using a M41 Rocket launcher. They immediately engage a squadron of Anti-Air Wraith tanks to secure a landing zone as Choppers and Ghosts attack. The Covenant are being continually reinforced by Phantoms. Hornets and Banshees fly above, vying for control of the skies. Although they manage to take the landing zone, the victory ends up being short-lived as a Scarab arrives to crush the UNSC forces. After John-117 destroys the Scarab, remaining UNSC forces prepare to push into a Brute-controlled warehouse.

With reinforcements led by Thel 'Vadam and Sergeant Major Johnson along with volunteer civilians from a nearby factory, they push onwards, engaging nearly a dozen Brutes armed with Spikers and Brute Shots, a pair of Hunters, and a Brute Chieftain wielding a Gravity Hammer. They finally press on to the Type-27 Anti-Aircraft Cannon, engaging a small Covenant force defending it, including a War Chieftain. Eventually, they succeeded in destroying the gun, enabling three UNSC frigates to attack Truth's ship.

However, the ships are unable to deal any visible or significant damage to the dreadnought, which leaves through the wormhole. UNSC forces attempt to pursue the ship, but an unknown ship suddenly arrives via slipspace and crashes into Voi. Thel asks John if more Brutes had arrived, but John replies that it is even "worse."

A convoy of three Warthogs: two M831 TT Warthogs and one M12 Warthog LRV roll down a tunnel of Tsavo Highway, with the Chief riding shotgun in the LRV. (On co-op, Thel 'Vadam and N'tho 'Sraom ride shotgun on the TTs, but Usze 'Taham uses the Turret of the Warthog the Master Chief is riding on).

The Warthogs emerge from the tunnel in a parking lot scattered with destroyed Warthog chassis and Marine and Grunt corpses. The Warthogs roll to a halt as the Marines and Master Chief walk out, and the Marines form a perimeter outside the locked door.

The Master Chief opens the door into an empty factory section and then into a next section with Covenant. An M12 Warthog LRV and a sqaud of Marines follow him in.

A set of doors is opened, leading to a factory tunnel full of Brutes, Jackals, Grunts, and even a pair of Ghosts. Beyond that is another door that will lead to Lake Bed A. After cleansing the tunnel, the UNSC forces open the next door, revealing a massive expanse with cruising Ghosts and a heavy Covenant garrison.

A Phantom deploys a standard Wraith at the far side of the lake bed.

After the Anti-Aircraft Wraith in the nearby area is destroyed.

Master Chief and the remaining Marines exit the lake bed into the confines of the factory again, where a War Chieftain wielding a plasma turret and his attendant Brutes, Jackals, and Grunts have a pair of Marines pinned down in the adjacent section.

After the Chieftain and his troops are killed by the Chief and Marines:

If the Master Chief brought the Warthog from the last section:

The Marines defending the warehouse open the door. The Chief and accompanying Marines head through.

At the end of the tunnel are four Mongoose vehicles, next to a rack of weapons. Marines rush to man the ATVs.

The Chief opens the tunnel's door.

The Chief takes a Mongoose {or can take any other vehicle of choice} and joins the Marines in the assault on the Anti-Air Wraiths in the neighboring lake bed. While a small squad of Marines are pinned down on the boardwalk on the northern side of the lake bed, Covenant vehicles mill in the center.

The ATV's quickly take out the first Anti-Air.

A few Choppers along with Phantoms carrying Ghosts overwhelm the lake bed with Banshees above. The second Anti-Air Wraith is taken out. The ATVs, Hornets, and Missile Pods eventually clear the lake bed of Covenant resistance.

There is the booming of the anti-aircraft emplacement in the distance, but also an ominous mechanical grinding noise.

The booms and grinding get louder.

A massive Scarab walker lumbers down from the roof of the factory onto the lake bed, and dust rises as its legs slam into the ground, destroying a Troop Transport Warthog in the process. Marine vehicles and a pair of Marine-manned Missile Pod turrets open up in volleys.

If the Chief waits around:

If the Chief wastes more time:

The Chief, Marines, and Missile Pod emplacements eventually take out one of the Scarab's joints, forcing it to lower and consume all power into getting back up again, and deactivating its primary weapon.

Once the Chief boards the Scarab.

On the upper deck of the Scarab, several Brutes, Jackals and Grunts await the Chief, forcing the Chief to kill anyone in his path.

If the Chief stays on the Scarab for a while.

The Chief finally finds and overloads the power core.

The Chief jumps off the Scarab and runs for it. The Scarab detonates violently.

A Pelican lands, deploying Thel 'Vadam. The surviving Marines lead 'Vadam and Master Chief to a locked door leading to the factory's warehouse.

The door opens up, leading to a dirty tin-walled section filled with wounded Marines and civilians laying on the floor. Several grim-faced Marines are standing behind sandbags, tending to the wounded, and operating the sole UNSC field radio available.

Voices begin to play through the radio and are attentively monitored by a pair of Marines operating it.

There is a moderate pause within the radio conversation, before another starts between Commander Keyes and Lord Hood. This conversation foreshadows the very end of the last cutscene in the level.

John-117 and Thel 'Vadam pass through a stained area of bolted tin plates until they reach the periphery of the warehouse, where a trio of Marines are pinned down under sandbags as Spiker projectiles fly through the air. Farther forward is a steel bridge where a pair of Marines frantically open fire on Brutes all around them with a AIE-486H Heavy Machine Gun.

After the Brutes between the sandbags and the bridge are killed by the UNSC forces, another group of Brutes charges from the next section, chasing two Marines.

A surviving Brute from the previous wave tries to warn the charging Brutes of the impending doom but is too late.

They then run towards the bridge and a Marine fires the bridge-mounted turret.

After the next wave of charging Brutes is killed.

Master Chief, 'Vadam, and surviving Marines make their way into the next section, where behind a mass of stacked crates a Brute violently throttles a construction worker. Three other workers armed with Pistols flee from the Brute and his pack. The throttling Brute roars out.

After the current group of Brutes are killed:

The next section is littered with civilian corpses and a few live Factory Workers cowering in the corner. A door leading to the outside of the factory is nearby. The door is opening up, and a group of four construction workers runs in. However, they are cut down by two massive green beams of energy blowing up the Fusion coils next to the workers: a pair of Hunters appears.

The Hunters charge in over the worker corpses and after the Master Chief, Thel 'Vadam, and the awaiting Marines. The cowering workers get up and are relieved to see fellow humans.

Their celebration is cut short for they sight the Hunters and retreat behind the approaching Marine forces.

If the fight continues for a while:

Gunnery Sergeant Marcus P. Stacker: "Gotta get around ‘em, Chief! Look for gaps in their armor!"

After the two Hunters are killed, the Marines, Master Chief, and Thel 'Vadam run past the Hunter corpses and through the open door to a series of low-roofed buildings where a Brute Chieftain awaits with numerous other Brutes, Jackals, and Grunts. The Prophet of Truth sermonizes from a holographic pedestal behind them.

The assault force finally defeats the Covenant defenders and continues on ahead.

The Chief, 'Vadam, and the remaining Marines charge around the remaining buildings to the hill where the massive anti-aircraft emplacement stands. Before the hill's slope are a Marine, a Surface-to-Air Missile Launcher, and a few corpses behind sandbags and a weapons rack. Grunts tentatively run down the slope to face the onrushing UNSC forces while mid-way up the hill a Grunt manning a turreted Plasma Cannon stands side-by-side with a War Chieftain wielding a Fuel Rod Gun with his captains and bodyguards. The anti-air emplacement opens fire on a surging UNSC Longsword, destroying it and catching it on fire as the wreck soars into the cliffs below.

The Chief, 'Vadam, and all Marines and civilians push up the hill, taking down all Covenant defense.

If the Chief delays:

The AA Gun explodes, sending the upper section flying down the cliff. John-117 and 'Vadam stand on the cliff side of the crater on the hill of the recently destroyed anti-aircraft emplacement. Multiple squadrons of Longswords streak overhead, followed by three UNSC frigates, including the UNSC Forward Unto Dawn, Lord Hood's flagship. The Covenant fleet is hovering before them, with the Forerunner dreadnought centered below them at the center of The Artifact.

A large glowing sphere of blue light soon appears, centered by pitch darkness, in the sky above the artifact, and the vessels of both UNSC and Loyalist fleets are drifting in the air, disorganized. The large fins of the Portal are focusing energy on the sphere.

Thel 'Vadam roars angrily as the Forerunner dreadnought rises safely into the sphere, followed in close order by the rest of the Covenant fleet.

The Indulgence of Conviction emerges from Slipspace to the east of Voi, and hurtles just over John and 'Vadam. It is smoking with rancid fumes. The air is darkened and smog rises, veiling the sun. As the ship loses altitude and crashes to the ground out of sight, there is a flash of light and a deep rumbling is heard, followed by an eerie silence. An omen of ancient evil is in the air. 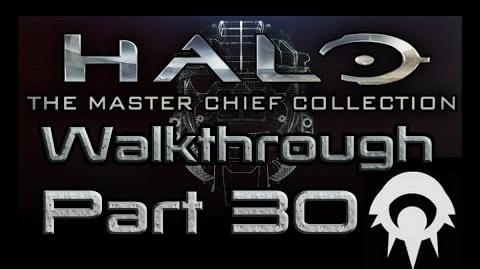 The UNSC initiates an attack on the Forerunner dreadnought.

The Loyalist Fleet follows the Prophet Of Truth into the Portal.

The Boat that resembles Master Chief's Helmet. You can see it better if you look at the bottom upside down.

A Type-52 Anti-Aircraft Artillery fires on a Hornet. 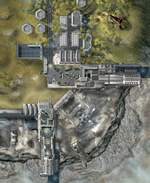