Were you looking for Truth and Reconciliation, the CCS-class battlecruiser?

In the canyon below and aboard the Truth and Reconciliation

The Raids on the Truth and Reconciliation

The Truth and Reconciliation is the third campaign level of Halo: Combat Evolved. The Master Chief and a team of Marines must rescue Captain Keyes, who is being held captive aboard the Covenant ship, the Truth and Reconciliation. After boarding the ship by using its Gravity Lift, the Master Chief fights his way through the interior of the Covenant battlecruiser to rescue Captain Keyes and several other prisoners from the ship's brig. This is the first level in which Hunters, Zealot Elites and Stealth Elites are encountered in the same level.

The view pans across a plateau with a Covenant CCS-class battlecruiser above it.

Pelican Echo 419 comes into view, it starts to land.

As the Pelican lands:

The Marines and the Chief head forward.

Once the Covenant spots the Chief.

If all the Covenant soldiers are not taken out yet, a Grunt will run towards a Shade turret.

Once the area is secure:

The Chief starts to move up the slope.

As Fire Team Charlie move further up the plateau.

If the Chief takes the left flank:

If the Chief moves up the middle:

After the Chief takes out most of the Covenant infantry:

After area is secure:

If three or more Marines from the team are killed:

As another Spirit approaches:

After the team kills everything, including a pair of Hunters:

Marines gather under the grav lift

If any of the Marines are KIA:

Marines exiting the Pelican greet the Chief before taking position around the lift.

Into the Belly of the Beast

The Marine begins to float into the air.

Once the team gets inside:

The bay doors open and Covenant troops begin to attack the squad.

The Chief and the Marines fight off multiple waves of Covenant reinforcements attacking from all sides. After the last wave has been defeated, a pair of massive blast doors open to reveal a Hunter pair.

Once the Hunters are killed:

The team exits the cargo bay through the open doors the Hunters came through. They head down the corridor but are stopped by a second set of blast doors:

As the Chief goes alone and makes his way to a balcony overlooking another cargo bay:

The Chief makes it to the ground level and opens the door, letting the rest of the team inside.

After the cargo bay has been secured:

The team soon enters a large docking bay just in time to witness a Covenant dropship taking off.

If three or more Marines are dead:

The Chief and the rest of the team go around the docking bay battling multiple waves of Covenant.

When the team reaches the door on the other side:

Once you kill the pair of Hunters:

The Chief leads the team up to the second level.

If every Marine in the team is dead, as the Chief approaches the second level of the docking bay:

As the Chief disengages the energy shield over the bay doors:

The Chief leads the Marines up to the third level.

Once the team reaches the ship's bridge and kills all the Covenant forces inside including the Zealot Shipmaster:

The Chief heads off to rescue the Captain.

When the Chief come across an empty brig:

When the Chief comes across an occupied detention center:

When the Chief kills all the Covenant guards including two Stealth Elites and another Zealot:

The Chief opens all the cells.

The Chief helps Keyes to his feet

Keyes and the Chief leave the cell. Keyes addresses the freed Marines.

The three freed Marines, each armed with a Plasma Rifle, assemble in front of the Captain.

The Captain picks up a fallen Needler.

Shut Up and Get Behind me… Sir

A pair of Stealth Elites armed with Plasma Rifles charge into the brig and the fighting resumes.

If Captain Keyes dies at some point:

The game then reverts to the last checkpoint.

After fighting their way back to the bridge, the Chief and the others discover that Sergeant Parker and his squad have been killed by two Stealth Elites with Energy Swords.

After the Stealth Elites have been killed:

The doors to the bridge open and a horde of Grunts attack from all sides. The Chief and the others repel the attackers. The Chief then takes the Captain and the Marines back to the hangar.

Once you release the dropship from the clamps:

A pair of Hunters appear and start firing on the dropship

He rams the two Hunters with the dropship

The Spirit flies out of the hangar. Fade to black.

Marines securing the hallways of the ship.

John-117 leads Marines through the Truth and Reconciliation's interior.

One of the destroyable wraiths on the level

John-117 walking through the level.

The Belly of the Beast

The View of Threshold

View of the Ring

An Elite charging the player on the Truth and Reconciliation 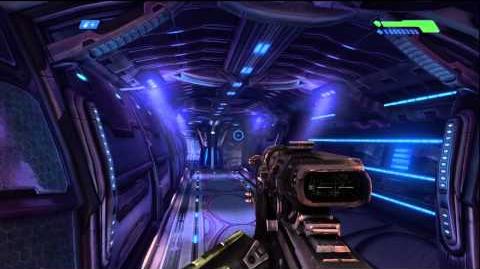 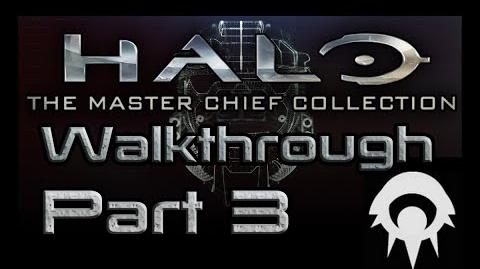