Threshold is a planet in the Soell star system.[4] It is an immense gas giant with a radius of 107,302 km (66,674.5 miles). It has twelve natural satellites, including Basis. Threshold is a neutral location.

Over 100,000 years ago, Threshold was a part of the sizable and extensive Forerunner empire. They built an extensive automated, viable series of refineries and Gas mines in the upper atmosphere of the planet,[2] likely harvesting the hydrogen gas of the planet. The hydrogen was probably used as transmutation material for construction, though this is not confirmed. At least 10 of the moons had various Forerunner facilities on them or were completely artificial themselves. UNSC evidence suggest that these facilities were for the maintenance of Installation 04.[2]

Several hundred or thousand years later, upon the discovery of the Flood, the Forerunners refitted the Gas Mines to serve as Flood research facilities. These facilities proved only one thing: more extreme measures were needed to combat the Flood and to keep them from spreading. The Forerunners then chose the planet as a staging point to place one of their massive fortress worlds, known as Halo and numbered as Installation 04. The Halo was placed on the Lagrange point between Threshold and Basis and was designed to destroy all sentient life in the galaxy, thereby halting the spread of the Flood, due to starvation.

In 2552, the Covenant were looking for an artifact from Sigma Octanus IV to uncover this planet as the location of the "Sacred Ring," in order to start the Great Journey. The Fleet of Particular Justice followed the UNSC Pillar of Autumn there, and, in a series of events, Installation 04 was destroyed.[5] In the Skirmish over Threshold after the ring's destruction, Cortana was able to jump into Slipspace with the Covenant flag ship Ascendant Justice while in Threshold's atmosphere.

Main article: Battle of the Gas Mine

The Heretics then took refuge on the Gas Mine (they had been based at a makeshift camp on Basis until this point) before the Arbiter, Thel 'Vadamee, and his Special Ops troops dropped it into Threshold's depths. High Charity and its fleet briefly visited Threshold as well, until they jumped to Installation 05.[6]

Later in October, the UNSC prison ship Mona Lisa ended up picking up Covenant survivors over Threshold including one infected by the Flood. ONI began experiments with the Flood on the ship before the Flood escaped and the Mona Lisa was destroyed by a nuclear missile fired by the UNSC Red Horse. Also in the system at the time was a single Covenant ship apparently left behind to monitor or guard the Halo's remains, which were gradually being pulled into Threshold and destroyed.[7]

After the end of the Human-Covenant war, a 500 light-second exclusion zone was established around Threshold. Both UNSCDF ships and Sangheili ships patrol around the area. However, the area is incredibly dangerous featuring: uncontrollable Sentinels and other Forerunner artifacts, and unstable Halo fragments and debris. The Flood still exist in certain areas of the debris.[2]

Threshold is an immense gas giant, far larger than Jupiter from the Sol system. Its moon, Basis, is in fact the size of a huge rock planet. Basis' diameter is nearly double that of the Earth.

The atmosphere is made up of white Ammonia clouds, amber-colored Ammonium Hydrosulfide clouds, Phosphorus compounds, ice crystals and other gases.[3] These other gases include Hydrogen, Helium, and Methane.[1]

Threshold is known to have storms in its atmosphere similar to the storms that occur on the planet Jupiter, since there was a large storm present at the Battle of the Gas Mine.[6] 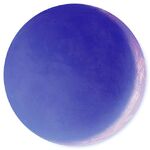 Another view of Threshold in its more blue colouring.

Basis, one of Threshold's moons.

A destroyed Installation 04 in orbit above Threshold.

The gas mine of Threshold (Halo 2: Anniversary).

A Covenant fleet nearby Threshold.