“An enemy behind every tree!”
— Timberland's description

Timberland is a multiplayer level exclusive to Halo PC.

It features two, two-story bases (nearly identical to those in Sidewinder, but with some subtle differences) separated by steep hills, trees and a small creek. In general the map is very symmetric, which makes Timberland one of Halo PC's best maps to play CTF or Assault.

The map has several control points and many aspects which suit it for competitive games. Along with an Overshield in the middle sitting on an island in the creek, it has an Active camouflage on either side and one inside the small waterfall(much like in Beaver Creek). The symmetry of Timberland makes it a balanced map. In terms of weapons with the gametype weapon settings on normal, four Sniper Rifles spawn, two Rocket launchers, and two Fuel Rod Guns each of these weapons spawn opposite to their counterparts with respect to the Overshield in the center of the map. The level also does not have any teleporters, making for more intense gameplay.

A river on Timberland 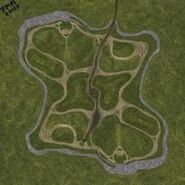