This article is about the level. For the Halo: Reach song, see Tip of the Spear (Music).

Tip of the Spear is the fifth campaign level of Halo: Reach.[1][2]

Upon completing the level on Normal or higher, the player will unlock the To War achievement and 10 Gamerscore.

After Jun and Noble Six's discovery of a hidden Covenant army, the UNSC decide to execute a large counter-attack against the Covenant. Throughout the battle, Catherine-B320, Noble Team's second-in-command, and Noble Six are able to destroy two Covenant anti-aircraft guns which makes it possible for two UNSC Frigates and several Longswords to bombard Covenant ground forces (which leads to the destruction of at least three Scarabs).

After killing a Zealot and destroying another anti-aircraft gun, Noble Six joins Jorge-052 to destroy a large tower, designated "Spire One," acting as both a cloaking device and teleporter around a Covenant base. After their Falcon makes its way through the Spire's energy field, the craft is disabled by an EMP pulse, which sends it crashing to the ground, killing the crew. The Spartans, Noble Six and Jorge-052, have to complete the rest of the mission on foot or in a Spade (or via hijacked Banshee). After deactivating Spire One's energy shield, Six leaves the area on a Falcon accompanied by Carter-A259 and Jorge-052 as the UNSC Grafton destroys the Spire with its MAC gun. Immediately after the tower collapses, the Grafton is shot and destroyed by the Covenant Supercarrier Long Night of Solace.

A convoy of Scorpions, Warthogs, several Mongooses along with AMX-4 Falcons and two Pelicans advance across a bare plain.

The Warthogs, led by Kat and Noble Six, charge towards the Covenant landing zone, followed by a group of Falcons. Carter is revealed to be on board a Falcon overlooking the Warthog driven by Kat. Noble Six rides shotgun in Kat's Warthog.

At this point, the subtitles show Jun saying, "Time to bake that cake we made last night!" The dialogue was confirmed by Bungie to have been a last-minute change.[3]

Kat detonates the charge that was planted on the pylon in the previous mission by Jun, which is seen far to the right of the advancing Warthog strike force. The distant pylon explodes.

Banshees swoop down on the convoy and open fire, while Wraiths lob mortar rounds from a distance. The gunners on the Warthogs retaliate, firing at the Banshees. Wraith mortar rounds tear into the convoy and destroy several of the advancing vehicles. Kat and Noble Six dodge the mortar fire, and turn towards a bridge across a deep chasm, but as they prepare to cross, a mortar round destroys the bridge.

Kat accelerates and the Warthog manages to jump the gap in the destroyed bridge, but crashes violently on the other side, killing the gunner and sending Kat and Noble Six flying.

Fade back to Noble Six's point of view, which is hazy. The SPARTAN is lying stomach-down after the crash, with a grenade launcher lying several feet away. Vision clears, and Six looks toward the destroyed bridge. A second Warthog attempts to clear the gap in the bridge but fails, sending its screaming crew into the chasm.

Six grabs the Grenade Launcher on the ground.

Kat and Six encounter heavy resistance as they move up the hill, including two Fuel Rod Shade variants. After eliminating the enemy forces in the area, a Pelican shows up with a Rocket Warthog.

Kat and Six drive a short distance before arriving at the AA gun.

As they approach the gun, a furious battle can be seen in the valley below. Three Scarabs and multiple Ghosts, Wraiths, and Banshees attack a large group of Warthogs, Scorpions, and Falcons.

Kat and Six proceed to the AA gun, encountering resistance along the way. Six eventually makes it inside and destroys the gun. Alternatively, Six uses heavy weaponry to destroy the AA gun.

After the AA gun is destroyed, three Longswords and two heavy frigates, the UNSC Grafton and the UNSC Saratoga, fly overhead.

The frigates open fire on the Covenant forces in the valley, as 2 Lima 4 commences a bombing run on the three Scarabs, destroying two of them and disabling the third, which detonates seconds later.

Kat and Six proceed on, soon driving under a partially destroyed bridge. A Pelican, while under fire from a Phantom and a Wraith, drops off a portable bridge, allowing Noble Team to continue. They soon arrive at a mining facility that is across a canyon.

The Spartans arrive at a bridge over the canyon. Several Army troopers are under fire from Covenant troops and a Shade turret, which are soon neutralized. The Spartans and troopers advance on the BXR Mining facility.

They move into the facility, encountering resistance as they go.

The Spartans move farther into the facility, eventually finding the Zealot and a moderate amount of Covenant forces, including Special Operations Unggoy.

If Six eliminates the Zealot:

The Spartans reach the end of the facility, finding a Plasma Launcher along the way. Then, Kat and Six move outside to find two Unggoy, two Ghosts, and a Revenant. Kat and Six commandeer a vehicle, moving up the trail.

Kat and Six arrive at the second AA gun and engage a large amount of Covenant forces, including two Wraiths and a Hunter pair.

After neutralizing the Covenant forces in the area, Six destroys the AA battery by disabling the power core, or using a vehicle. A Phantom arrives nearby, dropping off reinforcements. Then, a Pelican deploys a squad of troopers to assist the Spartans defeat the reinforcements.

A navpoint appears on Six's HUD.

The Falcon takes off, heading into the canyon.

The Falcon flies along the river It eventually reaches a bridge, with Covenant forces attempting to cross it.

Six eliminates the forces on the bridge. Jorge and Six encounter more resistance further down the canyon, including Wraiths and heavy infantry.

The Falcon approaches a spire that is shielded.

They arrive at the edge of the shield. The pilot hesitates, hovering just outside it.

The Falcon flies towards the shield, the screen flashes white.

The Falcon loses its power, via the EMP effects of the shield, and begins to spin out of control.

The Falcon crashes. Six is thrown a short distance from the Falcon. Jorge emerges from the Falcon, tossing out equipment. Six grabs a nearby rifle on the ground and stands up. After looking around briefly, Jorge picks up his gun.

Jorge and Six move across the river.

The spire comes into full view. A Phantom seemingly appears out of nowhere in the spire's midsection, and flies away.

Noble Six eventually makes it to one of the gravity lifts, sending him/her up to the top of spire. Alternatively, Six hijacks a Banshee and flies to the top.

Noble Six proceeds to eliminate the Covenant forces at the top of the spire. An Elite Ultra, seen manning the controls of the spire, draws his Energy Sword as soon as Noble Six engages him.

After Noble Six eliminates the hostiles in the spire and proceeds to the spire controls.

Six powers down the shield.

The shield dissipates. Six sprints for a Falcon and leaps off the spire and is caught by Jorge, who pulls Six up into the Falcon.

The Falcon begins to pull away from the spire.

The UNSC Grafton, in a shallow dive, moves towards the spire past the Falcon with Six, Carter, and Jorge. The Spartans brace themselves.

The Grafton continues to move towards the spire, and, with a bright flash, fires its MAC cannon, hitting the Spire and shattering it. Jorge, satisfied, turns back and nods at Carter and Six, failing to notice as a purple glow illuminates the sky above the Grafton. An energy projector beam shoots down from the sky and hits Grafton's bow section, instantly gutting the ship. Secondary explosions blossom along the hull, and Grafton begins to plummet towards the ground.

The Spartans watch as the aft section of the Grafton explodes. The forward section crashes to the ground.

As the shattered UNSC Grafton falls towards the surface, a massive CSO-class supercarrier, the Long Night of Solace, is revealed holding position over the destroyed spire. 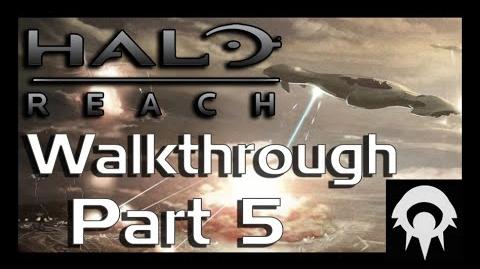 Halo- Reach Walkthrough - Part 5 - Tip of the Spear - No Commentary