The Tribute Room is an easter egg that can be found in the campaign level The Package of Halo: Reach. The room is Bungie's indirect thanks to parties who have expanded the Halo franchise completely independently of Microsoft and Bungie. The easter egg can be found on Rally Point Bravo of The Package, on the Legendary difficulty. The room can be found on the far left side of Halsey's lab entrance (Assuming you're facing away from the base), though the door will not open initially. Access to the room can be achieved by completing the objective without opening Halsey's door, then traveling to the end of the map directly opposite to the Lab entrance. Once across the bridge bear left to a caged area. Behind and below this cage outside of the map's boundary, is a switch, which requires one to activate it and quickly get within the maps boundary again, lest the timer will expire and they will die.

There are two methods to hit the button that opens the Tribute Room. For the first method, the player must use a jetpack to fly from the top of the building down to where the switch is and hit the switch. There is only a very small area of the ground that will not instantly kill any player standing on it, so you must land very precisely, or hover. The second and much easier method is by using sprint. Once the player reaches the cage-like area, they must sprint around the building, or they may be killed by the death barrier. Once they hit the switch, then they must again sprint around the building and jump over the fence to survive. Due to the difficulty of this task it is recommended to complete the level on split screen or online with a friend, to prevent being sent back to the checkpoint upon every unsuccessful attempt. It is possible to survive using either method.

Once the switch has been pressed, all of your AI allies will disappear and 7 Sangheili Generals will leave through the door. They can run very fast, but they will only attack with swords and grenades and so are relatively easy to defeat. After entering through the door and at the far end of the room, you will be teleported to the corridor from the level's ending cutscene, with your loadout switched to the Assault Rifle, no ammo or grenades, and no armor ability.

The room itself is Dr. Catherine Halsey's lab from the level's ending cinematic. As the player enters the chamber, two songs can be heard in random order: Siege of Madrigal; the second time in the game, the first being the Club Errera easter egg. Another song is also played; this is a unique song which is not heard at any other point in the series, but appears to incorporate themes from pieces such as Delta Halo Suite and Roll Call.

Inside the Tribute Room are seven databases that hold a collection of information in the form of textual documents, similar to the data pads. The documents, mostly written from Halsey's point of view, reference to Bungie-related topics, most of them dedicated to the fan community; the Seventh Column, Halo.bungie.org, Red vs Blue, Warthog Jump and the Bungie.net forum moderators. One terminal is dedicated for Bungie's charity projects, including "Fight the Flood" after hurricane Katrina in 2005 and "Be a Hero" during the 2010 Haiti earthquake.

Several Bungie- and Halo-related posters can be seen in the hidden chamber:A picture of John rushing the beach in the Silent Cartographer Level from Halo: Combat Evolved, a Halo 2 launch poster featuring John-117 dual-wielding a pair of SMGs, a landscape image of Master Chief standing with his weapon in the alert position in Halo 3's Sierra 117 level, and the first frame of the opening cutscene from Halo 3: ODST. Bungie's "carnage zone" warning sign can be seen on the wall near the entrance, and a picture with Ling-Ling's head is shown on one of the desks.[1] A picture of Marty O'Donnell and Jason Jones can also be found, as well as a photo of Bungie's Seven Steps to World Domination, Halo 3: ODST's title screen, and a Bungie "Don't Make Us Kick Your Ass" logo placed on a desk. The hidden Xbox 360 is in this room, but it appears upside down. Dr. Halsey's personal journal can be found next to Cortana's terminal, which also has a screen that displays an exchange between Cortana and Halsey, concerning Cortana's transfer to another data storage unit. There is a door switch next to the room's entrance - activating the switch will trigger the ending cutscene completing the mission.

Another view of the Tribute Room.

The Rookie from the Halo 3: ODST title screen.

A picture of Bungie's, "Don't Make Us Kick Your Ass" logo.

Noble Six inside the tribute room.

The screen on Cortana's terminal with Dr. Halsey talking to Cortana about being transported to the package. 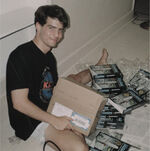 Picture of Jason Jones, Co-founder of Bungie in the Tribute Room.

Martin O'Donnell.
Add a photo to this gallery

Retrieved from "https://halo.fandom.com/wiki/Tribute_Room?oldid=1798733"
Community content is available under CC-BY-SA unless otherwise noted.