Tundra is a Halo Wars multiplayer map.[1][2] It is set on snowy terrain, featuring three craters and a frozen lake.

It is a snowy and rocky map with large impact craters from crashed ships. This map features a single Mega Turret in the center of the map. This turret can provide an advantage when attacking your enemy's base. 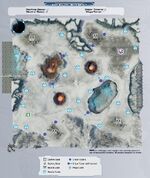 A strategic map of Tundra.
Add a photo to this gallery

Retrieved from "https://halo.fandom.com/wiki/Tundra?oldid=1794384"
Community content is available under CC-BY-SA unless otherwise noted.